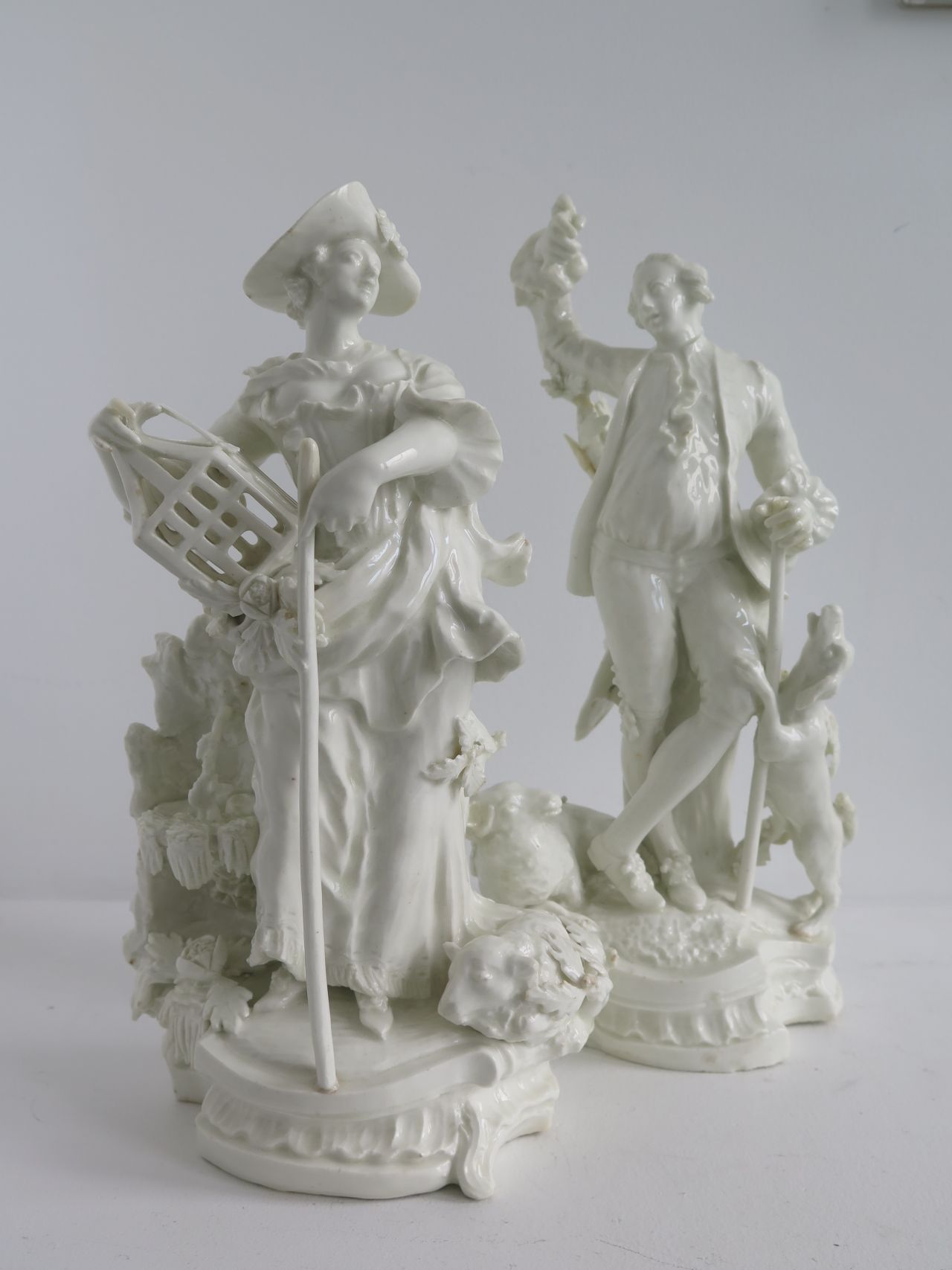 The Bow glazed soft-paste porcelain figures of the Shepherd and Shepherdess are considered to be one of the earliest representations of this couple in English porcelain.

The Shepherd and Shepherdess porcelain figures represent Liberty and Matrimony The man is standing and releasing a bird into the air. He has a ram and dog at his feet and is supported by a roughly hewn tree trunk. The tree trunk was designed to strengthen the figure whilst it was being fired in the kiln. The woman has an ewe at her feet and holds an open birdcage as she stands beside a fountain.

The birdcage with the Shepherdess represents the social constraints of marriage whilst the man and his bird represent the freedom of the single state. Conversely some porcelain figures were produced with the gender of the bearers reversed where the man holds the cage and the woman the bird.

Most European porcelain factories copied small-scale porcelain sculptures created by Johann Joachim Kändler (German, 1706–1775), chief modeller at the Meissen porcelain manufactory from 1733 until 1775. Kändler is thought to be the greatest ceramic sculptor in the history of European art. He made some of the most famous figurines. Small-scale porcelain sculptures were produced for table decoration replacing the use of sugar and wax mould statuettes, which had been in use for this purpose since mediaeval times. They mostly included court scenes, shepherds and shepherdesses, animals, allegories, Chinamen and Turkish figures.

Thomas Frye, an Irish engraver and his business partner, Edward Heylyn founded the Bow porcelain factory in 1730. It was the first English purpose-built porcelain factory and was built in the eastern end of London. The factory was modelled on Cantonese warehouses of the East India Company.

Thomas Frye introduced the use of bone ash in Bow porcelain. Bow produced a wide range of porcelain, including many ordinary household items, which varied in quality and appearance. The earliest porcelain mini sculpture pieces were of soft-paste and bone ash. This combination became the source material for a precursor of bone china resulting in pieces that appeared whiter and were more robust.

The best examples produced by Bow would have been work made with a soft smooth white glaze, such as that of the Shepherd and Shepherdess porcelain sculpture.

The Bow porcelain factory experienced its most active period between 1747 and 1764 with the production of porcelain at Bow reaching a peak in 1758. Objects were modelled on Meissen and Chelsea porcelain sculptures. Around 1750 Bow mini sculptures were manufactured using the new technique of transfer printing developed in Battersea, where transfer prints were applied to small enamel objects such as snuff boxes and patch boxes.

The factory closed in 1776 probably because the company did not move with the times and failed to take up the latest Louis XVI style, which had superseded the Rococo style.

Whilst it was in operation, the Bow factory did not receive any royal patronage and relied to a large extent on financial support. The factory was purely a commercial concern dependent on seeking out viable markets for its products. As most of the twenty or so porcelain factories established in England in the eighteenth century were commercial concerns, many were unable to meet the high costs of production and sustain the viable employment of highly skilled sculptors. Not many of these porcelain factories survived into the nineteenth century.