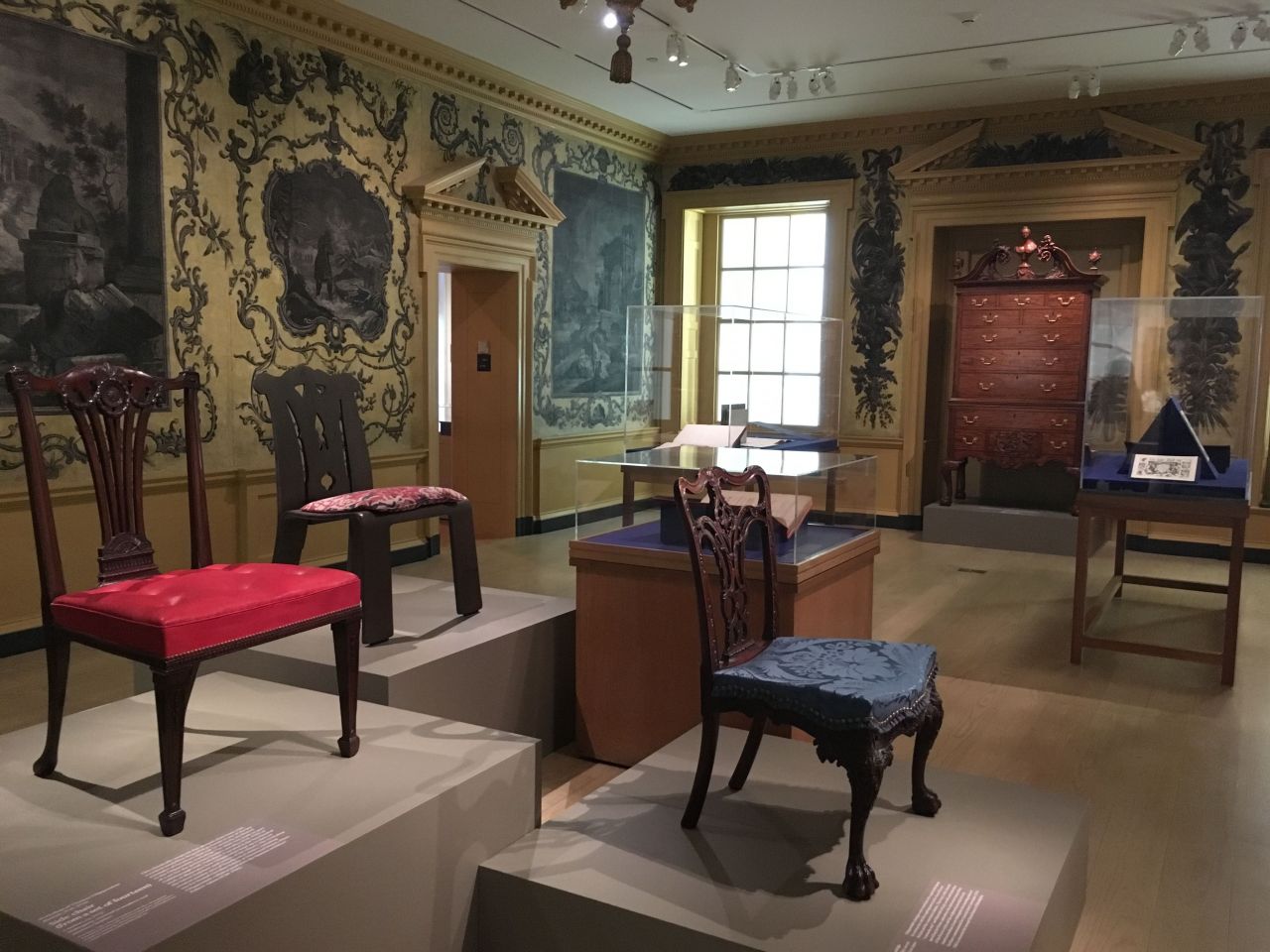 The year 2018 was the 300th anniversary of the birth of renowned English furniture maker and designer Thomas Chippendale (1718-1779).

Yorkshire-born cabinetmaker and designer Thomas Chippendale (1718-1779) is celebrated as ‘the Shakespeare of British furniture’ and his iconic designs epitomise fine-furniture making. His name is synonymous with elaborate, intricately carved mahogany: an English mid eighteenth-century reinterpretation of the French Rococo style. However, it was his book of furniture designs first published in 1754 - rather than his furniture - that secured his fame. Chippendale’s The Gentleman and Cabinet-Maker’s Director containing ‘the most Elegant and Useful Designs for Household Furniture in the Gothic, Chinese and Modern Tastes’, was revolutionary.

The first edition of the Director was a marketing coup. It promoted the firm’s brand, directed fashionable taste for the nobility and gentry, and inspired new interior design trends. The volume was funded by subscribers, although the majority of pre-publication orders were from rival furniture makers eager to access the latest designs and imitate them. Within just a few years of the release of Chippendale’s innovative volume, his designs (and those of his copyists) influenced the developing aesthetics of eighteenth-century furniture in the United States, particularly in Philadelphia.

The far-ranging influence of Chippendale’s publication was explored at The Met Fifth Avenue | The Metropolitan Museum of Art in the exhibition, Chippendale’s Director: The Designs and Legacy of a Furniture Maker (14 May 2018 – 27 January 2019). The exhibition featured a selection of antecedents and derivations of the Director, and a number of pieces of American and British furniture inspired by Chippendale’s designs and aesthetic. Part of the exhibition was displayed in one of The Met’s period rooms, which features wallpaper and woodwork originally from the Great Hall of the Anglo-Palladian Van Rensselaer manor house, built in the 1760s in Albany, New York. The grisaille wallpaper in the room was hand-painted in London and mimics a British interpretation of the French Rococo style. The wallpaper therefore expressed the same design transition as Chippendale’s furniture: French design themes, reinterpreted in London, which were then translated into American interiors.

The centrepiece of The Met exhibition was a selection of original drawings made in Chippendale’s workshop. Of the 228 drawings now in the care of The Met, nearly 200 of these images appeared in engravings in the Director. The acquisition of the drawings by The Met is now legendary. In a classic ‘museological find’, William M. Ivins (then Curator of the Department of Prints) purchased the two mis-identified albums of drawings at auction in New York on a ‘day off’ in 1920. The albums bore the bookplate of Thomas Henry, fourth Baron Foley (1808-1869) and had been sold as part of the library of Ruxley Lodge, Surrey in 1919. Ivins identified that the albums contained not merely the ‘Chippendale designs’ that were described in the auction catalogue, they were actually the final, finished drawings that had been engraved for Chippendale’s Director.

A number of drawings from The Met’s Chippendale albums were specially dis-bound for this exhibition. Observing them framed and glazed en masse and at close quarters was a unique experience. Comparing the drawings and the completed Director plates ‘side-by-side’ highlighted the skill of their engraver Matthias Darly (circa 1720-1780). Darly and Chippendale had briefly shared business premises on Northumberland Court, The Strand, London. This was an ideal address for an ambitious and entrepreneurial business partnership. Their neighbours were taste-makers the Earl and Lady Northumberland (created Duke and Duchess in 1766) of Northumberland House, who patronised fashionable eighteenth-century designers such as Robert Adam and Lancelot ‘Capability’ Brown.

The Met exhibition drew on key objects from its own extensive collection of books and prints of furniture designs. Eighteenth[1]century publications on display demonstrated the rapid commercialisation and development of the furniture trade in England and the dissemination of the resulting aesthetic ideas throughout the British Empire. Some canny competitors immediately followed Chippendale’s Director format almost exactly. For example, the ambitious volume serialised in 1759 by William Ince (1737-1804) and John Mayhew (1736-1804), mimicked the size and the number of plates in the Director, as well as the designs contained within. In what was no doubt a sore-point for Chippendale, Mayhew and Ince also engaged the talented Matthew Darly to engrave the plates. Their pre-publication publicity alluded to Chippendale (‘the very ingenious artificer’), which in hindsight was an inspired choice. Mayhew and Ince’s partnership went on to become one of the most significant and longest-lived London furniture manufacturers of the eighteenth century.

One of the most fascinating items on display at The Met contained no Chippendale designs at all. It was a self-assembled scrapbook of furniture designs created c.1763-1768 by London carver Gideon Saint (1729-1799). Cut-out tabs in the scrapbook provided quick access to different design categories. It included Saint’s own drawings as well as English Rococo ornament prints from other designers, and therefore illustrated the diverse but thematically related array of prints available by the 1760s. The scrapbook would have been a useful workshop tool to share with clients, or to provide new inspiration for commissions. Gideon Saint’s trade card was adhered inside the scrapbook, and clearly represents his own specialisation. Trade cards had dual roles as promotional and utilitarian objects, and evidence of their practical use for customer billing could be seen on the versos of several of the cards on display.

The pages of the Director quickly inspired a new stylistic direction for the influx of British craftsmen who were working in the USA by the middle 1700s. To meet the aesthetic requirements of the rising American mercantile classes, savvy furniture makers drew on the latest trends from London, but reinterpreted them to meet local needs. The Director was particularly influential in Philadelphia, but not necessarily copied exactly. Elements of Director designs were reworked in new combinations. For example, a Philadelphia-made mahogany chest on chest (circa 1762-1765), was inspired by two printed sources. The scrolled pediment — featuring a figural bust — is reminiscent of a Chippendale design featured in the Director. The carved swan and serpent decoration on the lower drawer resembles a design for a chimney-piece featured in A New Book of Ornaments (published in London in 1762 by Thomas Johnson). Although initially drawing stylistic derivations from British and European designers such as Chippendale, American furniture makers continued to develop their own unique regional styles.

Furniture aficionados who missed the Chippendale exhibition at The Met can view the original Director drawings in the Study Room of the Drawings and Prints Department (by prior appointment). The development of American furniture and fine and decorative art can also be viewed in the excellent permanent displays and period rooms in the American Wing at The Met Fifth Avenue, which also houses the fascinating Henry R. Luce Centre for the Study of American Art. This ‘visible storage’ facility features floor-to-ceiling glass cases which allow public access to a visual history of American furniture and decorative arts from the mid-1600s, to the inspiration of Chippendale in the 1700s, and beyond.

above |  Exhibition installation during CHIPPENDALE’S DIRECTOR: The Designs and Legacy of a Furniture Maker (14 May 2018 – 27 January 2019) at The Met Fifth Avenue (Photo: author).