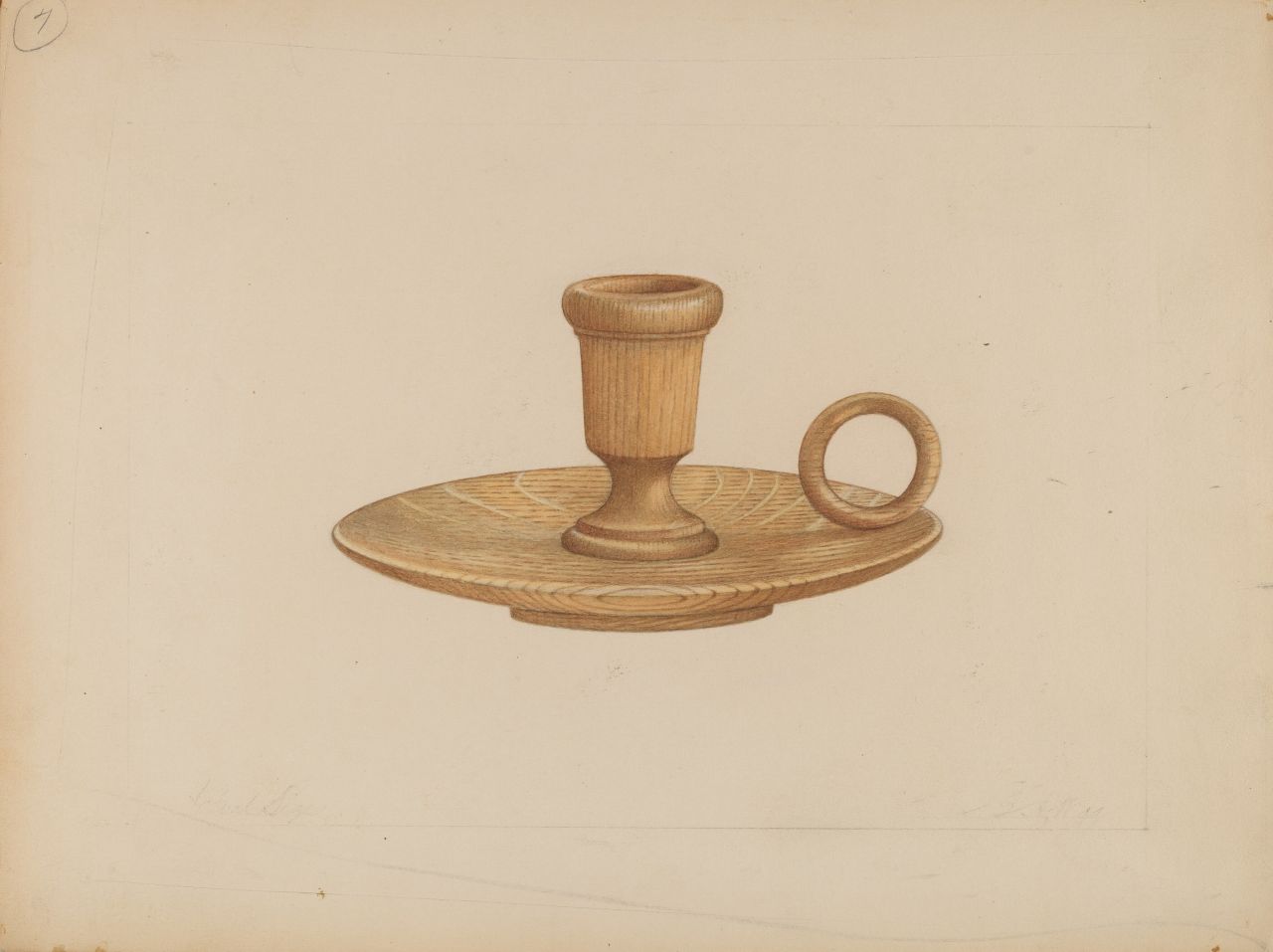 Early candle fittings were the candle beam and consisted of horizontal cross timber beams in which the candle would sit.

In the wealthy homes, light intensifiers such as silvered metal reflectors cut into the shape of a leaf that stood behind the candle socket were used. Later mirrors would reflect this light. Popular in the poorer homes were ideas such as a glass bowl filled with water positioned just behind the candle, which accentuated the light produced. This trick was used especially by lace makers. Pendant fittings with one or two candle sockets were regarded as the yeoman’s chandelier, along with portable table and floor standing candle fittings that could be moved close to where the light was required. Iron wall fittings were used to light cellars and work areas. In moderately affluent homes candle fittings were made of pewter and although not as durable as iron, were much cheaper than brass.

Chambersticks with a carrying handle, contained a candle socket, a snuffer and a dousing cone to extinguish the flame and enabled the candle to be taken to the bedroom. However, tallow candles were never placed above shoulder height such as in chandeliers because of the difficulty in lowering them to trim the wick. Most socialising took place in daylight hours and only on rare occasions would a lavish display of lighting be required. The smell of tallow was not desirable so at more lavish functions, light was provided by the more expensive beeswax candles and from the fire hearth.

Early candles were made from tallow or animal fats. There was competition for these animal fats especially from the soap industry, so although Britain had an abundance of sheep, cattle and pigs from which to satisfy demand for tallow, large quantities of it had to be imported from Russia and the Baltic countries in the 16th century and in the 19th century from Australia.

The making of tallow candles was first mentioned as a craft in England in 1283. A chandler was a maker and dealer of candles and in 1462 the tallow chandlers were granted a Royal Charter by King Edward IV enabling them to maintain quality assurance and regulate their price. In 1709 a tax was imposed on all English and imported candles. In 1711, 31.4 million lbs of tallow candles were taxed and by 1830 the amount had increased to 109.4 million lbs. This unpopular tax was not repealed until 1831 which meant tallow candles then became the main means of lighting for the poor.

Candles were made by hand, either by repeatedly hand dipping a wick of peeled rush into melted fat or by pouring liquid fat into iron or pewter moulds. This resulted in more uniform size of candles suitable for a candle holder. Tallow had a lower melting point compared to beeswax so a thick wick was vital to produce a good light. Wicks were made from twisted cotton, hemp or flax. The secret to a good flame was to keep trimming the charred wick with a scissor snuffer. These were expensive so were a prized possession in the household that could afford them. By 1820 plaited wicks were more serviceable as the wick bent into the flame and was fully consumed. With the Industrial revolution, candle making and ingredients used to make them were refined to such an extent that the animal fat smell was markedly reduced and even the wealthy, when not entertaining, used them to supplement lighting. Being made of animal fat however, care had to be taken to keep the candles away from vermin so were stored in timber, brass or iron boxes.