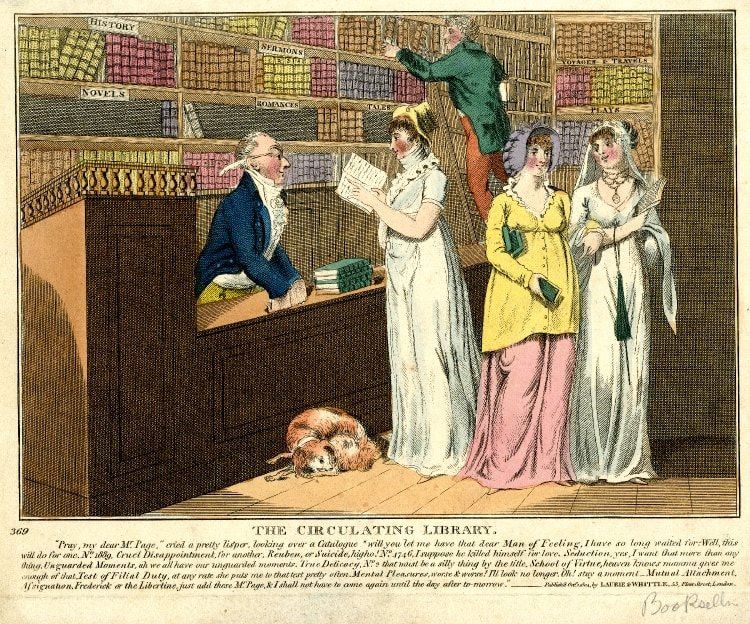 For us borrowing a book simply involves a free visit to the local library but in the 18th century there was only one major public library, Chetham’s in Manchester.

Subscription libraries had been created for the benefit of users, charging high annual fees or requiring members to purchase shares. They were often established in local communities by subscribers who wished to establish a permanent collection of books and reading material, usually of scholarly material, which was kept at the home of one member. The Alton Book Society, to which Jane Austen belonged, had an annual subscription of one guinea and by 1811 had over 200 books, mainly theology and travel, kept at the home of a Mr. Pinoch.

The increasing demand for books, especially novels, brought into being the Commercial Circulating Libraries which operated for profit and began with booksellers renting out copies of new titles in mid-18th century, serving the reading interests of the middle class. Allan Ramsay opened the first Circulating Library in Edinburgh in 1725, Samuel Francourt proposed opening one in London in 1742 and by 1801 there were over 1,000 in England alone. Many were owned by publishers, such as John Lane of Minerva Press which operated as both publisher and library from 1770 to 1848 and advertised having 20,000 books. These publishers were more likely to publish fiction by female writers such as Fanny Burney and Ann Radcliff as well as the extremely popular Gothic novels, providing consumers, particularly women, with reasonably cheap access to the latest books. By 1800 most copies of a novel’s edition were sold to libraries, leading Jane Austen to be concerned on the publication of Mansfield Park that “people are more ready to borrow and praise than to buy – which I cannot wonder at.”

Commercial Circulating Libraries also charged a subscription, from eight shillings to one guinea annually. The Royal Colonade Library in Brighton charged £1.6.0 for which its patrons could borrow from nearly 8,000 volumes, advertising that its Reading Room was frequented by Gentlemen and Ladies and was supplied with both French and English journals. Circulating Libraries were associated with leisure, larger ones stressed the attractions of their establishment or the beautiful interior where fashionable ladies could meet (and gossip!!): whilst smaller ones often shared premises with other goods such as drapery or stationery.

Libraries were established in wealthy resorts where the subscription list could be used to check which visitors of note had arrived in town, as in Jane Austen’s Sanditon. Many of the books that Jane read were borrowed from the library in Bath, which advertised on the opening of its premises in 1801 to benefit residents and visitors with a “collection of books not to be seen elsewhere!” Libraries were also found in small towns such as Basingstoke where Jane was a subscriber at Mrs Martin’s where the inducement to subscribe was that “it contained not only novels but every kind of literature”.

Novels were a relatively new genre of literature and came with a poor reputation, an inferior form of writing, which could have harmful effects on the young female mind! Many writers were wary of using the word ‘novel’ in the title - Fanny Burney’s Cecilia was subtitled “memoirs of an heiress’ whilst some female writers used “anonymous’ or ‘a young lady’ to conceal their identity. Despite this, novels flourished with popular authors such as Maria Edgeworth, Samuel Richardson and Jane Austen herself and as circulating libraries reflected that public demand, they flourished throughout the 19th century.

Above | John Buonarotti Papworth ‘The Library’ from Poetical Sketches of Scarborough in 1813: Illustrated by Twenty-one Plates of Humorous Subjects, reprint publisher, Frank Fawcett, 1893