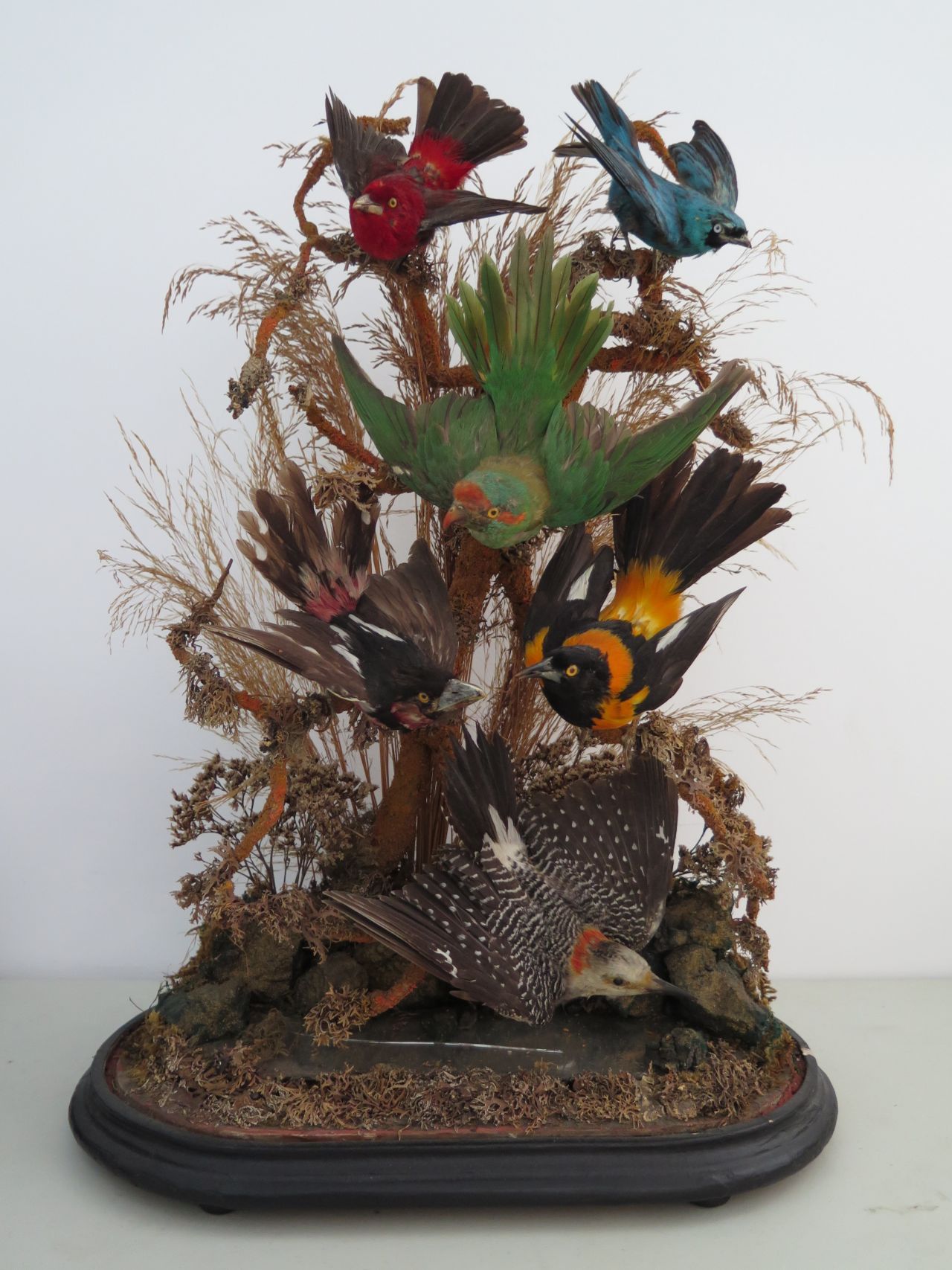 Preserved birds under glass conjures up an image of the Victorian parlour. A room bursting at the seams with overstuffed furniture, knick-knacks and a kaleidoscope of patterns, all jostling for attention.

Victoriana is easily dismissed, but by taking time to uncover the history behind the popular decorative glass dome, a fascinating story emerges of Victorian social values, taxidermy and the study of natural history. The mid-17th to late 18th century was described as the Age of Enlightenment, when free scientific enquiry was encouraged. Britain was building her colonial empire and increasing trade with exotic lands. Traders were bringing birds, animals and plants back for British collectors and the study of natural history flourished. The quest for successfully preserving specimens for study became essential.

By the second half of the 19th century, new techniques in the art of taxidermy were exhibited to great acclaim at The Great Exhibition, held at the Crystal Palace in London in 1851. Natural history societies sprang up throughout Britain and the late 19th century ushered in a golden age of scientific and decorative taxidermy.

Hunting trophies and scientific specimens mostly remained a man’s interest. However, it was the Victorian woman who elevated taxidermy to an art form. A woman’s role was to create a beautiful home. An interest in nature was deemed a moral pursuit. Ambling in the countryside looking for shells, plants and feathers for craftwork allowed women a degree of freedom from the confines of the house. Inspired by the milliner’s trade, a popular use of feathers was to wire them together to create flowers and elaborate bouquets. By the 1860’s as well as plumes of feathers, milliners were adding entire stuffed birds to their creations.

A display of birds under glass would have appealed to the Victorian woman’s love of nature and decorative ornamentation. Displayed in the parlour, it would have been instructive to her children, and an interesting talking point for guests. The 19th century glass dome in The Johnston Collection shows an artful display of brilliantly coloured tropical birds, arranged in a natural setting amongst grasses and foliage. The birds are posed in full flight, showcasing their plumage to great advantage.

The taxidermy of birds was particularly difficult. Good examples are rare before the 19th century, as most specimens succumbed to mould and insect infestation. Preserving the skin was not successful until arsenic soap was introduced to England from France in the 19th century. The soap was applied to the inside of the skin which was then stretched over a modelled straw body. The feet and wings were wired into place and glass eyes attached. Most feathered specimens were placed under glass to prevent any infestation. The dome was a much more elegant option than the traditional box and allowed in more light. The repeal of the glass tax in 1845, meant glass domes of all shapes and sizes were readily available and affordable to the middle classes.