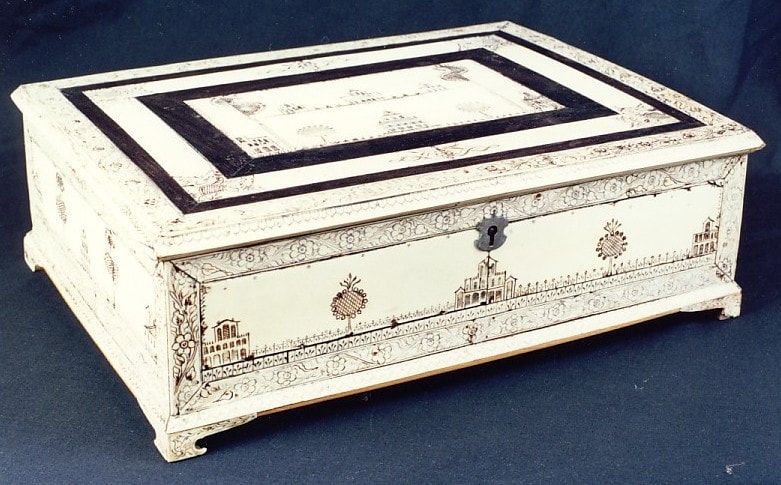 This delightful Vizagapatam box is comprised of sandalwood, veneered with elephant ivory and highlighted with lac and is dated to being made around 1840-1845.

Vizagapatam refers to the ivory-laid and veneered items produced in the Indian city of the same name, in the 18th and 19th centuries, during the heady days of Company rule and the British Raj that proceeded. Specialities included small wooden items like writing, sewing and games boxes and tea caddies. A British officer stationed there in 1806 stated, the locals “are very expert in their ivory works, imitating with some success the Chinese in making curious little boxes and work-baskets of ivory and bone, which are bought by the Europeans to take home as presents” – a phenomenon somewhat like some Aussie tourists bringing home a Buddha statue from Bali, or a leaning Tower of Pisa paperweight to give to their family and friends to make them jealous of all their exotic overseas travels.

To some the architectural motifs may conjure the visual splendour of Indian Mogul court architecture and paintings. This volunteer guide informs his tour groups that the shimmering black and white surfaces reminds him of the pristine white surfaces of the Taj Mahal, to which he often receives nods of agreement. However, after more dutiful research these buildings are more often inspired by European engravings, which were widely known to Vizagapatam cabinet-makers. Amin Jaffer, a pre-eminent scholar on British-Indian furniture design, states architectural scenes from engravings were mixed and matched so fantastical scenes developed loosely inspired by all manner of building styles. On our box this includes the most charming multi-storey houses and picket fence scenes.

Note the box’s four bracket feet – a thoroughly English 18th century furniture design motif. However, each miniature leg contains stylised Hindu makara – a mythical beast, resembling a dolphin or crocodile, sometimes depicted with an elephant-like trunk and bird’s tail. Conversely, they are more reminiscent of the hippocampus seahorses on the Collection’s convex regency mirror, (A1017-1989) suggesting a more European influence. I will leave you to be the judge on your next house tour when you encounter this object.

The box was manufactured in one of the Vizagapatam workshops existing in the town in the 19th century by a team rather than one individual – think a quattrocento workshop producing triptych altarpieces or a 19th century Staffordshire potteries production line. One group would be responsible for sanding the sheets of sandalwood, another marking and cutting out dovetails with separate joiners later assembling the box. Others again cut the ivory into panels and strips, which were mounted onto the box using a mastic substance (animal glue coloured black).

The ivory-mounted box and unmounted strips of ivory was then passed on to yet another group of craftsmen, who illuminated the designs with an application of black lac. Ivory is an extremely dense material with a clear texture and can be carved, engraved, turned, pierced and painted, and is sufficiently strong and elastic to be used as a veneer in furniture production.

Thurston’s account of the trade, in 1901, accounts the lac recipe comprised of red wax (lac) mixed with lampblack, i.e., soot from an oil lamp. The lac was rubbed into the incised patterns and the excess scrapped off. Once dry any loose strips are glued or pegged to boxes, which are polished, sanded and mounted with hardware.

The skill of the Vizagapatam craftsman is evident with tiny ivory pegs resembling dainty little nail-heads invisible to the naked eye until you take a closer look at the surface of the ivory veneer sheets. Prior to assembly the loose strips and boxes were passed onto an engraver, who incised the designs on the strips of veneer. Amazingly, the artisans did this without a template, as they would have learnt the design by rote as youngsters.

The interior of the box retains its five original divisions – two are square and three rectangular. Two hinged doors, complete with miniature circular bronze handles, hide the left and right rectangular side components that would have once hidden the contents (now empty). An escutcheon plate resembling a medieval knight’s shield conceals the object’s functioning key lock mechanism. The box is empty except for the remnant pieces of a late Victorian domino set. What are they doing there? Perhaps Johnston had the dominoes stashed away for his bored houseguests on a dreary weekend afternoon at Chandpara when it was too cold to lounge around the swimming pool – or another purchase from some previous owner of Vizagapatam ware – the possibilities are endless.

Although Indian patronage of Vizagapatam artists by local Maharajahs, Nawabs and Rajas occurred, including European style ivory-laid chairs and traditional objects like handles for fly-whisks, and statues of Hindu deities to adorn their palaces - even Vizagapatam ivory veneered palanquins to get around in! Given that the trade was geared towards exporting furniture to foreign markets, it is unsurprising that the world’s largest and choicest collection of Vizagapatam wares now resides within the hallowed exhibition halls of the Victoria and Albert Museum in London.

Unlike in Africa, Indian elephants were seldom killed for their ivory but domesticated and fascinatingly their ivory was shorn. The owner of one Vizagapatam bureau table maintains the inlaid ivory came from a Raja’s own elephants whose tusks were periodically shorn and given to carvers to work. In most cases these items have now been sold, perhaps to the likes of entrepreneurial antique dealers such as Johnston who knew a bargain when they saw one.

Seen our Vizagapatam box but want to sample other forms and products? Do not fret you do not have to travel to England or the tropics of South East India. There are many choice pieces to ogle in other Australian public institutions. Vizagapatam card cases often feature on the antique market and occasionally more spectacular, rarer pieces if one has the means or leisure time available to hunt these pieces down - just do not purchase any ivory product created after 1947 as it is against Australian law.

The National Gallery of Victoria’s recently conserved Vizagapatam sewing-box is on show in the Asian permanent galleries. The lid is displayed open so you can admire the gracefully intricate ivory veneers inlay work and sewing accessories. There is the Vizagapatam glove box in the Melbourne Museum holdings – currently in storage but can be glimpsed in all its digital glory on Museum Victoria’s Collections Online. This piece caught the attention of judges at ‘Marvellous’ Melbourne’s 1880 International Colonial Exhibition where it featured alongside other sumptuous goods at the Indian Court. The exhibitor was awarded a prize for its craftsmanship.

A trip to The Art Gallery of South Australia may be in order. In 2015 the city of churches leading art institution was gifted an exquisite Vizagapatam ivory inlaid rosewood writing box dating to 1720-1740. Here the elephant ivory is painstakingly inlayed into the rosewood exterior, as opposed to veneer sheets affixed with ivory pegs. The writing box incorporates a patriotic Union Jack and greyhound chasing a game deer, undoubtedly appealing to the 18th century British middle to upper class male consumers it was made and marketed to.