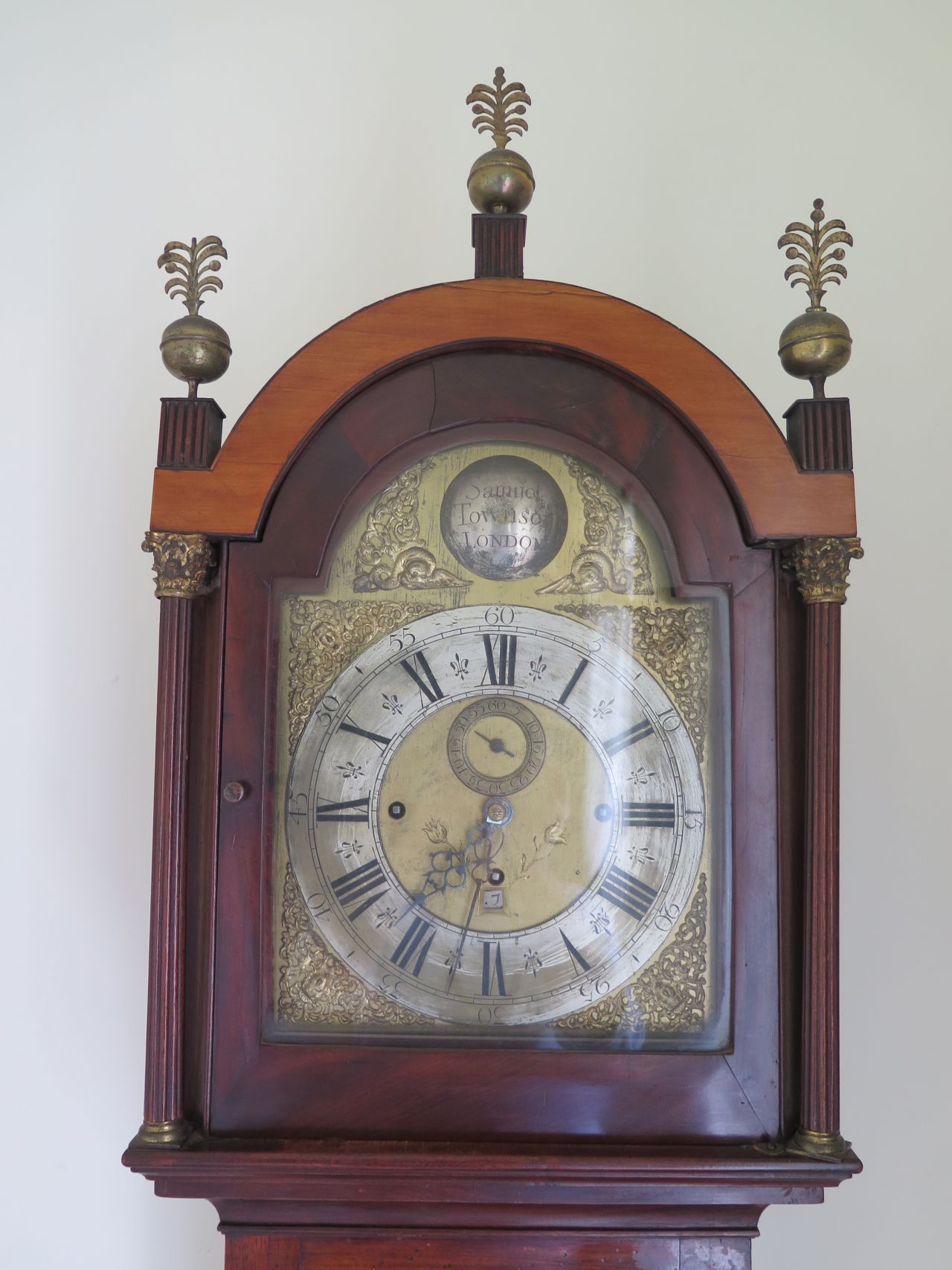 When preparing for the William Johnston’s Emporium tour arranged by Hecker Guthrie, I came across some confusing information in the Catalogue entry for the Mahogany longcase clock attributed to Samuel Townson in 1790.

The extract from The Johnston Collection catalogue reads:

Townson was apprenticed in 1695 and became free of the Clockmakers Company in 1702.

According to this extract, if Samuel Townson had been apprenticed in his teens, he would have been over 100 years old when the clock was made.

Having noticed this contradiction, I began to search for more information. I was able to confirm that Samuel Townson was born the son of Robert Townson on 29 March 1672 and started his apprenticeship on 1 May 1695. He was “freed” on 5 May 1702 and his active years “fl” were 1702 until 1738. I was not able to determine his date of death at this stage.

I contacted Brian Loomes, who is mentioned in the extract, for further information as he is a professional specialist dealer in British antique clocks. Imagine my delight when I received an immediate response. Loomes asked for more photographs to help him identify the clock. We obliged and sent extra photographs, particularly of the dial. He was then able to give me quite a lot of information about Samuel Townson and, together with information from the references below, I was able to piece together Townson’s genealogy.

Samuel Townson would have been 23 years old when he was apprenticed to Thomas Wheeler on 1 May 1695. This was unusual as at that time the normal commencement age for apprentices was 14. Townson was married to Sarah Wheeler, daughter of his Master, Thomas Wheeler, on 14 May 1695 at St James Duke’s Place, London. Wheeler had taken on Samuel as his third apprentice less than a fortnight before his marriage. Loomes suggests “Sarah was pregnant and her father took Townson on as apprentice to give the couple and forthcoming baby a roof over their heads.” There does not seem to be any evidence of the baptism of a child of Samuel and Sarah. The Clockmakers’ Company would only allow a clockmaker to engage two apprentices at any one time. Wheeler had been Master of the Clockmakers’ Company in 1684 and may have been able to overlook taking on an extra apprentice.

When his seven-year term of apprenticeship was over, Townson gained his Freedom of the Clockmakers’ Company by redemption in 1702. Usually, apprentices were automatically entitled to freedom with a token payment. However, he was probably made to buy his freedom because he married during his apprenticeship. Townson took on three apprentices himself: Daniel Wood in 1707, Benjamin Rider in 1731 and Edmund Pottercary in 1738. Apparently, he was married a second time to Martha Fellowes in 1706. There is also a record of a Samuel Townson being interred in a non-conformist burial ground on 8 October 1758. A “non-conformist” belonged to a religion that did not conform to the Church of England, the state religion.

With regard to the longcase clock in The Johnston Collection attributed to Samuel Townson, Loomes notes that “the mahogany case with Sheraton style inlays is provincial, not London made” maybe dating from 1790 to 1800 and not connected to Samuel Townson. The case “lacks its upper cresting which would have been in the form of shaped or fretted pieces fitting between the upright wooden blocks that carry the finials. The woodwork was stained to match the seat-board colour to that of the case interior.”

The dial is thought to be by Townson and possibly dates from 1730 as may the three-train movement, which could be original. Loomes suggests the movement may not be original to the dial. It looks like the dial feet could have been removed to fit the movement as evidenced by the empty holes at the back of the dial. A clockmaker would need to examine the movement closely to confirm this. Loomes thinks the hour hand and possibly the minute hand are over-length and of a later date. He suggests a clockmaker also examine the back of the movement to confirm whether the hour strike on a gong is a later alteration from striking on a bell.

In conclusion, whilst the dial is attributed to Samuel Townson, the clock has been cobbled together and placed in a case of a later date, which often happened with the making of longcase clocks in the 18th century.

This article was originally published in Fairhall, issue 19, November 2016, pp 13.