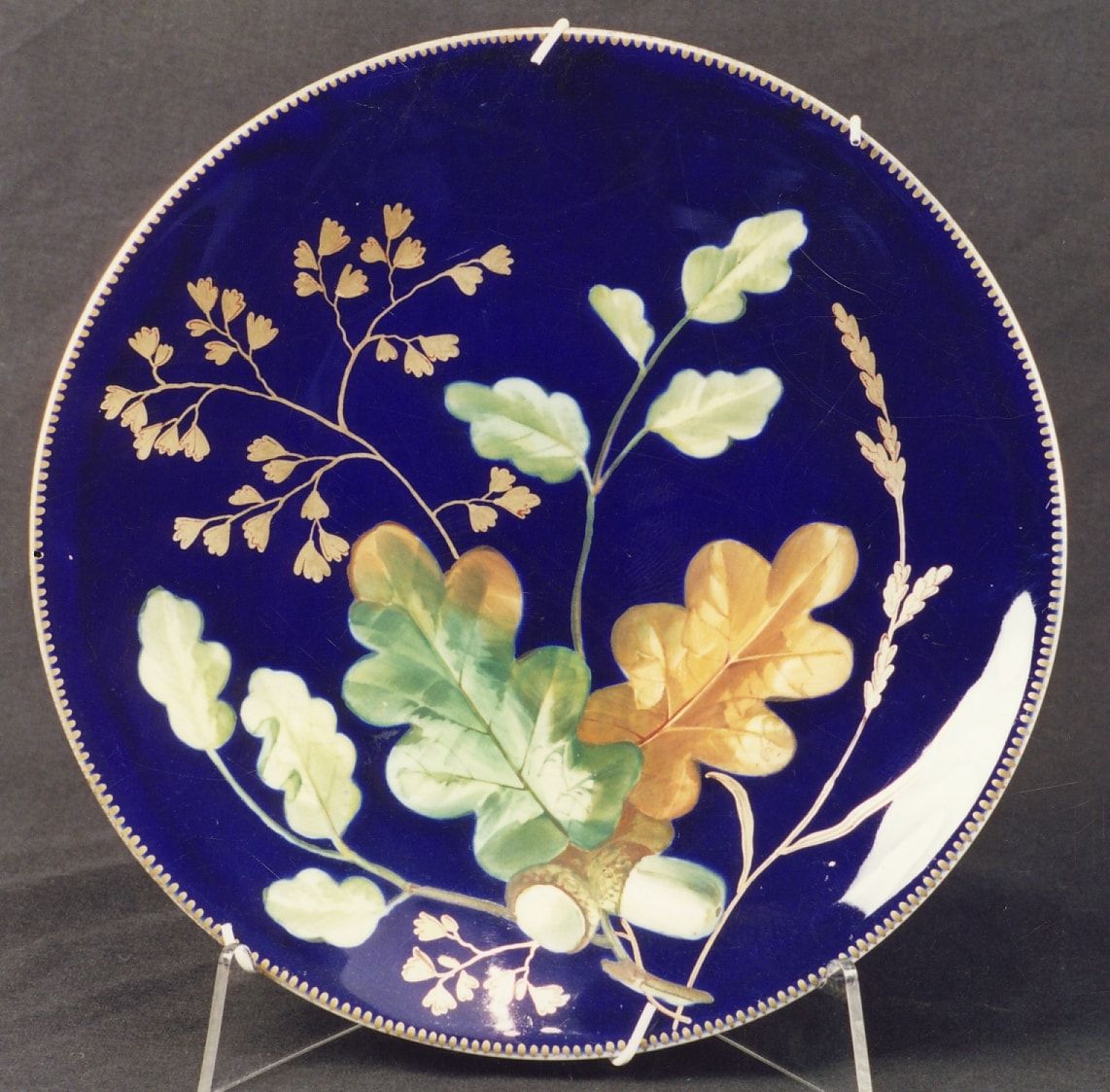 Longton, a district just southeast of Stoke-on-Trent, Staffordshire, has been a centre of pottery manufacture for more than 300 years.

It has seen many firms rise and fall in the scramble for innovation, financial stability and market share. During the last half of the 19th Century alone over 250 firms were registered as working (often for only brief periods) in the 70 or so factories that were operating there before the area began to decline in importance early in the next Century.

The items produced by these factories ranged from humble kitchen and bathroom earthenware to the most elegantly designed and beautifully decorated porcelain or bone china. Here we will focus on two firms that typify the Longton story, both of which are known to have exported to Australia in the late 19th Century.

The Bridgwood family was a prominent member of the Longton business community for over 100 years. After a modest start S. Bridgwood & Co took over the Anchor Pottery in the mid-1850s, producing bone china tea sets, dessert services, dinnerware, vases and other decorative items for the domestic market but also for export to America and Australia. One of the products was described as “porcelain opaque” or “Parisian granite” and was marked “PG” or “Limoges”, presumably to give it some appeal to the more sophisticated members of society. Bridgwood china is a little easier to identify than most because of these and other marks.

Bridgwood shapes lacked the simplicity of the neo-classical but tapped into the neo-rococo and Victorian taste. For example, tableware often featured very ornate handles, rose finials, duck’s head spouts, thumb rests and multiple feet on teapots. Although the products lack the delicacy of form and exquisite painting found in earlier porcelain, Bridgwood items have a lasting appeal and are representative of the late-Victorian era.

Another Longton firm which exported to Australia was Harvey Adams & Co. From its inception in 1862 the factory produced fine china and earthenware ranging from practical items for bathroom use to vases, jugs, tea and dinner sets, trinkets and other ornamental and decorative objects. Writers have described Harvey Adams’ bone china as remarkably high quality with an excellent glaze. Finely enamelled, gilded and jewelled tea and dessert services were a feature of this time.

Harvey Adams & Co was fortunate in having a succession of art directors who were able to capture the interest of buyers at home and abroad. Several artists were prominent during the firm’s period of prosperity, among them Henry Mitchell who won awards in Paris and Vienna and whose work was remarkable for its finish, modelling, delicacy and purity of colour. The firm manufactured vases, jardinières and other containers in several shapes with floral decoration aimed at being as true to nature as possible. On the other hand, some designs were in the Chinese, Japanese or Persian style in order to give the firm’s output a wide appeal.

The firm is believed to have introduced the quirky “moustache cup” as a response to the male fashion of the times. Another example of this innovative approach was to introduce silver decoration as a ground or to provide a three-dimensional effect to some of its products. The leaves in botanical designs were often embossed for the same purpose. Flowers painted on a silver ground and with a silver edge were a Harvey Adams “special”. Other ideas included the popular shamrock decoration and the primrose designs on breakfast and dessert sets. Gold in both matte and burnished form was also often used to heighten the decoration.

The Johnston Collection is home to a bone china cabinet plate (A0501-1989) attributed to Harvey Adams & Co. It features a deep cobalt blue ground with hand-painted gingko leaves, oak leaves and acorns in autumn tones; it has a delicate, gilded dentil border. A painted twig also bears the monogram “TS” and it is tempting to speculate that this indicates the painter was the celebrated “Mr Slater” who was art director before leaving the firm in 1881. He was described as “a high-class character” who produced exquisitely-coloured items.

Much of the above information on both Harvey Adams & Co and Bridgwood & Son has been taken from Llewellynn Jewitt’s Ceramic Art of Great Britain, 1800-1900 (Barrie & Jenkins, London, 1972). Bridgwood marks are shown in Geoffrey Godden’s Handbook of British Porcelain and Pottery Marks (Herbert Jenkins, London, 1968) and some Bridgwood teapots are illustrated in Michael Berthoud & Richard Maskell’s Directory of British Teapots (Micawber Publications, Bridgnorth, Shropshire. 1988).

This article was originally published in fairhall, issue 27, July 2019, pp 9.