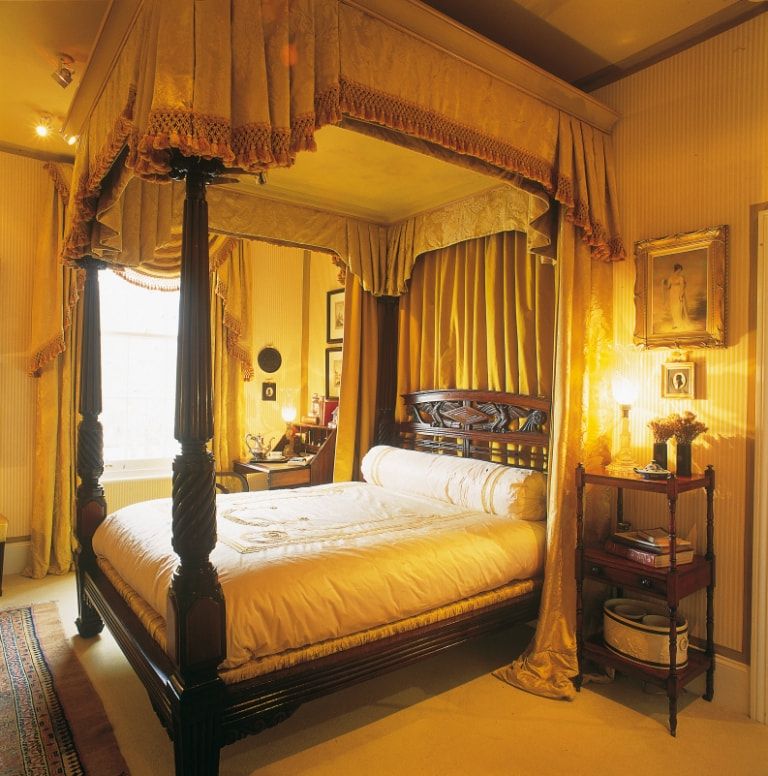 After William Johnston’s death in Pune in India in 1986, he left behind a complicated legacy and a private estate to be promptly converted into a public museum. Johnston departed without articulating the lasting significance of his collection, and its irregular and peculiar contents.

From photographs taken soon after Johnston died, Fairhall’s large Drawing Room, as it was called, was a cacophonous mix of effects part commercial stock, part personal things that, even so, were at top-of-mind always available-for-sale.

General public knowledge of the antisocial Johnston’s private collection and content had been limited or virtually unknown. The uniqueness of the contents of Johnston’s collection was not fully understood by or yet defined by either the Trustees, consultants, staff, or his friends. Between 1986 and 1990, a considered transition and accumulations of visions allowed more imaginings and assessment of what Johnston’s collection could do.

When the role of Fairhall as a museum was speculated, conservation architect Peter Lovell, estate executor and inaugural Trustee John Rogan, and design consultant David McCabe, presented a series of proposals for the interior treatments of the rooms to the Trustees. On what the stylistic themes might be, John Rogan started with: “We are anxious to ensure that Bill’s style and connoisseurship will be reflected.”

Significant research, interpretation and a rigorously considered and articulated treatment of Fairhall as an exhibition house, its furnishings and interpretation were undertaken. Judith Thomson, inaugural Director between March 1989 and August 1991, also carried out research on the Indian pieces in the Collection.

Three proposals were drawn for the newly renamed Green Drawing Room: one to create a stunning formal reception space as a ‘Library, Drawing & Dining Room’ under the curatorial conceit of “The age of Mahogany”; another as a ‘Durbar Room’, and one as a late period ‘Regency Room’ that informally mixed pieces from England, India and China.

The proposal to recreate a ‘Library, Drawing & Dining Room’, was chosen to be realised when Fairhall finally opened to the public in 1990 (restaged as Being Modern in 2017). This interpretation was, understandably, chosen to be the general stylistically and chronologically driven exhibition of key offerings from Johnston’s domestically-scaled collection in a sizeable reception space.

It was dedicated to the “golden age of English furniture” and in a sense to the Georgian era as a whole to intentionally repurpose and highlight Johnston’s collection, present him as a gentleman collector and reveal a far greater and refined perspective than Johnston’s own illogical gatherings, scatterings and accumulations in his rental, domestic interiors and shop.

The second sketch for the ‘Durbar Room’ was determined by the strength of the unsold Kent Antiques stock of furniture from Government House, Calcutta. The restrained formal reception room look may have initially been seen as somewhat indulgent, perceived too austere and received as intimidating as a first ‘way-in’ to present the Collection to the public.

The ‘Durbar Room’ design certainly does not reflect Johnston’s domestic style and it was important that guiding the thinking was always that “The objective in the presentation of the house will be to maintain the atmosphere created by Mr Johnston and to build on this atmosphere.” So, this proposal remained on paper.

Johnston did not use the Calcutta Suite in any of his properties but it is known that some of the other British-Indian objects were used by him. The four-poster canopy bed (A0036-1989), for instance, was used in the bedroom at Chandpara, his country property near Tylden. However, the ‘Durbar Room’ concept does incorporate a manner in which Johnston used large-scale mirrors and plants in the Front Hall at Chandpara to create a formal and imposing entrance. (see illustration p 10).

As with all three ideas-on-paper, Lovell created a design to layout the Green Drawing Room with objects that were available at the time of selecting the Foundation Collection. The two large-scale mirrors at Chandpara did not make it into the final cut and so the resulting layout is different from what Lovell sketched in 1990.

It is not uncommon to revise and redesign proposals as they are being completed. So, for Another Look, the concept designs had to be revised to make use of items finally retained as part of the Foundation Collection. Perhaps by calling on Johnston’s history of altering interiors to show-off what items he had, there are enough objects to install a room that still reflects the architect’s original intent.

Clearly after the final selection of Foundation Collection objects was made, and surplus objects dispersed, came a change in interpretation so the appearance is different, as is Fairhall itself, which is not ‘original’ Johnston. Considering this, the current look must be viewed as a necessary interpretation of Lovell’s original designs.

The proposal for a ‘Durbar Room’, and now Another Look, is almost entirely comprised of purchases made by William Johnston, as an antique dealer, in India. After exhausting his sources in England Johnston turned his sights and travels to India, especially Pune and Calcutta, which became his favourite places to replenish his shop stock.

Partition of India in 1947 brought an end to the era of British rule, and consequently the abolition of the zemindari system, upon which so much of the landowners’ estates income depended. The zamindar class could no longer afford to maintain their palaces and began selling off their furniture and valuables.

It was reported in The Age of 9 March 1982 that, “[in 1965] Mr Johnston first went to India to value some antiques for the Maharaja of Tagore and to recommend whether they should be sold in India or London … That Tagore visit led Bill Johnston to buy some Indian antiques himself – including two chandeliers – one from the palace of the Maharaja of Tagore and the other from a palace owned by the Maharaja of Cossimbazar. By 1982 he said he still visited India regularly (he says he knows half of the society people in Calcutta) but he no longer goes there to buy. By this time the Indian Government had put a blanket ban on any object older than 60 years leaving the country.”

Returning to Melbourne, Johnston sold “600 lots of antiques from India” through the rooms of Sydney-based auctioneers Geoff K Gray in La Trobe Street in 1965.

Another important contact in India for Johnston was Maharajkumar Somendra Chandra Nandy (Dr S C Nandy, 1928 -) of Cossimbazar Palace (Sripur Palace) in Calcutta. Johnston first met Dr Nandy around 1971 when he went to buy furniture from him and his wife. Dr Nandy may have been the conduit for the purchase of the many items Johnston acquired from the sale of vice-regal furniture from Government House, Calcutta (now known as the Raj Bhavan, Kolkata).

Furnishings were always scant at Government House, Calcutta. An extensive set of furniture, that we now affectionately refer to as the Calcutta Suite (A0835-1989, A0860-1989), was ordered around 1900 by Lord Curzon (1859-1925) from an Indian manufacturer. Lord Curzon was Viceroy and Governor-General of India from 1899 to 1905, and went about restoring and modernising the building, electrified the lights, installed gas, improved the furnishings and filled in gaps in the collection of portraits. The furniture was made to match some existing English-made furniture that was commissioned around 1800 by Richard Wellesley, 1st Marquess Wellesley (1760–1842) who, as Governor-General of India between 1798 and 1805, set the tone of Government House, Calcutta as a symbol of the growth of British power.

The electrified chandelier (A1072-1989), focussing the garden end of the room, exemplifies the sequence of chandeliers in the main reception rooms, like the Yellow Room, of Government House, Calcutta (see illustration below). The chandelier is attributed to F & C Osler (Follett and Clarkson Osler) that was founded by Thomas Osler in Birmingham in 1807. The glassworks soon specialised in glass furniture and chandeliers and became the leading makers of chandeliers and lighting during the 19th century. They established showrooms in London and then Calcutta to supply a burgeoning market.

The ‘Durbar Room’ takes its name from “traditional Indian princely courts, being the title given to the public audience held by an Indian or British colonial ruler, or the hall where such audiences are held.” The Hindi-Urdu word durbar came to be applied to great ceremonial gatherings, the first of which was held in 1877 to celebrate the proclamation of Queen Victoria as the first Empress of India in 1876. It was a gesture to link the monarchy with the empire and bind India more closely to Britain - and a Queen who never visited India in her lifetime. Durbars, however, continued with increased ceremony and grandeur. In 1903, the Coronation Durbar was held in Delhi to celebrate the accession of Edward VII to the British throne and to the title of Emperor of India. This ceremony was presided over by Lord Curzon – who commissioned the suite of furniture that provides the basis of the installation.

By privileging the Calcutta Suite in this look, the ‘Durbar Room’ also provokes thinking around a history of collecting and also to some extent about how to display material and convey a message about how to create a semi-regal space representing an overall impression of “vice-regal-ness” and the possibility of representing all the powers of the Empire, symbols of Home, representing a system of constitutional democratic order.

While the inaugural trustees were concerned about creating a domestic museum setting, the ‘Durbar Room’ concept offered another curatorial objective of displaying the Collection’s most impressive offerings from the Indian subcontinent.

The ‘Durbar Room’ features an antique dealer’s unsold prizes sourced from a rapidly disappearing British Raj in India. It hovers between the idea of an English (and Indian) reception space informed by an official vice-regal palace re-imagined within a moderately sized domestic Victorian home re-imagined as an English Georgian Regency house in mid-20th century Australia that was converted to a boarding house that became a retail space now repurposed as public exhibition house and trophy case containing objects and curiosities collected from a distant subcontinent and remnants of a retail shop by an idiosyncratic mid-20th century anglophile antique dealer, that is now tourist destination, and asks how an early 21st century viewer can consider legacies of collecting and layers of meaning.

Visitors can view the ‘Durbar Room’ as a single art object, or installation, considering the whole display, instead of its discreet items. As a formal staging it performs as a microcosm of an ambitious scheme of empire and the ‘order’ of presentation and reception. The ‘Durbar Room’ offers an imposing idea of an India past, and as an exhibition of unique and singular art objects of considerable provenance.