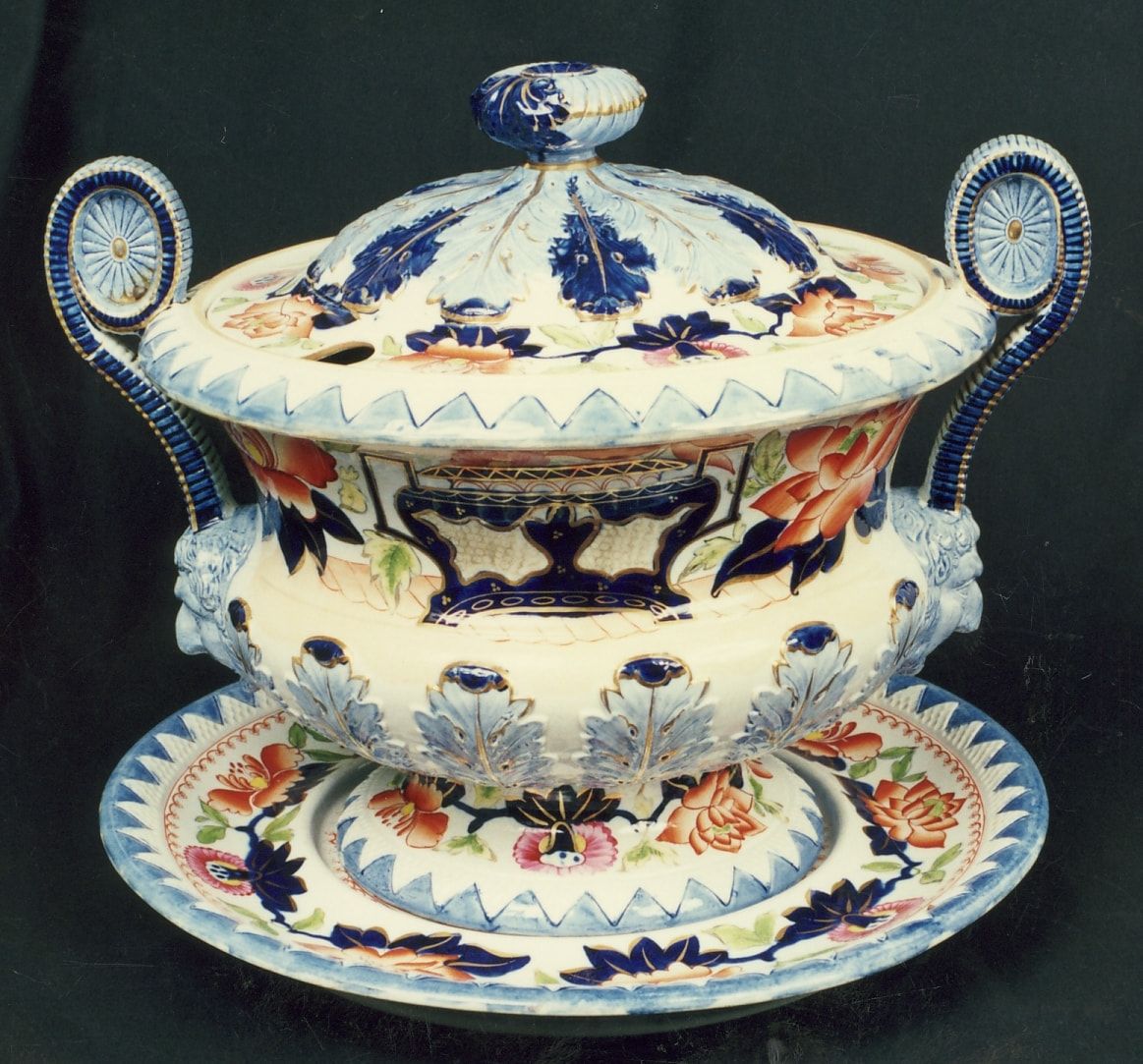 Of the many families who contributed to the phenomenal success of ceramics manufactured in Staffordshire during the late 18th and early 19th Century, few were as well-established as the Meigh family.

Earthenwares made at the historically significant Old Hall Pottery in Hanley by the original Job Meigh, his son Job II and grandson Charles, were notable for their quality and durability. While Charles carried on his grandfather’s work and by the 1850s had been honoured in several ways, Job II struck out on his own, in 1803 forming a partnership with Richard Hicks, who had married Job’s sister Lydia in 1801. Job also married a potter’s daughter – Elizabeth Mellor – in 1805 and each of the attachments could be described as marriages made in heaven.

The Hicks and Meigh partnership began by manufacturing ironstone in a factory known as the Broad Street Works which they rebuilt and modernised in 1815. The enterprise was a successful one and continued to expand, partly because both partners were, by all accounts, good and honourable men who treated their staff reasonably well – in contrast to some other potteries of that time. In 1820 Thomas Johnson, the firm’s marketing agent, joined the partnership.

In 1823 Job Meigh, described as being noted “for his philanthropy and liberality [and] justly regarded as one of the worthies of the district” was awarded a Society of Arts medal for producing porcelain which was entirely free from the deleterious effects of lead glaze. Then in 1833 the Royal Commission investigating working conditions in the potteries described the works as “well conducted; great order and regularity are manifest all through the establishment.” By that time the Hicks, Meigh and Johnson workforce had grown to over six hundred, producing various types of earthenware, “stone china” similar to Mason’s ironstone, and soft-paste porcelain or bone china.

Prominent among the varied production of the factory were porcelain vases with floral designs, hand-painted in enamels, and bone china teawares. The latter ranged from early 19th Century simple shapes with oval or round bodies - such as the elegant Bute shape - to the ornately-decorated items that began to appear as the second Rococo took hold in the 1820s. As the potteries took advantage of the trend among the emerging middle-classes to serve tea in the most stylish way, Hicks and Meigh teapots became more flamboyant and were described as “Empire”, “Pembroke” or “Etruscan”, with intricately-shaped bodies featuring a pedestal, curves or ribbing, elaborate double-looped handles and even spouts representing a duck’s head. Thus, the simple floral or pseudo-Chinese decoration of earlier years gave way to fanciful designs, the elaborate central feature accompanied by intricate borders and much gilding. However, despite what might be described as stylish over-indulgence, the bone china was uniformly of high quality, semi-translucent, white or lightly cream-coloured and serviceable.

In keeping with the creative destruction that was a feature of the Staffordshire potteries as family business expanded, contracted, merged or were absorbed by more successful enterprises, the Hicks, Meigh and Johnson partnership was dissolved in 1835, the Broad Street factory passing into the hands of Ridgway & Co which continued to manufacture ironstone and other wares at the Broad Street works.

Finding a piece of Hicks and Meigh bone china is not for the faint-hearted, as very few items marked with a maker’s name ever appear in public. All known marks are listed in Geoffrey Godden’s Encyclopaedia of British Pottery and Porcelain Marks (Barrie & Jenkins, 1986) and pattern numbers or illustrated pseudo-Chinese marks on some items might be helpful; these can be found by patient prodding of Hicks & Meigh on your search engine. The illustrations to be found online include Bute-shaped cups with a distinctive but discreet “double loop” at the base of the handle and elegant flaring at the lip of some cups. The teapot illustrations may also be helpful but as always beware of similar shapes and decoration by (often better known) competitors. There are few authoritative histories of the pottery, but perhaps the best start is to consult Jewitt’s Ceramic Art of Great Britain 1800-1900 (Barrie & Jenkins, 1972).

This article was originally published in fairhall, issue 24, June 2018, pp 8.