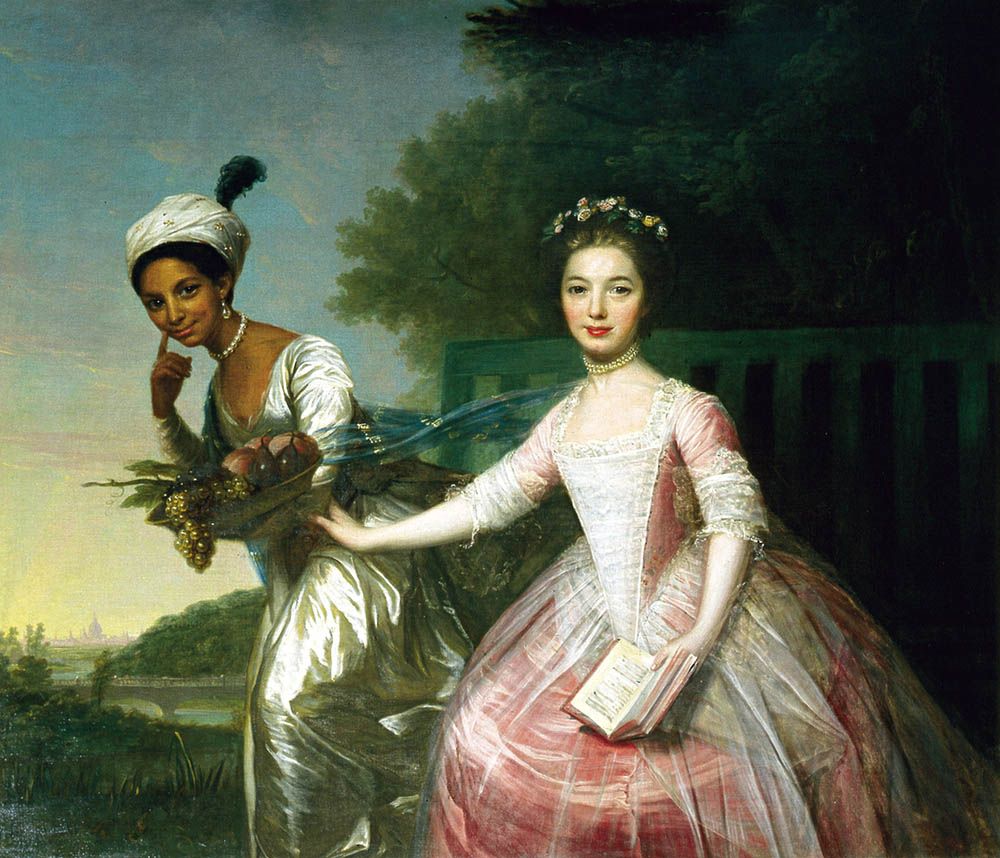 Most people who have visited The Johnston Collection will be familiar with the Venetian console with its blackamoor figures. First produced in the 17th century they became popular again in the 18th century becoming souvenirs of the Grand Tour and finding their way into wealthy English homes, though the term “blackamoors’ long preceded them.

“Blackamoor” as a general term used for people from Africa, is first found in general use in Elizabethan times as by 1600 there were an increasing number of black people in England, some as a result of the slave trade others in the households of Spanish and Portuguese traders. Sir Francis Drake had a black cabin boy on the Golden Hind and black entertainers appeared at the English and Scottish courts. In the burial records of the Church of Christ, London, 1640, is that of a blackamoor maid called Frances “a poor Ethiopian” whilst Samuel Pepys employed a black cook/maid in 1659.

By the 18th century the slave trade had reached its zenith, imperial expansion and the plantation economy brought wealth to many as tea, silk, sugar and slaves became the mainstays of the fashionable London world. As planters returned home with their black servants there was an increasing awareness of the number of black people on the streets many of them servants living and working under a legal system which recognised most of them as property and denied them basic legal rights. A 1729 legal decision (Yates and Talbot) stated “that a slave, by coming from the West Indies with or without his master to Great Britain or Ireland, did not become free. They were not entitled to wages or poor relief should they leave their master’ service because the statutes of the time did not relate to them because they had no legal identity. Enough black slaves were in employment for Matthew Dyer to advertise “silver padlocks for blacks or dogs” in the London Advertiser in 1756.

Perhaps the most noticeable were the negro slave boys, those with the darkest skins being the most valuable and often with classical names such as Cato or Caesar, who featured increasingly from the late 1600’s in the London and country houses of the aristocracy. “Henry Friday’, a black boy, is recorded at Wentworth Woodhouse, Yorkshire in 1770. These pages, wearing elaborate and expensive clothes, silver padlocked collars and feather turbans, attended their mistresses out walking or at the tea table. Their mistresses, often whitening their skin to highlight the difference in skin tones, treated them as ornaments or toys valuing them until they lost their youth and charm. Advertisements for the sale of black boys were still common place in the 1760’s, including one for the sale of a black boy by auction with the rest of his master’s belongings.

Servants made up the majority of blacks in London, fulfilling many household roles, from grooms, footmen, maids and cooks up to the master or mistress’s trusted personal servants. Large numbers of black musicians (one was a friend of Mozart’s) were to be found in military bands and domestic orchestras whilst black seamen manned navy and merchant vessels. John Parkins, the son of a slave and possibly a former slave himself, spent his whole career as a Royal Navy officer eventually commanding ships in the West Indies.

Many black people were often isolated, especially those in rural areas and small towns – John Dempsey’s Folio of Street People shows two black men “Black Charlie” a shoe seller and “Cotton” a hawker in Norwich. However, by the mid 1700’s small black communities were to be found in London. Some were former slaves who had gained their freedom legally or through charitable masters, remaining in London after the deaths of their owners setting themselves up in small businesses, having gained freedom, money and often white wives. Large numbers were runaways who had fled situations of paternal or abusive control or had committed crimes – domestic service provided rich temptations and opportunities for black servants who had responsibility over household goods. In 1765 Charles Johnson was prosecuted after trying to sell the spoons he had stolen from his master whilst an advert of 1768 reads “Ran away from his Master, a negro boy under five feet high, about 16 years old, named Charles, he is very ill made….”. Runaways faced the danger of recapture and the prospect of enslavement and death in the West Indies. Those that reached London found shelter in the areas of St Giles, Seven Dials and along the Wapping riverside, living alongside the white poor, prostitutes including black women and beggars. Among the best known of the beggars was Black Bill Waters, a violinist who had a pitch outside the Adelphi Theatre in the Strand, who appeared as himself in a musical and whose likeness one could find as a Staffordshire china figure.

In contrast some black slaves were highly thought of - Charles Pompey, Lady Thomas’s negro servant, was buried (age 20) with a tombstone praising his honesty and loyalty - whilst for those who had been given an education, opportunities arose especially in the second half of the century. Ignatius Sancho became the protégé of the Duke and Duchess of Montagu in his teens having been sold to service in London by the age of three. Later in life he married a West Indian woman named Anne and together they opened a grocer’s shop in Mayfair which was visited by shoppers of all ranks. Sancho corresponded with many people including the author Laurence Sterne, took fishing holidays in Scotland and enjoyed taking his daughters to Vauxhall Gardens. Julius Soubise was taken in by the Duchess of Queensbury and given all the attention of a son, educated and taught riding and swordsmanship. He led an extravagant, out of control double life until being sent to live in India where he established a riding school. Perhaps the best known is Francis Barber, Samuel Johnson’s man servant to whom he left money and much of his property, including control over his manuscripts, in his will. Barber was given to Johnston who was averse to slavery and after being educated remained with him for 34 years, even bringing his white wife Elizabeth into the household.

Marriage with white women was not uncommon, many blacks believed (falsely) that marriage in England would automatically confer freedom. There were also fewer black women, some were brought to England by their white fathers and not all biracial children were raised as slaves or sold when their fathers died – often living in a position of neither servant or family as in the case of Elizabeth Lindsay, better known as Dido. Dido, the natural daughter of a black woman and Sir John Lindsay, who acknowledged her paternity and provided for her in his will, spent her life as playmate and later companion to her cousin. A loved member of the family nevertheless when there were visitors she dined alone.

Reliable studies put the black population of London in the 1790’s between ten and fifteen thousand with a strong sense of solidarity growing as the anti-slavery campaign, supported by men such as Josiah Wedgwood and Joseph Turner (ref. the wine cooler in the Collection), gained strength. Inevitably black people would find themselves portrayed in satirical portraits, books, plays and in paintings, however their stories must wait for the next instalment!