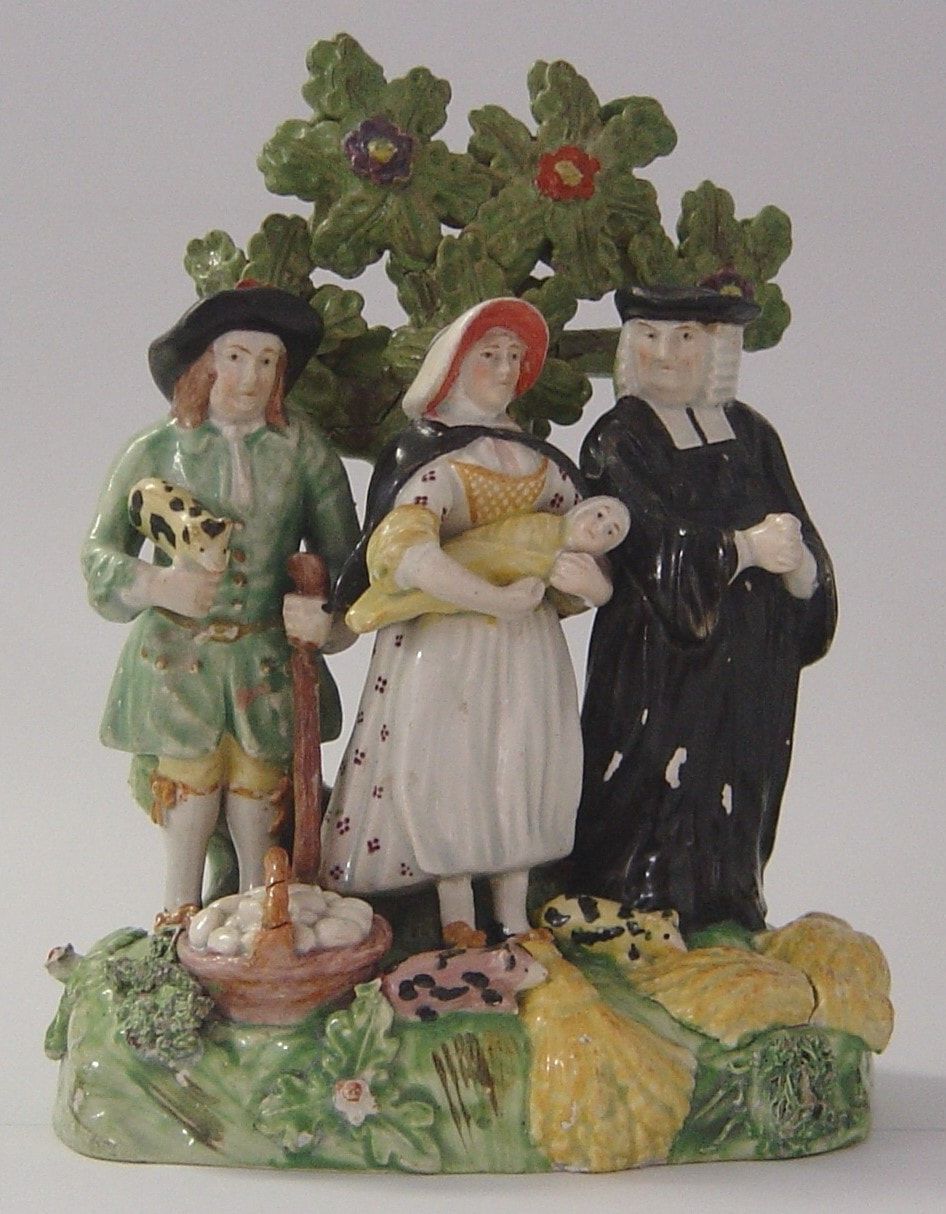 This Staffordshire figure is called The Tithe Pig and shows a farmer, his wife and a clergyman. The farmer is clutching a pig and has a basket of eggs at his feet. The wife, in the middle of the group is holding her baby and has two piglets and a wheat sheaf at her feet. The clergyman is looking at the farmer’s wife most displeased. His mouth is firmly closed and his hands firmly clasped and he’s also standing in front of some wheat sheafs.

So what can it mean?

English church districts have been divided into parishes since Norman times and parishioners supported their clerics and funded pastoral care by paying tithes, of 1 / 10th of their annual produce, so payment was in kind.

Not all parish livings were equal, sparsely populated or poor rural areas couldn’t provide a living for the clergy, so rectors and vicars became “pluralists” which meant that they drew livings from multiple parishes.

But whilst they drew a living from the parish, they didn’t perform their duties or live in them, so you can see why parishioners felt that pluralism and non-residency were indicative of a “greedy” church.

The parsons had a problem with in-kind tythes as well, as to get any money they had to sell the produce in the marketplace in competition with their parishioners. Or they would find the crops, their tythe payment-rotting in the field waiting to be harvested.

Tithes were complicated but for ease of understanding, let’s say they were divided into 2 categories, great tythes – payable to tythe owners and small tythes - payable to vicars. But there were no hard and fast rules and categories could change based on the circumstances which of course caused endless disputes. As an example, if a sow had six piglets rather than 10, what did the church get, or if she had ten piglets could you give the church the runt of the litter.

Parliament didn’t help either, as the link between church and state was strong and a threat to one institution was seen as a threat to the other. No laws were passed to relieve the tithing dilemma, but by 1830 Parliament was forced to act when starving farm labourers in the south and east of England rioted because the heavy burden of tithe payments, didn’t leave any money for wage payments.

Threatening letters were sent to the farmers, but to no avail and although the government suppressed what became known as the Swing Riots, after the man who had sent the letters to the farmers; change was on the way.

The Reform Act of 1832 and subsequent acts until the Great tithe Act of 1836 eased the situation, but it was not until 1936 the final tithe Act was passed, when tithe owners received government bonds in lieu of their tithe entitlements.

So this Staffordshire figure is the potter’s humorous attempt to highlight the injustices and hardship of the tithe system. As well as the figures, prints were made and ballads sung about tithes and a poem was written that gives us a clear understanding of this figure group.

It’s called The Tythe Pig Ballad and goes like this:

In Country Village lives a Vicar,

Fond –as all are! of tythes and Liquor,

to Mirth his Ears are seldom Shut,

But when his tythes he gathers in,

true Parson then – no Corn! No Grin!

Both at a time in Pieces fell;

the Vicar comes, the Pig he Claims,

And the good Wife with taunts inflames,

Kept back the Pig and held the Child,

The figure shows the farmer’s wife attempting to pay the tithe they owe the church not by substituting the child for the pig, as is often thought, but rather telling the clergyman if he wants the pig he must take the child as well.

This one small figure represents, so eloquently all the history and hardship related to the payment and collection of tithes.