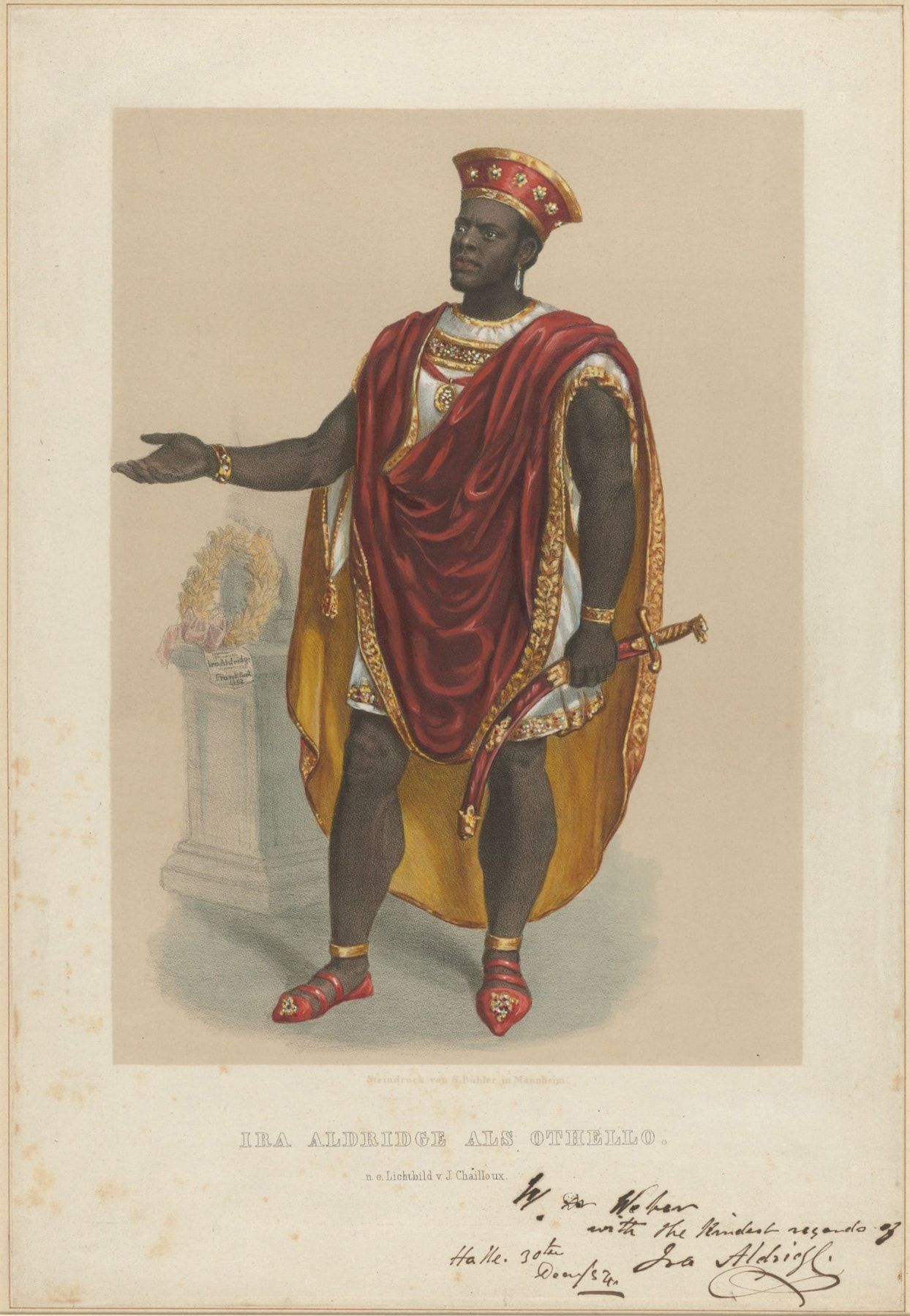 Black characters, played by white actors blacked up with oil and wearing gloves, appeared on stage in the Elizabethan period.

William Shakespeare believed that Moors belonged to the black race and uses the word ‘negro’ as a synonym for Moor, in The Merchant of Venice (1605) Portia comments that the Prince of Morocco ‘has the complexion of the devil’. Whilst in Titus Andronicus the evil Blackamoor, Aaron, being - ‘a negro with woolly hair, his soul black like his face’ – provides one of the earliest typecasts in representing the black man as duplicitous, lustful and evil. Shakespeare based his character Othello on Abd el-Ouahed ben Messaoud (Al-Annuri), the Moroccan envoy to Elizabeth’s court in 1600. Even in the late 1700’s Othello was still being presented as a sub-Saharan ‘black Moor’, played by white actors darkening their skin with stage make-up. David Garrick (1717–1779) played him wearing an elaborately plumed turban and eastern robes to enhance his exoticism. John Phillip Kemble and Edmund Kean (in 1814) both played Othello as a light-skinned North African confirming in their acting the entrenched stereotype of the savagery of non-Europeans at a time when the public was divided over the abolition of slavery and denigration of black people still common. Samuel Taylor Coleridge (1772–1834) in an attempt to validate Kean’s tawny – coloured Moor wrote that “Shakespeare could not have been so totally ignorant as to make a barbarous negro plead royal birth!”

Ignatius Sancho, later to become famous as a letter writer, was the earliest black man to be considered for a role in a Shakespeare play but there is no evidence that he actually performed having offered his services when he had fallen on hard times. A friend of David Garrick he wrote two pieces for the stage as well as music and poetry. It was the American teenager Ira Aldridge (1807-1867, billed as the ‘Gentleman of Colour’, who became the first professional black actor to perform at East London’s Royalty Theatre in 1826 having arrived in London the year before. He also appeared at the Theatre Royal, Dublin in 1831 before playing Othello at the Theatre Royal, Covent Garden in 1833 when some newspapers protested against a black actor being permitted to appear at Covent Garden. Reviews were less than gracious – “being doubtless sufficiently good to be considered very curious” read one! Aldridge went on to play many roles including the title roles of Orinoko in The Slave’s Revenge and Shylock in the Merchant of Venice.

For the theatre goers who preferred comedy - a short comic opera The Padlock by Isaac Bickerstaff was first performed in October 1768 at the Theatre Royal in Drury Lane in which the comic character Mungo, a negro slave, was played by the English actor Charles Dibdin (1745-1814). In 1776 the short comic opera Black–a-more Washed White by Henry Bate Dudley provided another black face role for a white actor. Charles Dibdin’s The Islanders (1780) had a large cast of white characters including slavers, islanders and Indians (Native Americans). There are only two named black characters – the separated lovers Orra and Yanko – both Indians. Orra in early productions was played by the Irish singer and actress Mrs. Margaret Kennedy (died 1793). This was followed in 1787 by Inkle and Yarico a comic opera by George Colman the Younger in which a hapless Indian maid is betrayed by her faithless English lover. This story originated in Richard Ligon (1585?– 1662) A True and Exact History of the Island of Barbadoes (1657, rep 1673) which had many rewritings from the mid-17th century onwards including one by Richard Steele published in the London Spectator in 1711.

Entertainment in regional areas was provided by small travelling companies in which black actors were more likely to appear. 18th century Scottish theatrical records details of a black actress with a remarkable singing voice performing the role of Polly in the Beggars’ Opera as well as the role of Juliet. Pablo Fanque (1810-1871) became the first black circus proprietor having been born William Darby in Norwich. Though William was a free man his father may have come to England as a slave - he is recorded as a butler. Circus’ were popular in this period, not only providing entertainment for the lower classes but employment for black entertainers and musicians. Freaks were often on display too – George Alexander Gratton, the Beautiful Spotted Negro Boy and Saartje Bartmans, the Hottentot Venus being just two.

Whilst black characters were to be found in plays few are to be found in literature by white authors - in Robinson Crusoe (1719) Daniel Defoe introduces a West-Indian Islander and in Samuel Richardson’s Pamela or Virtue Rewarded (1740) Sally Godfrey, Mr. B’s, former girlfriend goes off to Jamaica to marry a planter and sends back a slave boy who does not survive. Black characters are most likely to be servants, especially in children’s literature where child readers were given to understand that black slaves were more or less like servants, presumably based on ignorance of conditions in the West Indies and what was known about black lives in England. In Thomas Day’s novel The History of Sanford and Merton (1783) slavery is mentioned but not focused on - slaves are silent subjects, like the poor and animals to be treated humanely. In Dorothy Kilner’s novel The Rotchfords (1801) a ragged black boy is rescued from begging on the street - a charitable act though the child is regarded as a piece of property. Barbara Holland’s novels have strong moral instruction - Little Creoles (1800) and Barbadoes Girl (1825) feature families returning to England from the West Indies, the children having black child companions / slaves. Both Anna Letitia Barbould and Maria Edgworth (The Grateful Negro, 1804) argued against the evils of slavery as a moral issue but were ambivalent about the complete abolition of slavery and its consequences for British society.

Anti-slavery sentiments were to be found in pamphlets, newspaper article and poems including Thomas Day’s The Dying Negro (1773) and in William Cooper’s The Task, Book Two (1785). Abolitionists supported African writers arguing that by their literacy, merit and adherence to Christianity they were living proof of the immorality of the slave trade. Ignatius Sancho, Ottobah Cugoano and Olaudah Equiano were all well-known black writers on the subject of slavery.

Ignatius Sancho (circa 1729–1780), who had been a protegee of the Duke and Duchess of Montagu was well known in polite and literary circles, his writings appealing to a literary class capable of understanding the plight of other human beings. Born on a slave ship, but raised in England he was a powerful but shrewd critic of the slave trade condemning English politicians as well as attacking the religious justification for slavery. Proud of his African heritage his eloquent and refined style of writing contradicted the common notion that black people were not intelligent. His letters were published two years after his death in five editions between 1782 and 1803 with a prepublication subscription list of over one thousand people.

Olaudah Equiano (known in his lifetime as Gustavus Vassa, circa 1745–1797) was possibly Britain’s first black political leader being a member of an abolitionist group of prominent free Africans living in Britain. He was also the author of the best-selling autobiography The Interesting Narrative of the Life of Olaudah Equiano. Published in 1789 the book gave the British public their first real account of the horrors of the slave ships in the telling of his early life in Africa, enslavement and then life as a free man. Reflecting a sense of humour as well as strong religious beliefs Equiano romantises the African, even quoting from Thomas Day’s poem The Dying Negro whilst maintaining a fierce pride in his race.

Ottobah Cugoano’s (also known as John Stuart, circa 1757– after 1791) Thoughts and Sentiments on the Evil and Wicked traffic of the Human Species (1787) was the first book written by an African to demand the total abolition of the slave trade based on theological and economic justification. In parts biographical, propagandist and anti -European it again appealed to men of enlightened understanding who held the power to create social change.

Books set in the West Indies continued to be popular - Hamel, The Obeah Man by Cynric R Williams was published in 1827 - against a background of slavery Hamel is a dignified and powerful advocate of the rights of the enslaved. Whilst in Barbadoes (1833), Matthew Chapman paints an idyllic picture of his native island whilst warning against the potential horrors of slave rebellion. Inevitably more black characters appeared in novels as the century progressed, begging the question “was Heathcliff black?” Although Wuthering Heights was written in 1847 it is set in 1801 when Liverpool handled most of Britain’s transatlantic trade, evidence was everywhere and northern families grew rich on the proceeds. The Bronte sisters’ school was close to the home of a notorious slave trading family who worked more than thirty enslaved Africans on their property. Throughout the novel Heathcliff is referred to as dark, Mr Earnshaw describes him ‘as dark almost as if it came from the devil’ whilst Nelly says to him ‘if you were a regular black…”. It is an interesting concept that one of the most enigmatic figures in English literature might have been a descendent of a black African!