WHEN CHRISTMAS WAS BANNED 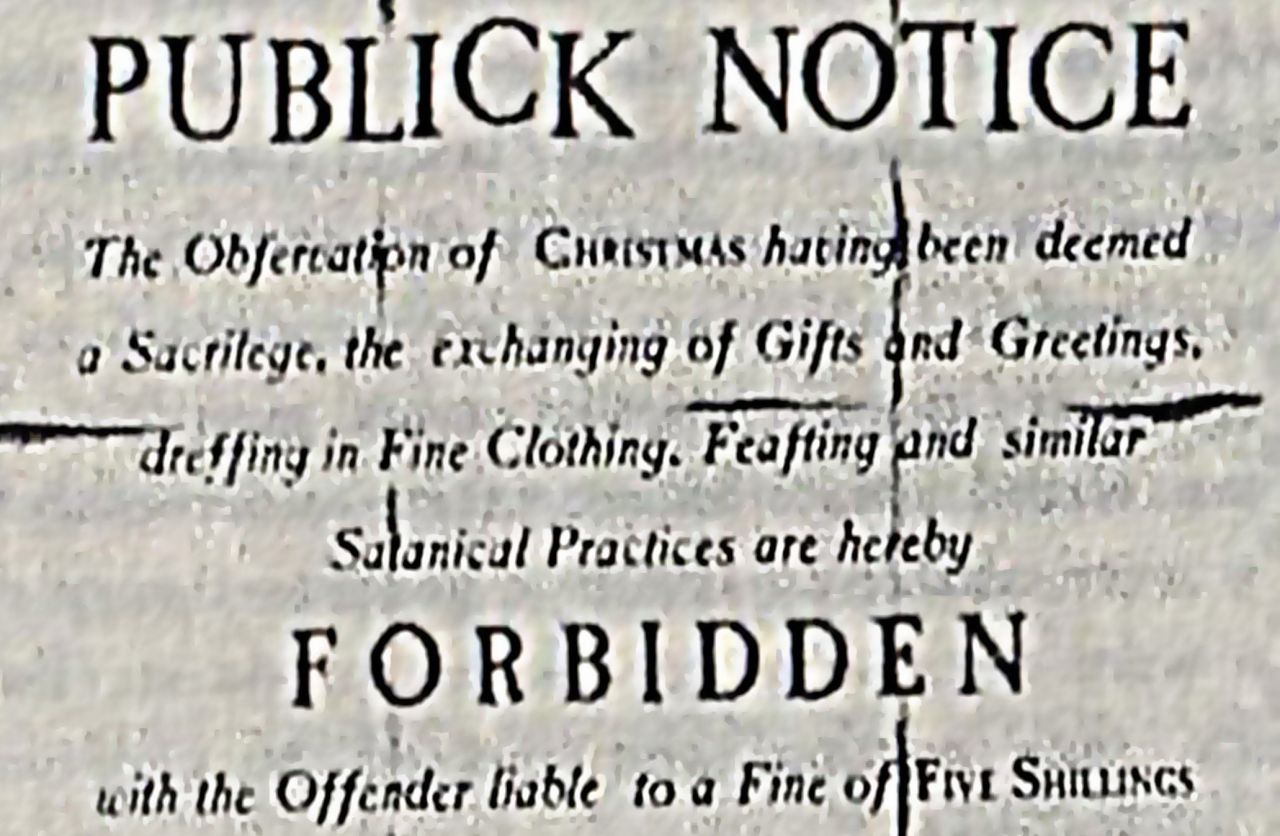 WHEN CHRISTMAS WAS BANNED

From 1647-1660 in England, Christmas was banned. At times, congregations illegally attending church on Christmas Day faced Parliamentarian soldiers armed with muskets, ﬁnes were imposed for eating mince pies and Christmas dinner could be conﬁscated.

By the time of the English Civil War, there was already debate about how ‘religious’ Christmas was. As part of the attack by the Puritans on the established church, all festivals of the church calendar, including Easter and Christmas, were abolished by Parliament in 1647. The Book of Common Prayer had been replaced by the Directory for Public Worship, and Armada Day and the discovery of the Gunpowder Plot were substituted as national feast days.

So, Christmas went underground. The 17th century diarist John Evelyn succeeded in finding churches in London which celebrated church feast days using the banned Book of Common Prayer, and recorded in his diary for Christmas Day in 1657: Sermon Ended, as (the minister) was giving us the holy Sacrament, The Chapell was surrounded with Souldiers: All the Communicants and Assembly surprised & kept Prisoners by them … (They) examined me, why contrary to an Ordinance made that none should any longer observe the superstitious time of the Nativity I durst offend.

The congregation continued even though the troopers’ held muskets to their heads as they went up to receive Communion ‘as if they would have shot us at the Altar.’

However, it was in suppressing Christmas feasts at home that Parliament most misread English public sentiment. Prior to the abolishment, overindulgence at Christmas had reached almost bacchanalian proportions, harking back to the ancient pagan and Roman mid-winter festivals that Christmas replaced. There was great feasting and drinking, and little work was achieved over the Twelve Days of Christmas.

Christmas in 1631 is described by John Taylor. Following church ‘some went to cards, some sung Carrols, many merry songs, some to waste the long night would tell Winter-tales’. There were maids with Wassail, the gargantuan feast, and then dancing and merriment under the ‘kissing bush’ suspended from the ceiling. Homes were decorated with greenery, holly, rosemary, ivy, bay, and mistletoe. Wassail was hot spiced wine or ale served from a decorative bowl to toast to good health.

The food itself included mince pies, then known as shred pies, which were made from shredded or minced mutton or beef, mixed with suet, vinegar, prunes, raisins and dates and coloured with saffron. Plum pudding was also made from beef, raisins, currants and bread. Both these were banned. Meats were served – beef, mutton and pork, accompanied by mustard – and dessert was cheese, apples and nuts. Parliament imposed fines for drinking ale and gave orders that food being prepared for the feast could be seized.

The ban on Christmas remained in place through the Protectorate when Oliver Cromwell was Lord Protector, followed on his death by his son Richard. In 1660 Parliament dissolved itself, ordered new elections, and Charles II was restored to the throne. All legislation from 1642-1660 was pronounced null and void; the Parliamentarians had gone; the king was back and so was Christmas.

This article was first published in fairhall 4, November 2011, pp 13