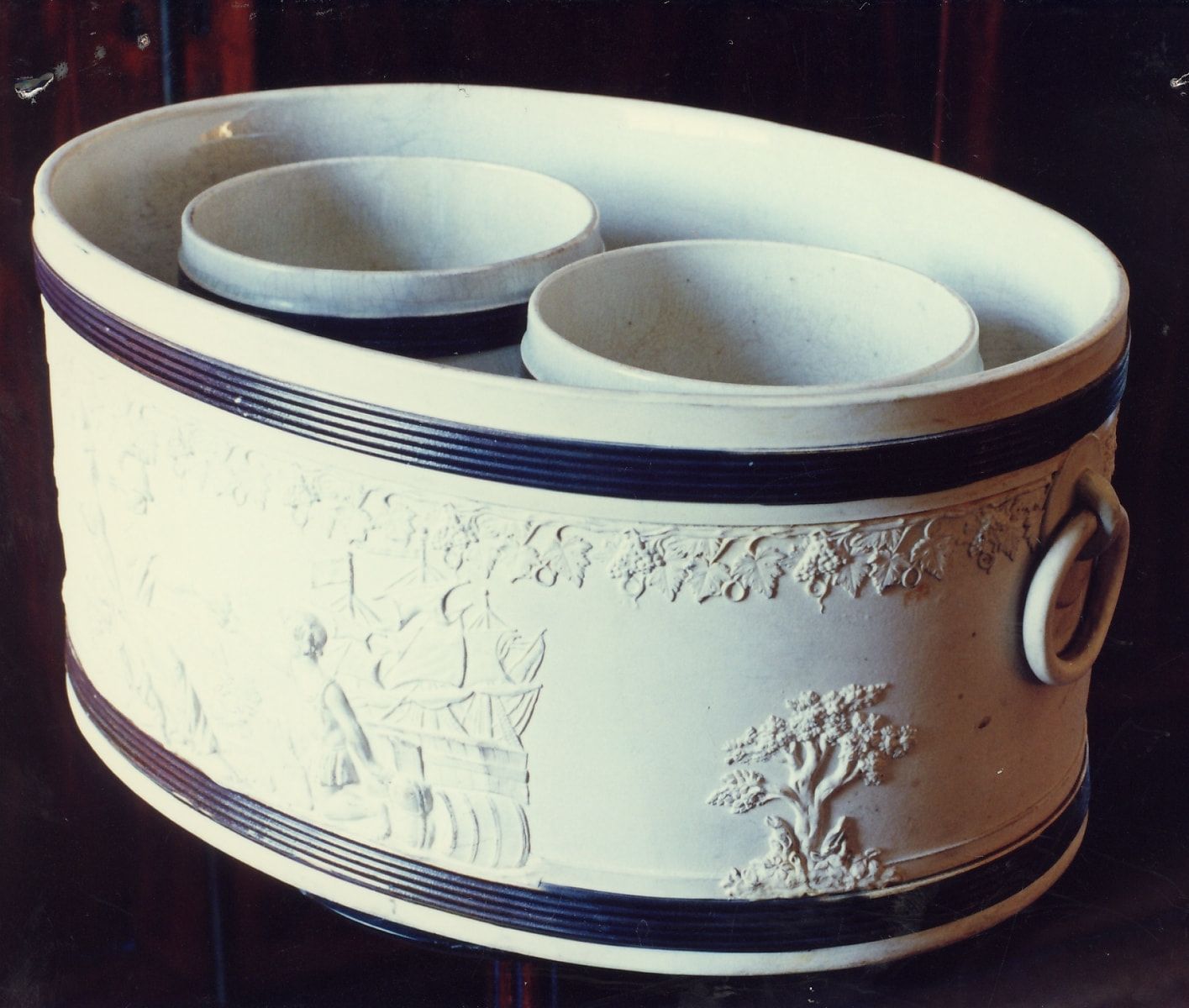 One of the less flamboyant items in The Johnston Collection is a twin-cylinder wine cooler manufactured around 1800-1810 at the Turner pottery in Lane End, Staffordshire.

The ceramic body is unglazed stoneware, decorated with two bands of brown to simulate a wine barrel. The sprigged figures applied to the exterior include a classical scene representing Hope and Plenty and an idealistic Britannia assisting the slaves.

The latter is of particular interest because slavery had been abolished in England in 1772, and was declared illegal elsewhere in the British Empire in 1833. Josiah Wedgwood was one prominent potter who campaigned vigorously for its abolition, so it is not surprising that William Turner, who was a close friend of Wedgwood (though a fierce competitor) would have held similar views. As Wedgwood had done in his famous 1786 slave medallion inscribed, “Am I not a man and a brother?” Turner could also be expected to demonstrate his enlightened position in his wares.

The Turner family business commenced in 1760, just as British pottery was entering its heyday as part of the Industrial Revolution. The original John Turner, the son of a lawyer, was an energetic master potter, experimenter and clay hunter who had developed a range of stoneware and earthenware and had been accorded the title “Potter to the Prince of Wales”. After his death in 1787 his sons John II and William continued and expanded the business, producing mostly decorative pottery, teawares and other utilitarian items whose quality rivaled that of Wedgwood, Neale, Mayer and other manufacturers. The Turner recipes were so innovative that they were often written in French so as to outfox competitors; a necessary precaution at a time when potters flagrantly copied ingredients, techniques and decorative ideas from each other.

Among the Turners’ particular achievements was a jasper similar to the waxy and semi-translucent body that had been developed by Wedgwood: a cane or buff-coloured elegant stoneware and a dense black basalt of exceptional quality. Turner’s jasper includes a striking peacock blue and a slate grey-blue more subdued than the blues in Wedgwood jasper. By 1800, after discovering a new source of clay, the Turners had also developed a fine creamy-white ironstone-like earthenware which became known as “The Turner Patent” and was widely accepted by the growing British middle class. While Wedgwood, Turner and several other notable potters were heavily influenced by the neo-classical movement, the Turners also produced pots decorated with more homespun and often whimsical scenes such as butterflies and birds, an archery lesson, a fox hunt, topers, and even parsons in inebriated states. Perhaps the factory’s most widely recognised production items were the stoneware jugs whose necks were decorated with a band of enamel in deep brown and which featured hunting scenes in sprigged decoration.

Like some other British potters, the Turners established markets in the Low Countries and in France. However, by the late 1780s some Staffordshire potters were having trouble obtaining payment from their aristocratic French customers, causing William Turner to visit France to retrieve the situation. There he fell into the hands of the revolutionaries just as they stormed the Bastille in 1789, and it was only after the intervention of the Marquis of Stafford that he was released.

The revolution and subsequent struggle for supremacy between Britain and France devastated the cross-channel pottery trade and by 1806 John and William were bankrupt. Both later re-appeared in partnership with other potters or individually until William finally closed his business in 1829. Thus ended an enterprise that had flourished for nearly 70 years, and which arguably ranked only second to the great Wedgwood company in terms of production output and quality.

EDITOR’S NOTE: Ken Barnes and his wife Christine were first introduced to pottery in the neo-classical style through a Wedgwood exhibition in the mid 1970s. From there they developed a more general interest and in Ken’s case an obsession with stoneware. Because Ken’s work took him abroad very often, including several years in the UK and the US, he had the opportunity to expand his knowledge and gradually build a collection. He is a member and past-President of the Wedgwood Society of Australia and a member of the Wedgwood Society of Washington, DC and has written and lectured extensively on his favourite hobby.

This article was originally published in Fairhall, Issue 5, March 2012, pp 18.