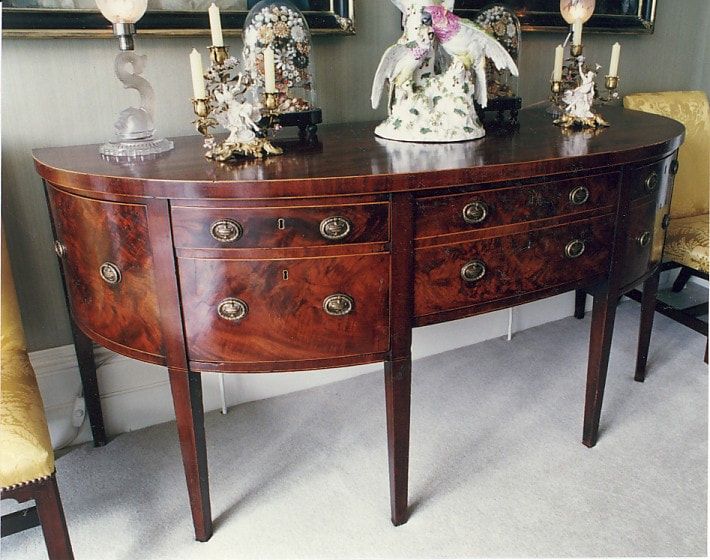 By 1780s the sideboard had come a long way from its origins in the sideboard table, court cupboard and the medieval dresser. It was used as a serving board on which food was ‘dressed’ and to store the accessories required throughout the meal.

The sideboard of Robert Adam’s design consisted of a long table flanked by urns or pedestals, with a wine-cooler underneath. He thought such a rich composition was appropriate for the splendour of the dining rooms of great houses, where often, political decisions were made. Cabinet makers in the 1770s were producing versions of the fitted or cellaret sideboard for rooms too small for the pedestal arrangement. It consisted of a side table, partly filled by cupboards flanking the centre where there might be a single drawer in the table frieze.

Thomas Shearer, in 1788, was the first to illustrate a specimen of a side table and flanking pedestals joined to form a single expansive unit. He fitted one pedestal with a wine drawer and the other with racks and a heater for warming plates, costing his design at £13. It was somewhat ungainly, but was bettered by Sheraton who arranged tall knife vases on the pedestals to flank an ornamental brass

rod intended for supporting large dishes Both Shearer and Hepplewhite suggested a number of shapes for the top: bow, serpentine and semi-circular with marble and slate tops that were useful for serving hot dishes.

Sheraton invented designs with sham drawer fronts as cupboard doors to conceal fittings for plates and bottles. He also invented tiers of circular shelves above the rounded projecting ends, fitting the whole front of the central area with silk-draped cupboarding. When a pot cupboard was included, this might be opened from the back by pressing a hidden catch so as to render it inconspicuous.

This sideboard at The Johnston Collection, lived for many years in the vestibule next to the ballroom at Government House. A few years ago, then Director Nina Stanton recalled this piece back to the ‘family home’, Fairhall. This was replaced at Government House with another appropriate piece of Collection furniture that remains there today.

Butler’s tray | called by Sheraton a sideboard for the butler. Specimens are known from 1720s. The tray could be carried into the room fully prepared with wines and glasses and placed where the butler could serve the company.

Knife box | Decorative receptacle for the silver flat-ware and cutlery used in the dining room – the forerunner of the flat box known to late Victorians as a canteen. Valuable tableware was washed in the dining room for each course rather than risking loss in the kitchen quarters. The boxes were compartmented and the owner could tell at a glance if any cutlery was missing. They were made in pairs and sets of three through the second half of the 18th century and in sets of four towards 1800.

Plate pail | Straight-sided bucket. It had an opening (slide slit) from top to bottom that was essential for lifting plates out of the vessel. The sides were often perforated, in order to allow the plates to warm near the fire at informal meals.

Sideboard urn | Fashionable ornament. Usually recorded as a pair of vases. Sheraton notes they have two purposes (a) for water to be used by the butler (b) sometimes as knife cases.

Sideboard pedestal | Served two purposes (a) it could be fitted with a rack for warming plates but then required a lining of tin to avoid damage from the heater (b) the other pedestal would be the cellaret – compartmented for twelve bottles laid on their sides.

Cellaret | Lidded, metal lined, and locked piece of furniture, compartmented for keeping wine bottles. It accompanied the Georgian sideboard table and was low enough to stand underneath it.

This article was originally published in Fairhall, Issue 5, March 2012, pp 15.