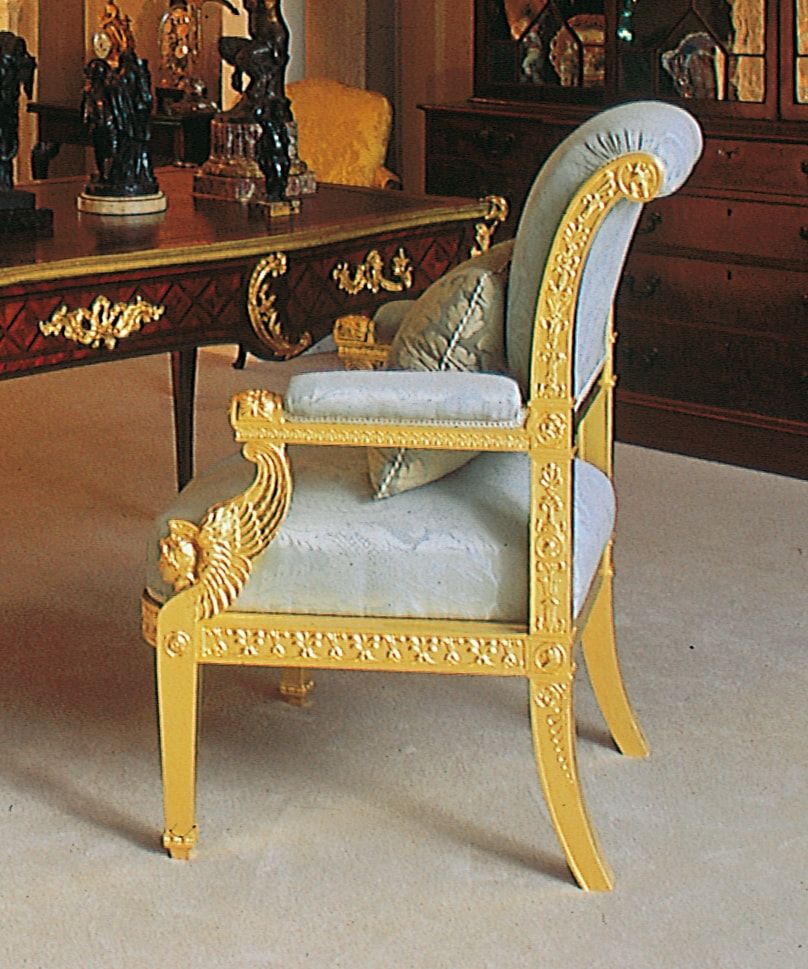 The French Revolution of 1789 had an impact on all aspects of French life, insofar as the leaders of government now wanted to distance themselves from any association with the monarchy. With the appointment of Napoleon Bonaparte as First Consul, those who made money from the revolution thought it now safe to spend it, which they did, on the arts and decorative arts.

Napoleon told Intendant-General Daru in 1805, ‘My aim is to make the arts address subjects that will keep alive the memory of the achievements of the past fifteen years’ As Consul, then Emperor, he used art to reflect the glory of France, and possibly himself, and commissioned his architects, Charles Percier and Pierre Fontaine and the artist Jacques-Louis David, to design a new style inspired by the grandeur of imperial Rome and the French love of luxury. Dominique Vivant Denon, a French artist and archaeologist who accompanied Napoleon on the Egyptian campaign of 1798, sketched monuments and antiquities while there, and these sketches provided a basis for Egyptian ornamentation to the style.

This new style became known as the Empire Style, named for the reign of Emperor Napoleon Bonaparte. It had aspects of neoclassicism and the Directoire inspired by ancient Roman ideals of heroism, purity and civic virtue reflected in purity of line, functionalism and simplicity in architecture and decorative arts. Napoleon thought it important, however, to include luxury by decorating with rich textiles such as silk from Lyon.

Percier and Fontaine were commissioned to decorate Napoleon and Josephine’s residence Malmaison and Tuileries Palace. Walls of the house were either decorated with colourful striped wallpaper or draped with fabric emulating the tents used in Napoleon’s campaigns. The patriotic tricolour palette of red, white and blue was supplemented by shades of green, golden yellow and violet. The chimneypiece was classical in style with a marble mantel flanked with columns or caryatids. Doors were like triumphal arches.

Furniture was influenced by classical styles from Greece and Rome with rectangular and symmetrical lines and decorated with Egyptian style gilt bronze or ormulu mounts in the shape of sphinxs, griffins, swans, caryatids and eagles and motifs associated with warfare and victory. Much of the furniture was made by Jacob Desmalter and included pedestal based tables, the klismos chair (a type of ancient Greek chair), the Egyptian X-based folding stool and the tripod table. A ‘gondola like’ bed was made to be positioned in an alcove or against the wall. Chairs had sabre-like legs and armrests and were made comfortable by upholstery.

Mahogany was the wood of choice for furniture, but was expensive and scarce due to the blockade of imports from British colonies, so native woods like Bird’s eye Maple and Walnut were used instead.

The Empire style in dress also found its inspiration in classical times and for women it emphasised femininity and grace with flowing floor length creations, having décolletage, girdled under the breasts and made from light fabric such as muslin. Men’s fashion was elegant featuring a cutaway tailcoat revealing a waistcoat and high collared shirt with cravat.

In architecture, the style emulated the buildings of the Roman Empire and was seen in Parisian buildings such as The Church of La Madeleine (L’Église Sainte-Marie-Madeleine) and the Arc de Triomphe du Carrousel, Arc de Triomphe de l’Étoile, and Vendôme column.

The Empire style was copied throughout Europe with each country adapting it to its own national taste. In England it informed Regency style, Germany used it to inspire its Biedermeier style and it influenced the Federal style in the USA. The Empire style fell out of fashion in France after Napoleon’s downfall although neoclassicism continued to influence decorative styles.

This article was originally published in Fairhall, Issue 6, July 2012, pp 12.