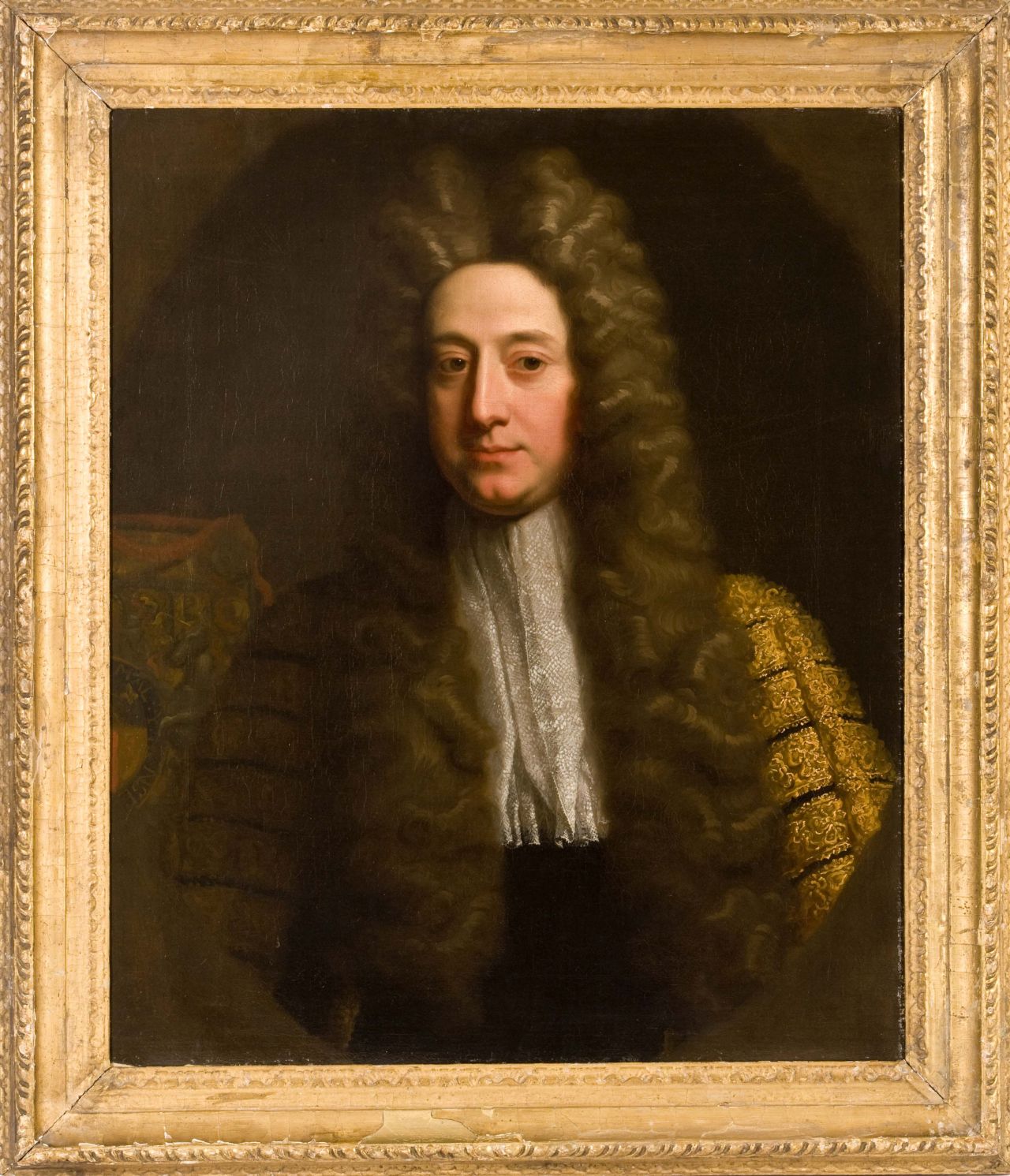 The portrait of Lord Chancellor William Cowper (English, circa 1665–10 October 1723), was done in 1706 by the renowned painter Jonathan Richardson who is widely held in private and public collections including the National Portrait Gallery in London.

William Cowper was a key player in the transition from the Stuart through to the early Georgian period in a number of roles including that of the first Lord High Chancellor of Great Britain in 1707.

William Cowper, 1st Earl Cowper was the son of Sir William Cowper, Bart., of Ratling Court, Kent. He was educated at St Albans School. In about 1686 he married his first wife Judith, daughter and heiress of Sir Robert Booth, a London merchant and was called to the Bar in 1688. Having promptly given his allegiance to the Prince of Orange on his landing in England in 1688 he was rewarded with the position of Recorder of Colchester in 1694. He enjoyed a large practice at the bar and had the reputation of being one of the most effective parliamentary orators of his generation. He was elected to Parliament in 1695 and 1698 but lost his seat in parliament in 1702 owing to his unpopularity caused by the trial of his brother Spencer on a charge of murder. (He was acquitted).

By 1701 Cowper was a leading player among the Whigs and enjoyed the friendship and active patronage of the formidable Sarah, Duchess of Marlborough. In 1705 his first wife died in April and he was later appointed Lord Keeper of the Great Seal and took his seat on the woolsack without a peerage presiding over the House of Lords. In 1706 he conducted the negotiations between the English and Scottish commissioners for arranging the union with Scotland. He secretly married for a second time the beautiful 20-year-old Mary, daughter of John Clavering, of Chopwell, Durham. In November of the same year, he succeeded to his father's baronetcy; and on December 14 he was raised to the peerage as Baron Cowper of Wingham, Kent

When the union with Scotland came into operation in May 1707 Queen Anne in Council named Cowper the first Lord High Chancellor of Great Britain until he resigned the seal in 1710. On the death of Queen Anne, George I appointed Cowper one of the Lords Justices for governing the country during the king's absence, and a few weeks later he again became Lord Chancellor. He was Attorney-General to the Prince of Wales in 1714.

A paper which he drew up for the guidance of the new King George I on constitutional matters, entitled An Impartial History of Parties, marks the advance of English opinion towards modern party government. Cowper supported the impeachment of Lord Oxford for high treason in 1715, and in 1716 presided as Lord High Steward at the trials of the peers charged with complicity in the Jacobite rising.

As Lady of the Bedchamber to Caroline, Princess of Wales, his wife Mary immediately put her new-found access to court and her fluent French to use in acting as a go-between for her husband. The first day she attended the Princess she gave her Bernstorff’s ‘A Treatise on the State of Parties which she “had transcribed and translated for my Lord, in French and English, to give the King”.

On 18 March 1718 he was created Viscount Fordwich and Earl Cowper, and a month later he resigned office on the plea of ill-health, but probably in reality because George I accused him of espousing his son the Prince of Wales's side in his (i.e., George Augustus, Duke of Cornwall, the later George II's) quarrel with the King. While he retired to his country seat, Colne Green, his wife Mary remained at Court as Lady of the Bedchamber to Caroline, Princess of Wales and in her diaries aimed to write an accurate account of events at Court. (The diaries covering October 1714 to October 1716 and April and May 1720 were later published by Charles Spencer Cowper in 1864).

Taking the lead against his former colleagues, Cowper opposed the proposal brought forward in 1719 to limit the number of peers. He died after a short illness on the 10th of October 1723 at his residence, Colne Green, in Hertford, built by himself in 1704 (demolished by the 5th Earl in 1801 on advice from the landscape designer Repton) nearby to which the later mansion of Panshanger was built in 1840 (and also sadly demolished in1954). The 1st Earl left two sons and two daughters by his second wife Mary, who died grief stricken the following year. He was grandfather of William Cowper, the poet.

This purchase was supported by a generous donation from the former President of the Friends, Andrew Dixon. The portrait was sourced in London from the firm of Philip Mould Historical Portraits, London. Since the painting arrived in December research has continued and we have discovered that there was a sale of some of the pictures from Panshanger at Christie's in St James Square on 16 October 1953 and it was reported that the family retained many of the finer paintings.

Originally published in The Friends of The Johnston Collection Newsletter, Summer 2007, No.32

The information in this article was compiled from a number of sources including Encyclopaedia Britannica; Oxford Dictionary of National Biography and http://experts.about.com/e/w/wi/william_cowper,_1st_earl_cowper.htm