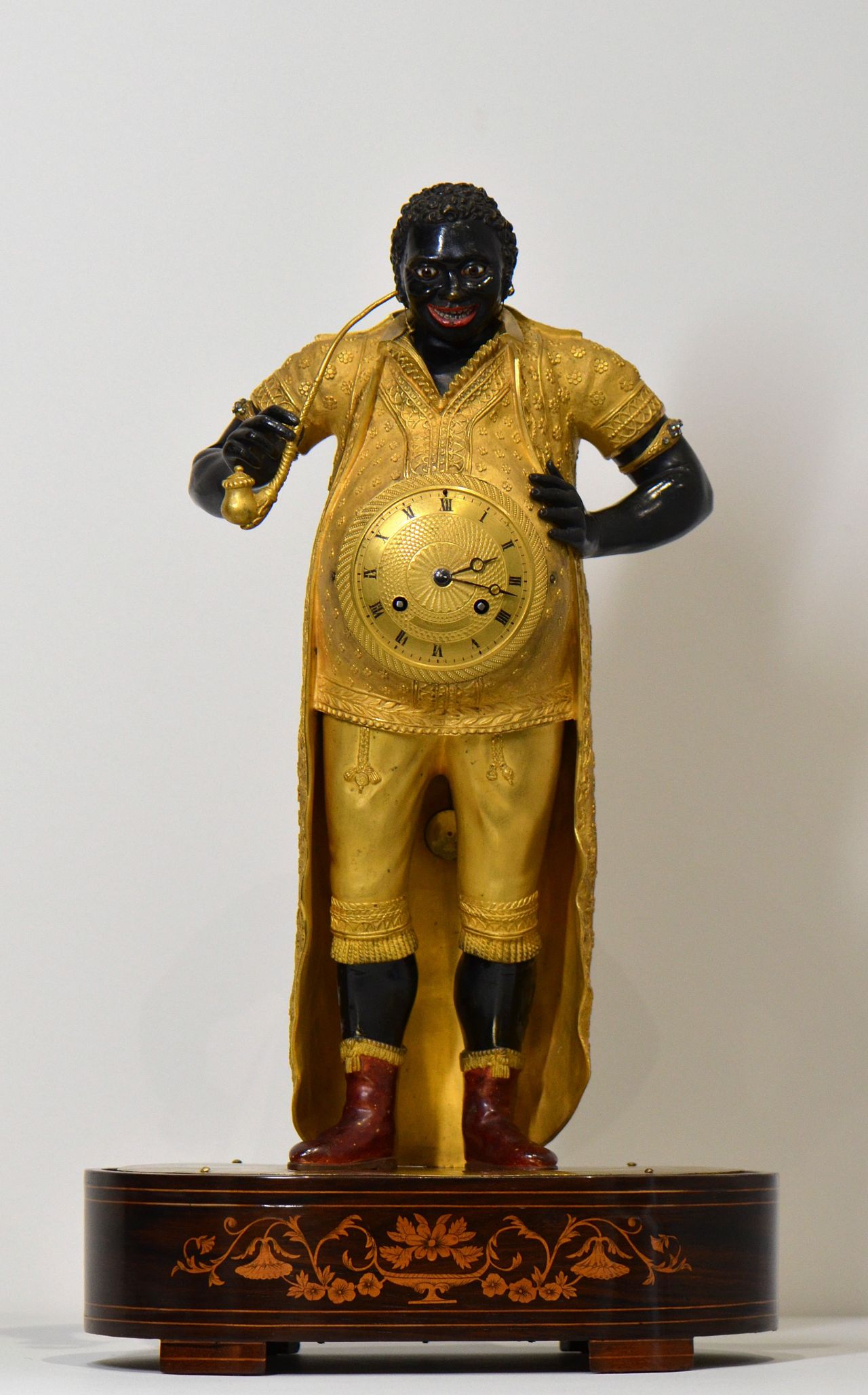 Many visitors to The Johnston Collection have been fascinated by this clock (shown below), so may like to know the story behind it.

The Gilded African was the name given by Napoleon to Toussaint L’Ouverture (1743-1804), the liberator of Haiti.  The Swiss clockmaker, Jean David Maillardet (1768-1834) took this derogatory description literally, creating a gilt bronze automaton figure of Toussaint.

Toussaint, meaning ‘All Saints,’ was a self-educated slave, freed shortly before the slave uprising in the French colony of Haiti in 1791.  He became its military leader and organising genius.  The ‘Ouverture’ in his name, meaning ‘opening’ was given to him because of his seizing the advantage in his swift moving campaigns.  He used it later of himself when rallying the people - in the sense of an opening or pathway to freedom.  Their rebellion against the French was the only successful slave revolution in recorded history.  Haiti prospered under Toussaint’s leadership.  He reorganised the government and instituted public improvements.

France had proclaimed freedom for all slaves at the National Convention in 1793.  However, Napoleon wanted to reinstate slavery, and in 1802 he sent a large force to subdue Toussaint, who had become an obstacle to his colonial ambitions in the region.  There was fierce resistance; Toussaint was treacherously seized and sent to France.  General Leclerc, leader of the French forces, insisted that for Toussaint there must be “no possibility of escape and return to St Domingue where he has the power of a religious leader…[he] must be put in some fortress in the centre of France.”  He was thus put in a dungeon in the Jura Mountains, and after terrible privation, he died of cold and hunger.

The Gilded African clock is an example of automata - that is the imitation of life and nature by mechanical means.  It originated with the ancient Greeks, and continued to be a source of fascination throughout history.  The making of automata reached its peak with Carl Faberge, jeweller and lapidary to the Russian Czars.

A critical element in the evolution of automata was the combination of the art of the jeweller and that of the clockmaker.   At first this was on a large scale, as in our own Gog and Magog in the Block Arcade in central Melbourne.  The eighteenth and nineteenth centuries saw the production of automata of infinite variety for the amusement of the wealthy.  Such is Maillardet’s Toussaint, with his exaggerated African features, head and eyes that move, and a stomach that is a circular clock.  He is richly clothed in shirt and trousers of gold, albeit gilt bronze.

The Gilded African is a caricature which demeans Toussaint and makes him a figure of ridicule.  Wordsworth, on the other hand, wrote a sonnet extolling his virtues whilst he was still in prison, the last lines of which are:

Thy friends are exultations, agonies,

And love, and man’s unconquerable mind.

This article was originally published in fairhall, Issue 1, December 2010, pp 7-8