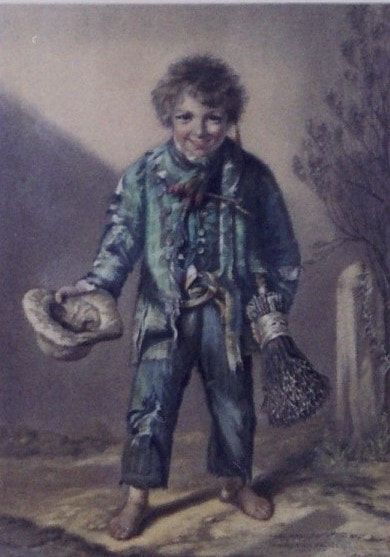 Crossing sweepers were common in the streets of English cities in the 18th – 19th centuries. They were mainly young poor boys who would sweep the path ahead of a wealthy lady who wanted to cross the street without soiling her long dress. As the boy could then expect payment, this occupation was not viewed as begging but as legitimate employment. One shilling a day was considered “a good day’s earnings” in the 19th century.

The boys would work individually or in groups. However, they became very territorial and would fight others in order to maintain “their turf.”

Jo, a young homeless boy, was a character in Charles Dickens’ Bleak House (1852-3) who was a crossing sweeper who “fights it out at his crossing among the mud and wheels, the horses, whips, and umbrellas, and gets but a scanty sum.” This character was supposedly based on a true person and the book enabled Dickens to address juvenile vagrancy that was a serious social problem at that time.

Included in the exhibition is another variation on this theme by the English artist, George Baxter.

This article was originally published in Fairhall, Issue 2, April 2011, pp 14.