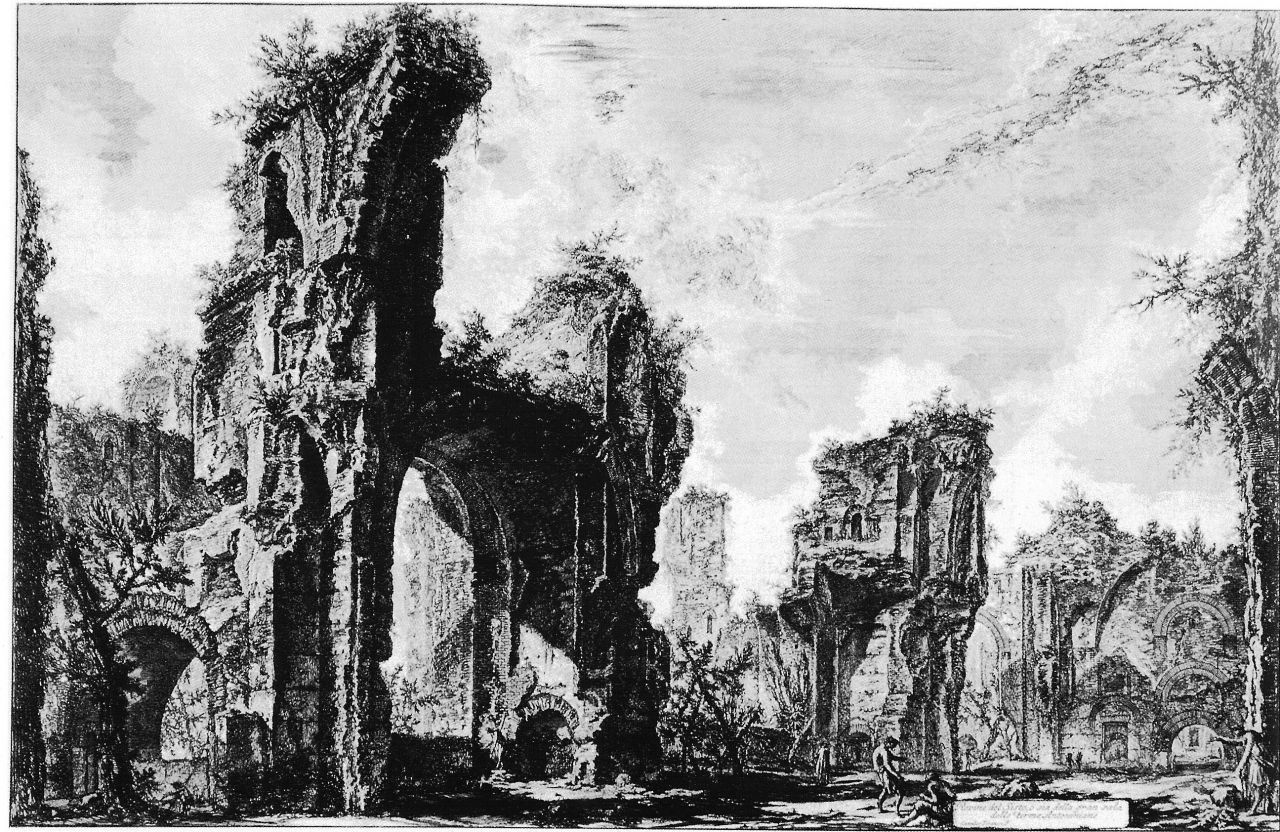 The subject of the engraving is the interior of the central hall of the Baths of Caracella. It is part of a series by Piranesi entitled Veduti de Roma (The Views of Rome) which was commenced in 1745.

Rome was a lifelong obsession for the Venetian born engraver Giovanni Battista Piranesi (1720-1778).  Combining the eye of an artist, the structural knowledge of an architect and the fieldwork of an archaeologist, he documented the ruins of Classical Roman architecture at a time when many of these lay half buried in otherwise deserted pasture land.

The spectacular large plates he produced became popular souvenirs for educated European travellers who were beginning to flock to Rome in the 18th century.  Carried back to the travellers’ home countries, these volumes served as pattern books for the architecture and design of the Enlightenment.

Our engraving shows a view of ruins with a large barrel vaulted arch to the left middle ground.  The scale of the ruins is suggested by the size of the figures in the foreground.  A gentleman is visible in the centre foreground and rustic figures of peasants are grouped together in the right foreground.

In 1754, Robert Adam wrote of Piranesi that “so amazing and ingenious fancies as he has produced in the different plans of the temples, baths and palaces and other buildings I never saw and are the greatest fund for inspiring and instilling invention in any lover of architecture that can be imagined.”(1) Horace Walpole later spoke of “…the sublime dreams of Piranesi.” (2)

The Baths of Caracalla located by the ancient Appian Way in Rome were named after the emperor Caracalla who reigned from 211-217 CE.  This building is among the most monumental and imposing archaeological complexes of the entire Imperial epoch.  The ruins of the baths are enormous and very well preserved.  They are a magnificent testament to Roman architecture, with many arches used throughout the building for both stability and aesthetics.  The marble walls were littered with paintings and mosaics, the floors were also mosaics, and painted sculpture adorned many of the alcoves.

600 marble workers and 6,000 tradesmen were employed to labour on this one project. It is said that Septimus Severus issued 13,000 prisoners of war from his campaigns in Spain to level the ground for the Caracalla Baths.  Many of the sculptures were on a very grand scale - the Hercules figure that was found in the Baths in the 16th century stands 10ft 6 inches tall.  The Baths were designed with a central axis with the intention that from end to end an assortment of statues could be visible.

The Baths accommodated some 1600 bathers in three bathing rooms. These rooms consisted of the frigidarium (a cold pool), the tepidarium (a lukewarm pool) and the calidarium (a hot pool).  The underground vaulted facilities for servicing the hot baths and lukewarm baths were incredibly complex. There were gymnastic areas, other areas for games and competitions and an Olympic size pool at the back reserved for swimming.  There were libraries and extensive gardens to walk in and enjoy.  The Baths provided two basic functions for ancient Romans, they were a necessity in sanitation as most of the population of Rome lived in crowded tenements without running water or sanitary facilities, and they provided an opportunity to socialise.

Although in semi ruins now, The Baths of Caracalla are a must see when visiting Rome. They are extraordinary when lit up at night, and during summer time the Baths become a platform for cultural events such as operatic performances.