THE ART OF DINING: TABLE MANNERS 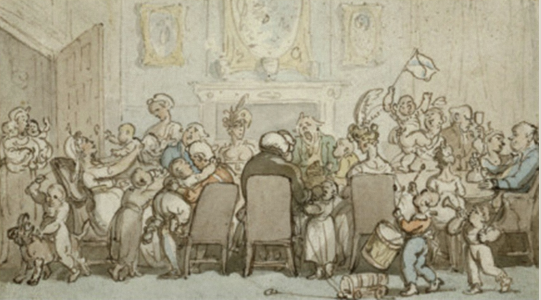 THE ART OF DINING: TABLE MANNERS

It is not known when the concept of table manners was initiated, but in ancient Greece, Aristotle wrote a treatise on diners’ behaviour at Spartan Community Feasts.

Hesiod, a Greek poet, around 700 BCE wrote “At the abundant dinner of the gods, do not sever with bright steel the withered from the quick upon that which has five branches” which translated to fingernails were not to be cut at the table.

Margaret Visser in her book The Rituals of Dinner writes, ‘Table manners are a system of civilised taboos which came into operation in a situation fraught with potential danger. They are designed to reduce tension and to protect people from each other.’ In medieval dining, table implements could become weapons if violence erupted. Knives on the table therefore had to be placed with blades facing in towards the plate, not facing one’s neighbour and must never be held upright, waved about or pointed at people. They had to be kept sheathed until the time of carving, thus reducing any potential tension. It wasn’t until 1669 that the French King Louis XIV ordered that table knives have rounded ends, as fork usage was common and knives were no longer necessary for piercing food.

In medieval times, jingles would be memorised that taught courtesy and consideration of others when dining, such as:

There was an Old Person of Buda

Whose conduct grew ruder and ruder

Till at last, with a hammer, They silenced his clamour.

By smashing that Person of Buda

Manners ensured that everyone knew how to behave at any event and according to a 16th century jingle ‘Meat feeds, cloth cleeds, but manners make the man’ so what you eat and what you wear are less important than how you do both.

In Hugh Rhodes’s Boke of Nurture 1577, we read – ‘Belch near no man’s face with a corrupt fumosity; Turn from such occasion, it is a stinking ventosity.’

By the 16th century, some diners became increasingly disgusted with the lack of general table manners and courtesy. Erasmus (1469-1536), a Dutch humanist, social critic and theologian, wrote the first complete book on etiquette and manners in 1530, called On the Civility of the Behaviour for Boys. It was a very popular book, translated into many other languages and its influence continued for many centuries. Amongst his rules he stated that ‘it is equally impolite to lick greasy fingers or to wipe them on one’s tunic. You should wipe them with the napkin or on the tablecloth.’ To speak with your mouth full is impolite and dangerous. The knife should never be used for picking one’s teeth. When eating from a communal dish, chewed bones should not be placed back into the dish.

Personal hygiene and cleanliness were seen as essential at table. It was regarded as rude to spit on the table. Polite people spat discreetly on the floor beside them and could rub conspicuous traces away with their feet. Equally, one should refrain from expectorating in the dish used for hand washing.

Good manners had to be learnt if one wanted to be accepted in higher levels of society. ‘If you ‘arrive’ at the table of the great, and there disgrace yourself, you will never be invited again.’ Books on etiquette became necessary to keep abreast of the latest fashion in table manners.

The treatise of Erasmus in 1530 ends with very important advice that today we can identify with: ‘The essence of good manners consists in freely pardoning the shortcomings of others although nowhere falling short yourself.’

Above | Thomas Rowlandson (1756 – 1827) The Breedwell Family, 1807 pen and ink and watercolour on paper Private Collection