THE ART OF DINING: ICE CREAM 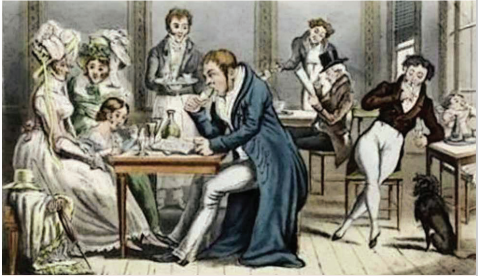 THE ART OF DINING: ICE CREAM

Summer is approaching and a favourite dessert at this time of the year is ice cream. Much of the history of ice cream is unproven folklore. We know that Alexander the Great (356-323 BCE), loved honey and nectar flavoured ice and that Nero the Roman Emperor (37-68 CE) had a passion for snow brought down from the mountains and flavoured with different fruits. Some people speculate that Marco Polo in the 13th century brought the idea of flavoured ice back to Italy after his travels in China.

When Catherine de Medici of Florence married the French King, Henry II in 1533, she took with her recipes for a frozen ice / granita and soon French cooks were making this delicious dessert.

It is unknown when dairy ice cream was first made, but it was shown that sweet cream (the richest part of milk) developed a firm consistency as it chilled and became known as ‘Iced Cream.’ This could be flavoured with seasonal fruit. It is thought the recipe was perfected in France or Italy in the 17th century.

Ice cream became the pièce de résistance at court dinners of Louis XIV of France and Charles II of England, and both had royal icehouses built. Serving of ice cream showed one’s wealth and status, so it was initially reserved for nobility. In 1670 the first ice cream shop selling ices and sherbets was opened in Paris by Sicilian, Francisco Procopio, and was hugely popular. Mrs Mary Eales, confectioner to Queen Anne, published the first English ice cream recipes in 1718, after which it spread to cafes to be eaten as a confection. Favourite flavours were pistachio, brown bread, pineapple and berry.

In 1853 in England, William Fuller patented an ice cream freezing machine that used salt and ice: ‘With one hand the operator turned a central handle which rotated the bowl-shaped vessel containing the preparation to be frozen, with the other, using a spaddle, he scraped down the ice crystals as they formed. The turning and scraping continued throughout the freezing process.’

The availability of this machine may have led to a craze in consumption of ice cream in the 1850s despite warnings that eating ice in summer was dangerous and a potential cause of illness.

A small cup with a handle was devised for eating ice cream, made from glass or faience. However, by 1760 both Meissen and Sèvres were producing an entire range of porcelain double-handled cups and ice cream pails. Edible cones were first mentioned in French cooking books as early as 1825 and showed how one could roll a cone from ‘little waffles.’ This was much more appetising than the previous paper or metal cones.

Until the invention of the ‘frigidaire’ in the USA in 1915, salt or saltpetre was added to ice to enhance its freezing qualities. Ice cream was served at the great dessert tables of European royalty and American presidents and continues to be a favourite dessert today.