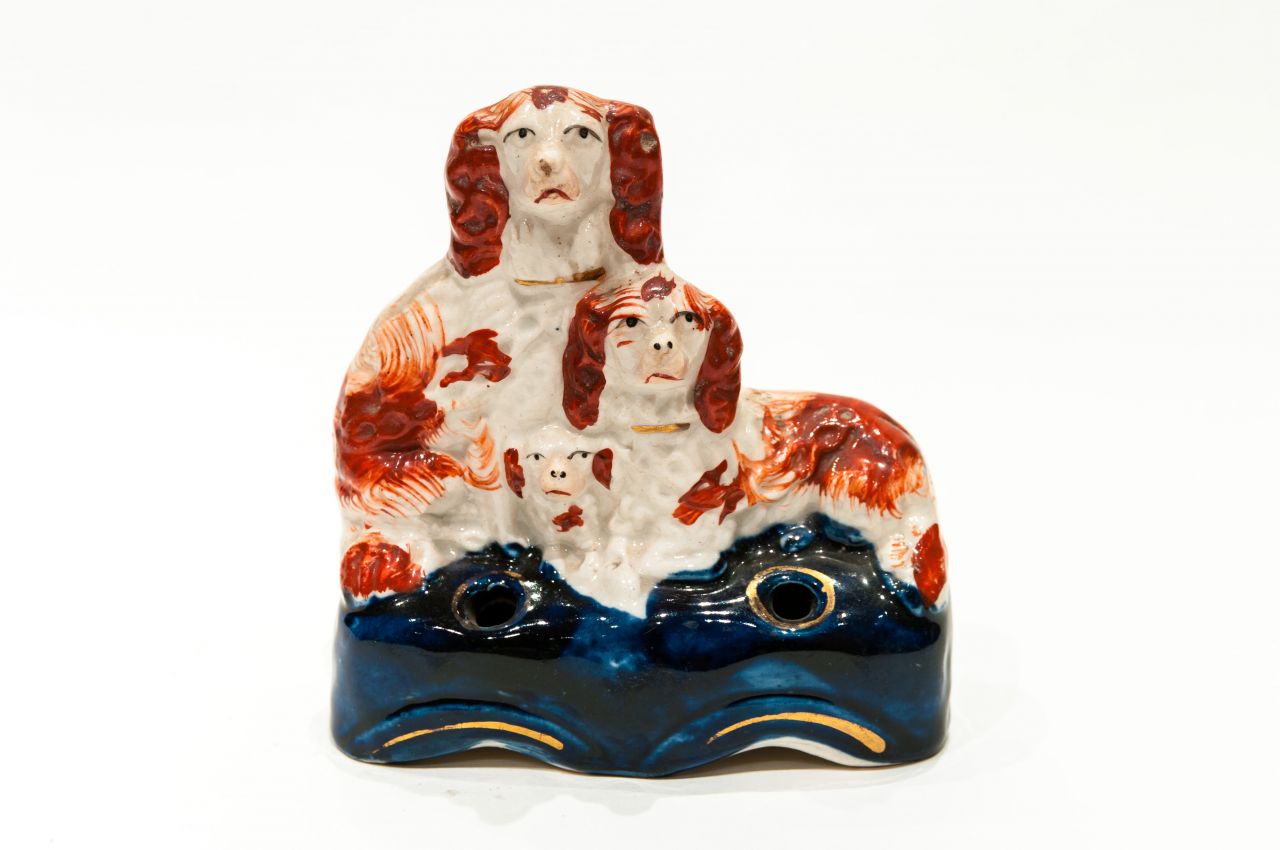 Staffordshire earthenware figures were made mainly in the county of Staffordshire but also in other counties and in Scotland.

The area in Staffordshire around Stoke-on-Trent, known as ‘the potteries’ had an abundance of clay and coal. It made the area ideal for pottery and ceramic production. The subject matter evolved in response to public taste and was produced by a multitude of small manufacturers. Dog figurines were made as far back as the 1700s but the main production of them occurred from 1840 to 1890. Initially targeted at the middle class, by the end of the 19th century they were a coveted item and are still collected more than a century later.

Toy spaniels or comforter dogs, thought to be a cross between a Japanese and Tibetan breed, were common in Tudor times as the pets of the court ladies. Their many roles, apart from companion, included lap warmer, foot warmer and were even favoured for their ability to attract fleas away from their mistress.

When Charles II became king in 1660, he doted so much on ‘the gentle spaniel’ he was seldom seen without two or three at his heels and devoted more time to them than matters of state. He even issued a Royal proclamation, still in effect in England today, that toy spaniels were to be granted entry to any public space in the British Empire, including the Houses of Parliament.

Today they are known as the Cavalier King Charles Spaniel. The first Duke of Marlborough, John Churchill, bred the rusty red and white variety at Blenheim Palace. During the reign of William and Mary, the toy spaniels fell from favour in Royal circles not to return until the 19th century with the advent of queen Victoria and her beloved ‘Dash’, a black and tan toy spaniel. They remained popular throughout her reign.

The 1840 marriage of queen Victoria and Albert, the Prince-Consort, excited the potters’ imagination and production of the spaniel figurines enabled many households to have their own ‘Dash’.

As with other Staffordshire figures, they were cast in plaster moulds in two parts. When sufficiently dry they were removed, allowing two figures per mould per day and maybe three in summer. The two parts were then joined with slip by a ‘repairer’ and were ready for the various firing processes. Between twenty and two hundred dogs were made from each mould with the sharpness of detail deteriorating in later mouldings. The colours were rust red and white, black and white, white and gold and less commonly black. Their sizes ranged from 3” - 30”, sometimes with a base and often in pairs; mostly they were sitting, some with a basket and rarely a smoking pipe. The majority were purely decorative, enhancing a fireplace mantel or windowsill but others were pen or spill holders.