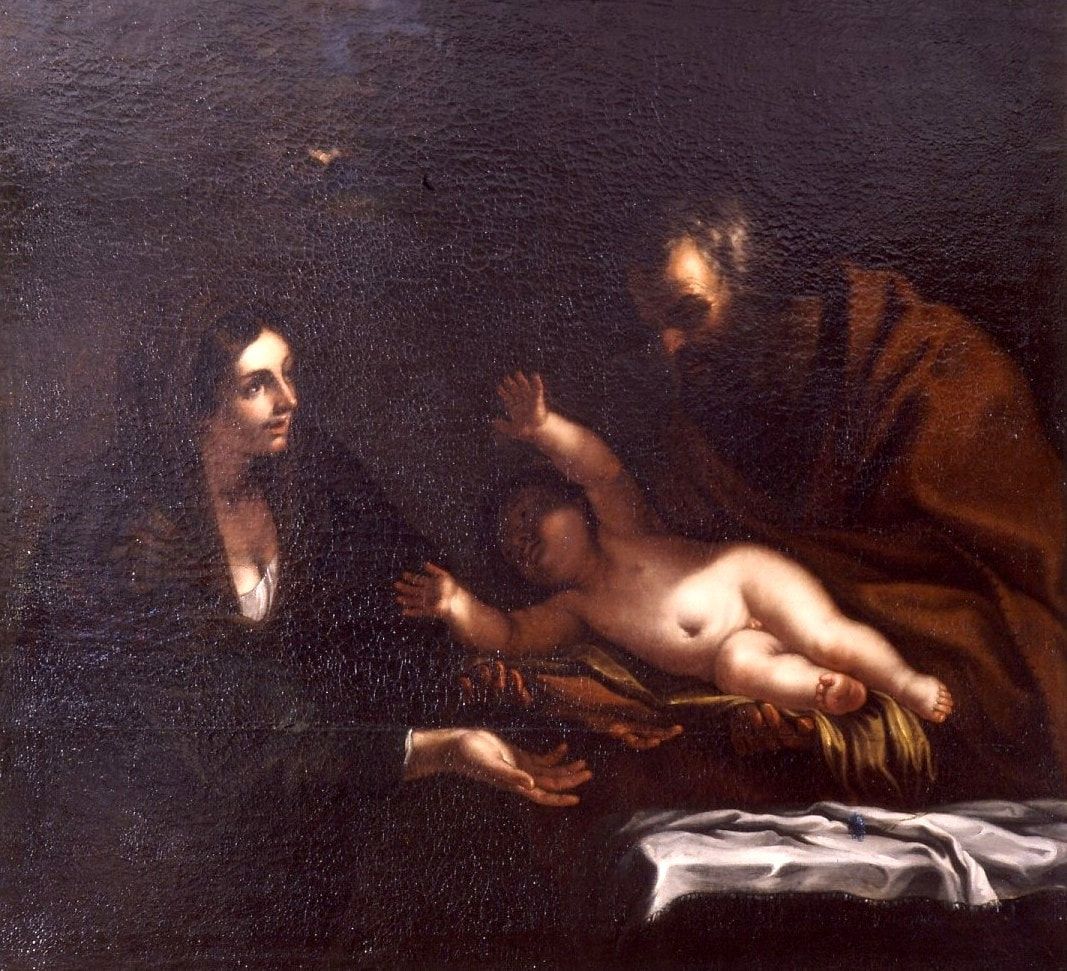 A large and dramatic oil on canvas known as Presentation of Christ Child bears an inscription indicating that it was painted by Pietro da Cortona and dated from around 1635.

This painting intrigues us on many levels. It is in the Baroque style as evidenced by the use of dramatic lighting effects - telling a story in a theatrical manner.

William Johnston purchased the painting (unframed) at an auction in Melbourne, from the collection of Mrs Jeanne Weibenga, a Dutch immigrant. It had arrived in Australia rolled up in a scroll that had damaged the painting. A conservation report noted it was cracked in a typical ‘crocodile’ pattern. A bidding war erupted at the auction, with Mr Johnston outbidding another well-known dealer. It is said that the two dealers never spoke again. Johnston then purchased a frame in France which married perfectly with the painting.

The subject of the painting is The Christ Child being presented by Mary to St Simeon for circumcision. There is some doubt about whether St Simeon actually took part in the circumcision. In the Gospel of St Luke, Jesus is circumcised on the eighth day after his birth. However also according to the Gospel of St Luke, Mary and St Joseph appear to have first met St Simeon on the fortieth day after Christ’s birth when Mary goes to the temple for purification. St Simeon had been promised by God that he would not die until he saw the Messiah. Taking Jesus in his arms, he uttered the prayer Nunc Dimittis, which is still used liturgically in Christian Churches.

[Editors’s note – several artworks combine the subjects of Christ’s circumcision and his presentation to St Simeon. For example, this is also seen in the National Gallery of London’s painting The Circumcision by Luca Signorelli (c. 1490-1491)]. Pietro da Cortona was the quintessential practitioner of the High Baroque style. He was born Pietro Berrettini (1596) but is known by the name of his native town, Cortona.

He studied in Florence and Rome but was essentially a self-taught painter. As a painter, architect and sculptor he often worked simultaneously on architectural and decorative designs.

Whilst carrying out a survey of Italian paintings in Australia, Simona Albanese, independent researcher and curator, investigated this painting. Her research led her to deduce that the Presentation of Christ Child is not a secure painting by da Cortona, but was probably painted by one of his assistants such as Ciro Ferri.

Simona Albanese reached this conclusion by comparing the painting to other works by da Cortona. Albanese pointed out that the “brushworks and the intensity are different from what da Cortona produced in Rome”. Furthermore, until 1639, da Cortona was completing The Triumph of Divine Providence for the ceiling in the Palazzo Barberini in Rome, commissioned by Pope urban VIII in 1632. Albanese believes it is questionable that da Cortona completed Presentation of Christ Child while he was occupied with the Barberini ceiling.

Albanese also reported that an expert team from Rome confirmed that the Presentation of Christ Child was not a secure painting by da Cortona, but was most probably a painting by one of his followers.

The Presentation of Christ Child has many unanswered questions but a wonderfully rich history; worthy of a bidding war to attain!