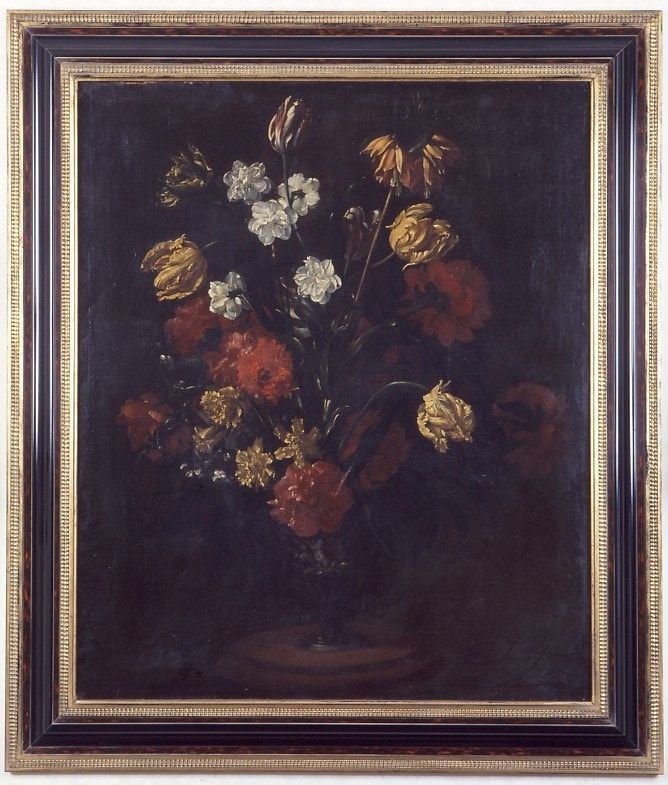 This still life, painted around 1700, is thought to be of the school of Jean Baptise Monnoyer. Monnoyer was born in 1634 in Lille, France but he went to Antwerp where he studied the Dutch still life tradition of painting. He also worked on the decorations of various royal palaces including Versailles and the Louvre, and was invited to England by the Duke of Montagu to help decorate Montagu House, Hampton Court, Kensington Palace and Windsor Castle. The Duke of Montagu remained his principal patron and many of his works are still to be found at Broughton House, Northampshire in England.

We now take for granted an arrangement of tulips, narcissus, carnations and peony flowers, but in the 17th century it was a sign of wealth and opulence. The artist would not have been able to afford a vase of flowers like this and in addition, these flowers would not have been in bloom at the same time. He would have sketched in minute detail each flower at its prime and then painted an imaginary group.

The central axis of this painting extends from the red peony at the bottom to the striped tulip at the top. The arrangement is symmetrical and balanced. Look at the size of the vase in comparison with the height and the weight of the flowers. In real life the vase would topple over. The dark background also accentuates the flowers.

The tulip was introduced into Western Europe from Turkey in the second half of the 16th century. The tulipmania of 1636 is regarded as the first great speculative crisis of modern capitalism, whereby one tulip bulb was worth as much as the cost of a house! Tulips thus became symbols of foolish and covetous behaviour. Peony roses are known for their large and showy blooms, so symbolise voluptuousness, and also because of their short life span, transience.

Here the artist has conquered time as real flowers will wither and die, but painted flowers will last forever.

Peter Coates, Flowers: The Story of Flowers, Plants and Gardens Through the Ages, Peerage Books, 1970.

This article was originally published in Fairhall, Issue 3, July 2011, pp 12.