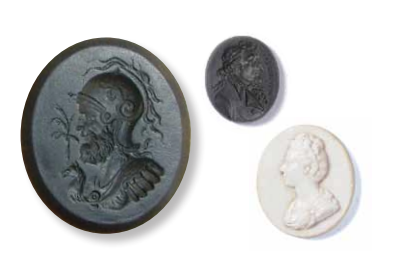 Collectors will be aware of the huge contribution made to the ceramic arts by Josiah Wedgwood but may not have noticed that among the products of his company were some of the smallest and most exquisite items of pottery offered for sale in the past 250 years.

These were the tiny intaglios that were used for sealing letters, for setting into jewellery, for personal adornment as watch fobs and chatelaines or simply collected for their own sake. The intaglios were produced self-shanked or as discs which could be set in gold, silver or pinchbeck, as seals, rings, pins, lockets or other forms of jewellery.

In the late 1760s Wedgwood, the consummate potter, developed a highly refined stoneware which he called black basalt and this proved to be the ideal material for pottery that was to be fashioned in extremely fine detail. In 1769 he had taken into partnership Thomas Bentley, an educated man who moved in cultured circles and who had introduced Wedgwood to the classics. In the latter part of the 18th and into the 19th century, collecting gems, plaques and other ceramic items representing classical mythology, historical events and important figures became something of a fad in Britain. Many English potters responded, and Wedgwood was perhaps the most notable.

By the time Bentley died in 1780 the Wedgwood factory was offering a complete range of monograms (or ciphers) that could be used as personal seals together with over 400 different intaglios. The latter included depictions of events and figures from Greek and Roman mythology and a large range of modern subjects such as the Kings and Queens of England, all the Popes, philosophers, physicians and poets. Production continued until the neo-classical period had run its race in the early 19th century.

These tiny items ranged from less than 1 cm to over 3 cm in diameter. Because basalt was such a dense material it took a polish or developed a patina with use, thus enhancing its beauty and making the intaglios more attractive to discriminating buyers. Some were given a blue wash in slip so that the incised figure would be black and the ground (or surface) of the item blue, in imitation of blue-black onyx. Like most Wedgwood production, the disc intaglios carried an impressed Wedgwood or Wedgwood and Bentley (or simply W&B if too small) mark, plus a catalogue number on the reverse. The self-shanked seals were normally not marked, nor were the rather rare double-sided disc intaglios.

Wedgwood found designs and heads for his intaglios from a wide variety of sources. Many were based on antique gems, contemporary portraits, medals and classical artworks. In each case the master cameo would be modelled by the most skilful artisans Wedgwood was able to employ, and then impressed in intaglio form into the ceramic material. Intaglios were among Wedgwood’s most popular products. In the mid-1770s they were sold individually at a shilling each, or could be bought in sets. If you were rich enough and had a sufficiently developed ego you could have your portrait modelled by one of Wedgwood’s artisans and replicated as an intaglio; but that would have cost a good deal more.

Although basalt was the most appropriate ceramic body for the intaglios, by 1775 Wedgwood had perfected a new semi-translucent body he called jasper and this was also progressively introduced into production, including intaglios. Compared with basalt, very few jasper intaglios find their way into the antiques market today so it appears that, understandably, they were never as popular as the fine basalt material so admired by collectors of these tiny, exquisite objects.