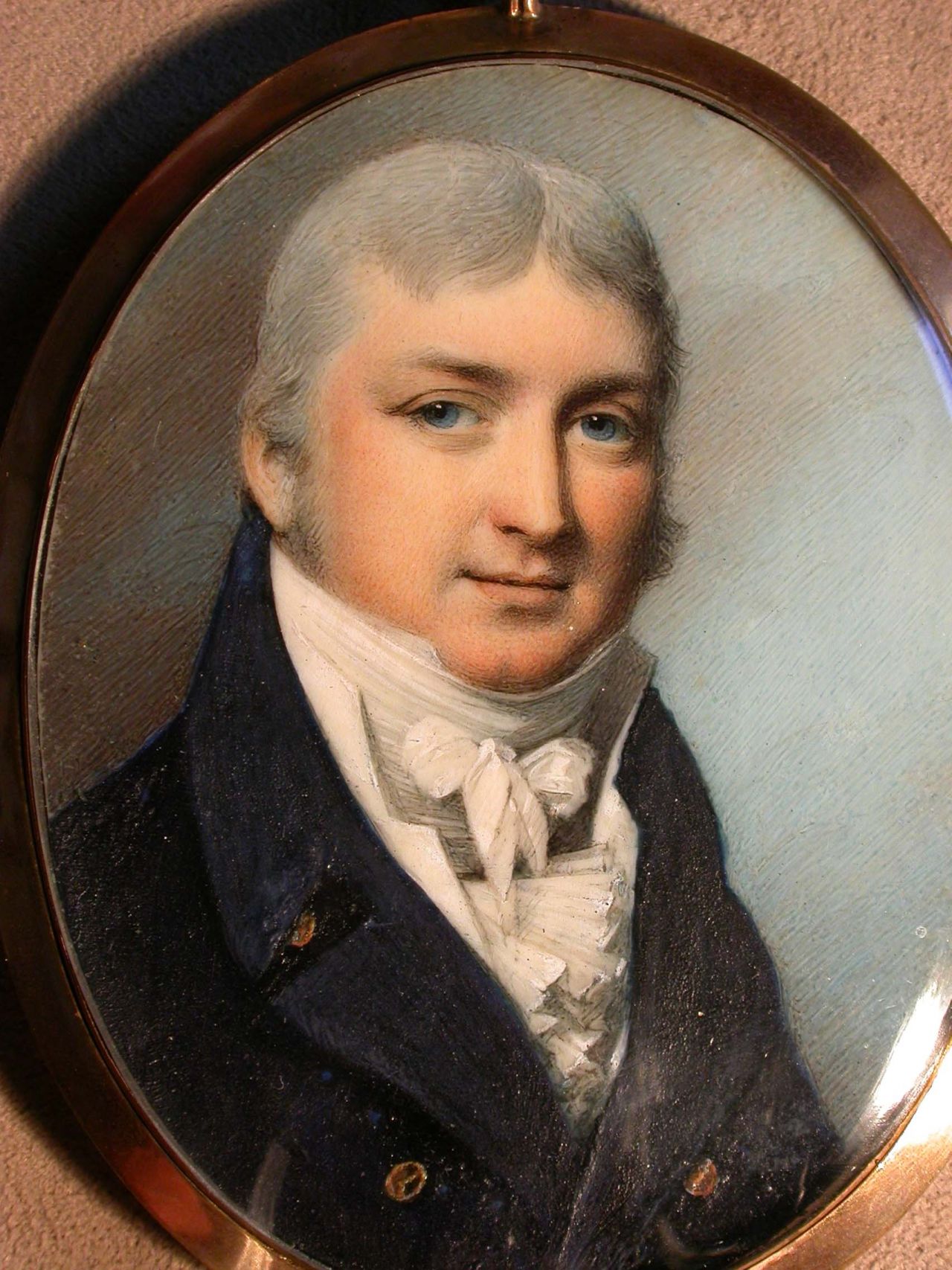 George Engleheart was born in 1750 in Britain. His father, Francis, who was German-born, was a plaster modeller. The young George did not set out to be a miniaturist. He studied under George 13arret, R.A., painting watercolour landscapes, then joined the studio of Sir Joshua Reynolds where he copied Reynolds' work in miniature to practise painting portraits.

This copying of other artists' work was the usual way for an artist to gain experience, and `copies' often come up for sale. Besides the copies that apprentice artists made of other people's work, there were also copies legitimately made by the original artist, where a client had requested additional versions of a Miniature. then there are the copies that other artists made, which would be acknowledged on the reverse of the work as, for example, ‘after Richard Cosway'. Finally, there are the copies we all despise, where a very strange-looking rendition of a little masterpiece-often in a frame made up of old piano keys, always `signed', and often of a famous sitter-is passed off as 'original' and genuine.

George Engleheart was very hardworking and well-organised. Unlike sonic artists he kept a fee book from 1775, when he set up in practice on his own, until 1813 when he retired. He married three times during his long life. His first wife was Elizabeth Brown, whom he married on 10 February 1775. She died, and he then married her sister, Ursula Sarah Brown, on 17 May 1781. Finally, on his second wife's death, he married Elizabeth Isaac in 18O . This was not unusual, as most people did not live long lives in the Georgian period.

During an exceptionally productive career that lasted 39 years, Engleheart painted 4,853 miniatures, an average of 124 a year, or two a week. The time it takes to paint a miniature is fairly well documented and is typically around 35 hours for a head and shoulders portrait. However, like all craftsmen, some are fast workers and others are slow. Some like to give extra value for money and others offer only basic fare. Some experiment and others never do. Although Engleheart kept fairly closely to his basic style of painting during his long career and also maintained a very high standard for most of it, there are three distinct eras that evolved, which showed that he was prepared to experiment a little.

The colours he used in his miniatures were quite subdued and restricted mainly to the blues / greys / blacks which give them an almost monochrome look, rather like black and white photography. He was obviously a quick and efficient worker and unlike other artists, he was prepared to paint what he saw. This is always a tricky area for artists, as payment is not usually made until after the work is completed and one may ask whether clients really like to be confronted with their own facial shortcomings? to have them immortalised for ever? And to pay for that? Artists would have been well known for their style and their customers would have chosen accordingly, rather like the society and fashion photographers of today. If one is snapped by the magazine Hello, the picture will as likely be a flattering shot with nice things said. If the photographer is front the Enquirer, the bottom will definitely look big!

Engleheart had a remarkable eye and produced bold images using extraordinary shadows on the face. Sometimes the thick shadow, cast down the line of the nose and under the tip, looks so huge as to be caricature, yet remarkably, when compared with a black and white photograph of today, it is astonishingly accurate. As our comparison, we used a recent copy of a black and white photograph by the wonderful present-day photographer, David Bailey.the shadowing seen on the photograph and that in the Engleheart portrait were almost identical. Engleheart did not bother with fripperies. Despite his training in landscape painting, he did not paint elaborate backgrounds to his portraits, nor did he spend a lot of time painting clothes. What he offered was a truthful, straightforward head and shoulders portrait, and throughout his lifetime this earned him a handsome and regular income which he wisely invested in London property.

Many of Engleheart's works are unsigned. When he did sign, he used a cursive `e' on the froont, as he has in the miniature of Sir John Green. In his first five years of setting up his own practice (1775-1780) he worked in the `modest' style. During the next period (1780-1791 approximately) he painted 2,172 works, developing his middle style, where lie portrayed both men and women with huge, deep-set eyes, and perfecting the shadowed look that became his trademark. This was also the time when he painted many of his women sitters wearing wide brimmed hats. His busiest year was 1788 when he painted 228 miniatures, earning 4~2,200, a fortune in those days. His prices during that year ranged from 8 to 10 guineas.

On the death of his friend and fellow artist, Jeremiah Meyer, in 1789, he succeeded him in 1790 as appointed Miniature Painter to King George III. From then on Engleheart, like many other artists, adopted the larger ivory and we see works of 7.5 cm high and more, like the two miniatures illustrated here. with the turn of the 19th century, the rectangular format became popular and Engleheart used it too. Many people feel that front this point the art of miniature painting lost something as the miniatures became so big that they could no longer be worn on the person. George Engleheart finally retired in 1813, but continued to accept a few commissions. He died in 1820, nearly 80 years old.