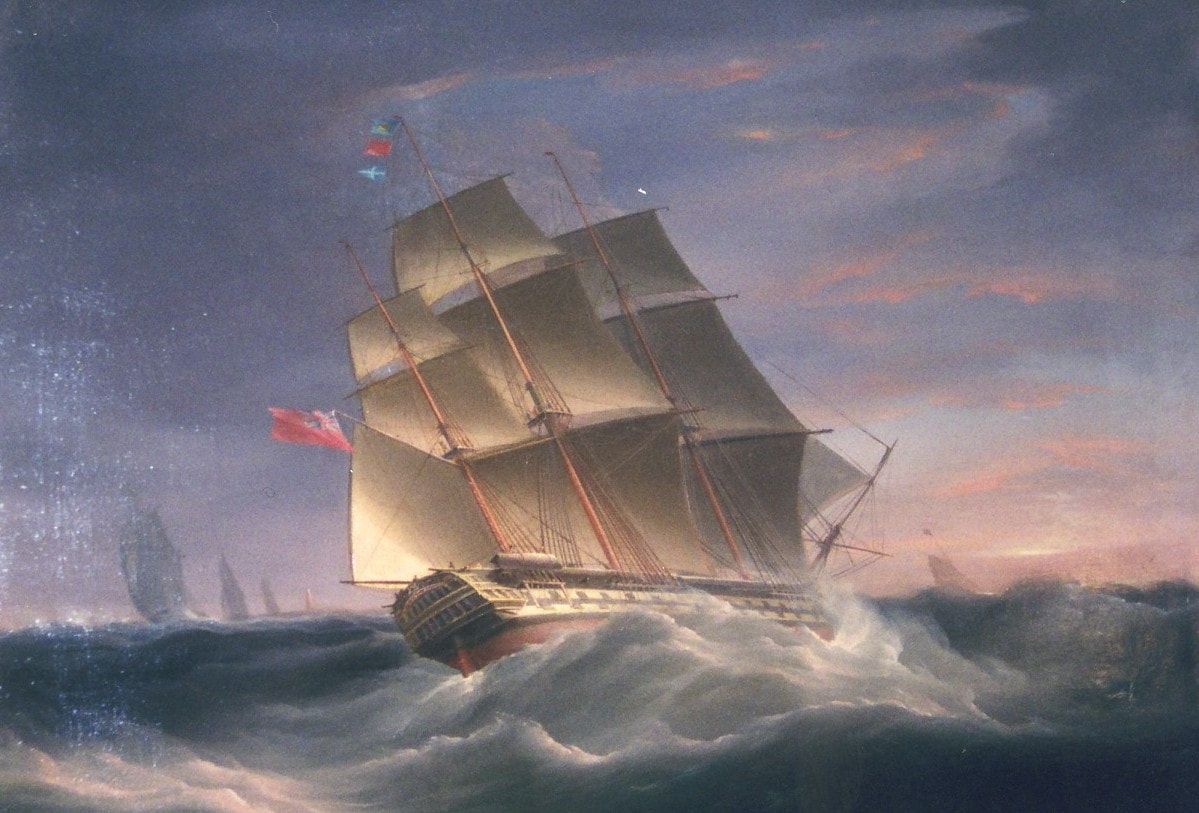 The tradition of maritime painting really began in Holland in the 16th and 17th centuries.

Most notable of the Dutch artists who influenced the British marine art tradition were Willem van de Velde the Elder (circa 1611–1693) and his son the Younger. Willem van de Velde the Younger (1633–1707) was especially admired and thus influential in England, where he lived and worked for thirty-five years. The methods developed by the Dutch to successfully depict some of the sea’s more elusive features (light and shadow, or the reflection of the sky over the ocean’s uneven surface, for example) were adopted by British artists as they founded their own marine art tradition. Knowledge of Dutch methods of marine painting was considered so fundamental to a successful marine painting education that it was likened to ‘grammar school’ for the British marine artist.

British marine paintings can be divided into three main categories: ship portraits, paintings of ships at sea, and inshore, coastal and harbour scenes.

Ship portraits were immensely popular before and throughout the Romantic era. They were, as apparent by the name, focused entirely on the ship, rather than on the surrounding sea, although the best known of the ship portraitists strove to carry the accuracy of their drawings out into the atmosphere surrounding the ship (sky, sea, coastlines etc.). Accuracy in all the details of the ship was of the utmost importance in ship portraits.

Paintings of ships at sea fell into two categories: large, full-rigged vessels (such as naval vessels), and of smaller vessels. The former had more prestige and were more expensive, while the latter were much easier to come by and generally cheaper.

Our painting untitled (Frigate at sea - Dutch East India Company Ship), by William Huggins could be described as a ship at sea.

William Johnston obviously had an admiration for maritime paintings. While residing in London, he took premises in Greenwich – within sight of the grand British tea clipper the Cutty Sark. (It is good to note here that the Cutty Sark has just been reopened to the public by the Queen, five years after the 19th century ship was ravaged by fire).

The painter William Huggins (1781-1845) first learned about ships and the sea by serving as a steward with the British East India Company. In 1814, he returned to London and became a full time marine artist. As a result of his great ability, King William IV named him official marine painter to the Court in 1836. His works were eagerly sought by the public and he was well known and popular throughout his career. A highly prolific artist, Huggins painted detailed ship portraits and maritime scenes, thus providing an important record of British maritime activity in the early 19th century.

Huggins exhibited at the Royal Academy, as well as the Suffolk Street Galleries. A large number of his paintings were made into lithographs. The National Maritime Museum in London holds a pair of Huggins paintings of the Battle of Trafalgar that have been favourably compared to the famous rendering by Turner.

This article was originally published in Fairhall, Issue 6, July 2012, pp 13.