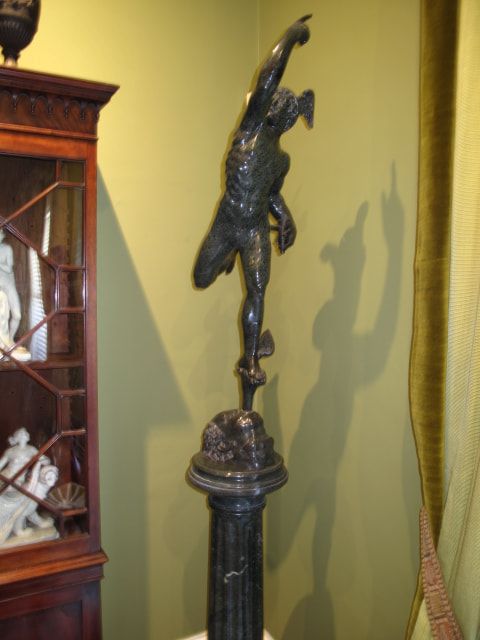 Giovanni Bologna (1529–1608), a Flemish artist working in the Medici court of the Grand Duke Cosimo I in Florence, created four distinctly different bronze sculptures of Mercury, each version more refined than the preceding one. Composing his subject in the figure of a serpentine, or, ascending corkscrew arrangement, Bologna forces the viewer’s eye to travel both over and around the sculpture.

The Museum’s Mercury statue reproduces one of Bologna’s later models, in which form and attitude combine to achieve a lightness and grace of movement that seems to defy gravity. Mercury is depicted with the typical winged feet, gliding through space. In his left hand is the caduceus, a wand carried by ancient Greek heralds as a symbol of unity during war, a form of two snakes intertwined about an olive branch that is capped by wings.

The Museum's reproduction is possibly made from a mould of the original statue Flying Mercury created by Giovanni Bologna. The son of Jupiter and the messenger of the gods. Mercury was worshipped in Roman times as the god of traders and merchants, and his popularity spread with the extension of Roman power, influence, and trade.

The Museum's reproduction is possibly made from a mould of the original statue Flying Mercury created by Giovanni Bologna the wind supporting Mercury A kind of Mannerist "joke," Mercury's flight is supported by the wind.  The most celebrated sculpture by Giambologna is the Mercury, known in four versions whose chronology is uncertain. His first design, a heavy wingless figure, is preserved in a model in Bologna.

When Giambologna returned to Florence, he referred to his earlier work in a second version, a flying Mercury, now lost or identical to one in Vienna. This bronze was send by Cosimo as a diplomatic gift to the Holy Roman Emperor Maximillian II, when they were negotiating the marriage of Maximilian's sister Giovanna to Francesco de' Medici.

The messenger god was Maximilian's protector and the pose was based on a medal of Maximilian by Leone Leoni (1551).  The fourth, a flying variant in Florence (shown in the picture) was completed by 1580, when it became a fountain figure at the Villa Medici, Rome. Mercury balances on a bronze column of air issuing from the mouth of Zephyr, over which flowed water, increasing the illusion that he was floating.

The work shows a study of Verrocchio's Putto and dolphin and Rusitici's Mercury, both for the Medici and is indebted to the Mercury on the base of Cellini's Perseus but has more dynamism. The god assumes an arabesque, balanced precariously on his toes, and points upward to Jupiter. It is Mannerist in that it can be appreciated from all angles and is elongated and elegant; yet these features contrast with its amazing physicality and an evident study of weights and balances. The precocity of "Maniera" is blended with what became Baroque illusionism and the freedom derived from wax.