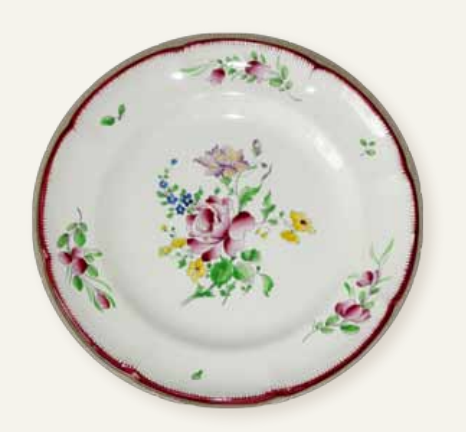 Late at night, when all is quiet at home, I sometimes catch myself staring at a faience pot in a nearby cabinet. The hand-painting of the flowers on this pot is nowhere near the calibre of Sèvres (or Meissen) but is lovely in its details and quaint charm.

Faience is the French equivalent of Dutch or English delft and Italian majolica. It started in the 17th century with wares made for the nobility. The floral designs are usually bouquets with tulips, roses or peonies but many of the other flowers are stylized. Early faience can rarely be seen these days except in museums.

Fortunately, I visited the Palais Rohan in Strasbourg that held the key to understanding my interest in floral faience. There displayed was wall after wall of floral faience from the Strasbourg factory, whose noted artists were from the Hannong family in the 18th century. Throughout the region of Lorraine, factories like Lunéville, which still exists, and Sarreguemines (whose reputation was enhanced by artists like Gallé), which has closed, decorated their wares with this style of floral painting.

From a shop in the tourist town of Riquewihr, 60 km from Strasbourg, I had to have a plate that was totally painted by hand: the front had a rose bouquet and the back had the words painted in the same dark pink (almost burgundy) colour that rimmed the plate: St. Clément France Peint Main cL.

At an Auer Dult, a Munich flea market, I spotted a stack of plates whose floral pattern caught my eye. They were all chipped, yet I bought ten of them. Those plates were hung on my kitchen wall, five on either side of the archway leading to the dining room. Only last month, I researched the maker’s mark; they were from Zell am Harmersbach, a small town in the Bavarian Black Forest region, close to the French border. Below the maker’s mark are the words ‘Alt Strassburg’ (Old Strasbourg). It all makes sense now.

This article was originally published in fairhall, issue 5, March 2012, pp 19.