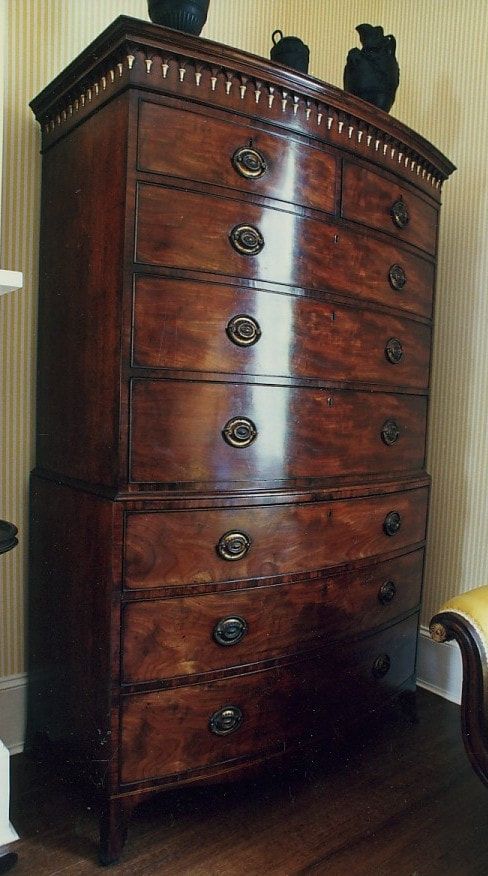 The Fairhall house-museum tour commencing in July will be arranged by the fashion house Romance Was Born. In anticipation, it would be interesting to consider the development of clothing storage over the centuries with particular reference to pieces in the Collection.

Early English storage furniture was simple - a chest, simply made, usually with a lock. Embellishment on the chest reflected the cost of the item and the status of its owner. In large households, a personal chest was essential for security and privacy. It was a versatile item, often used as room furniture but portable enough to serve as luggage too.

The shifting of economic focus over the centuries from subsistence to trade led to the availability of a wider variety of goods than ever before. The accessibility of textiles meant that clothing, though still expensive, became more obtainable. Then, as now, it served as an indicator of wealth and status as well as proclaiming one’s ability to keep abreast of the latest fashion from the continent.

Two centuries or so later we arrive at the chest-on-chest, an example of which stands in the bedroom at Fairhall. Mahogany, with brass plates and handles, this George III chest is topped by a carved pediment finished in ivory. Providing a more sophisticated storage system, this style of chest could be divided to allow for easy travel. The problem of accessibility to the top drawers was solved by the use of bed steps, also used to climb into the high beds that were in general use. In time, the chest-on-chest fell out of favour, to be overtaken by the wardrobe.

Although wardrobes were in use from the late 18th century, coat hangers appear to have been unknown until the very end of the 19th century. Clothes were hung on pegs or hooks around the inside of the wardrobe or laid flat in drawers or shelves. Clothesholders or clothes-shoulders began to be advertised in

the late 1890s as an innovative way of hanging clothes and maintaining their shape.

The Collection’s late 19th century wardrobe displaying both Classical and Regency revival elements, is made of satinwood or possibly maple veneer. It has five sections, incorporating hooks, hanging rails and drawers. Complementing the fine veneer are four columns with Egyptian-inspired lotus or papyrus leaf decoration. A central full length mirror, another innovation, carved pediment and solid plinth enhance the classical revival piece. No maker has been identified - the only positive attribution relates to the hinges stamped ‘Ching and Co.’ a firm operating in Birmingham in the 19th century. Similarly marked hinges on furniture by Gillows, has led to speculation that the piece may be attributed to this prestigious English furniture maker.

Today, the traditional forms of storage have given way to the practicality of built-in closets and walk-in robes which, while practical, somehow lack the romance and warmth of the old. Incorporating both in sympathetic modern design seems the ideal solution – honouring the traditional while embracing innovation, a familiar principle at The Johnston Collection and one that is embraced in the new tour The Bride, The Ship and The Wardrobe.

This article was originally published in Fairhall, Issue 6, July 2012, pp 8.