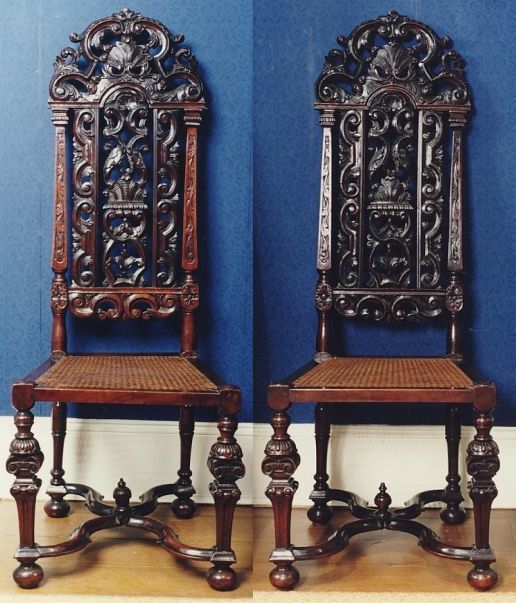 Daniel Marot (1661–1752), a Huguenot, was a man of many talents: architect, decorator, landscape gardener and designer in a variety of crafts, including metalwork.

His father was an architect and engraver in Paris, but when Louis IV revoked the Edict of Nantes in 1685 thus depriving Protestants of religious and civic rights, the family left France and settled in Holland.

Marot brought with him the opulent and elaborate designs associated with the French Court and was employed by William of Orange, later William III of England, as architect and furniture maker. He decorated many Dutch country houses, but also designed chambers, apartments and gardens for William, (Het Loo Palace and the great hall of audience for the States-General at the Hague). Marot eventually accompanying William to London where he became one of his architects and Master of Works.

At Hampton Court Palace he designed garden parterres, a Chinese cabinet room and many of the apartments with furniture and other furnishings, including mirrors, gueridons and state beds.

The pair of William and Mary Oak and Walnut, highbacked chairs in The Johnston Collection have been dated as late 17th or early 18th century. (Editors Note: we date them as 19th century). They have cane seats, pierced backs and crest rails, with ornate cup and scroll legs to front. The ‘X’ shaped stretchers are surmounted by a central finial and the legs have bun feet.

Marot’s style has been called decorative baroque, a feature of which is the carved and pierced work as seen on the backs of these chairs.

Marot had a powerful influence on late Stuart furniture styles. He returned to Holland after William’s death, and in 1712 in Amsterdam, he published the folio volume of his furniture designs. The designs reveal the influences of his period in France and Holland. He died in 1752.

NOTE: The Encyclopaedia of Antiques, with an introduction by Arthur Negus, published Octopus, London 1976 states that Marot published his engraved designs, first in parts, and then altogether in 1702 under the title Oeuvres du Sieur D. Marot, architecte du Guillaume III, roy de la Grande Bretagne. in the style of Daniel Marot (1661–1752) worked in England (1694-1698)