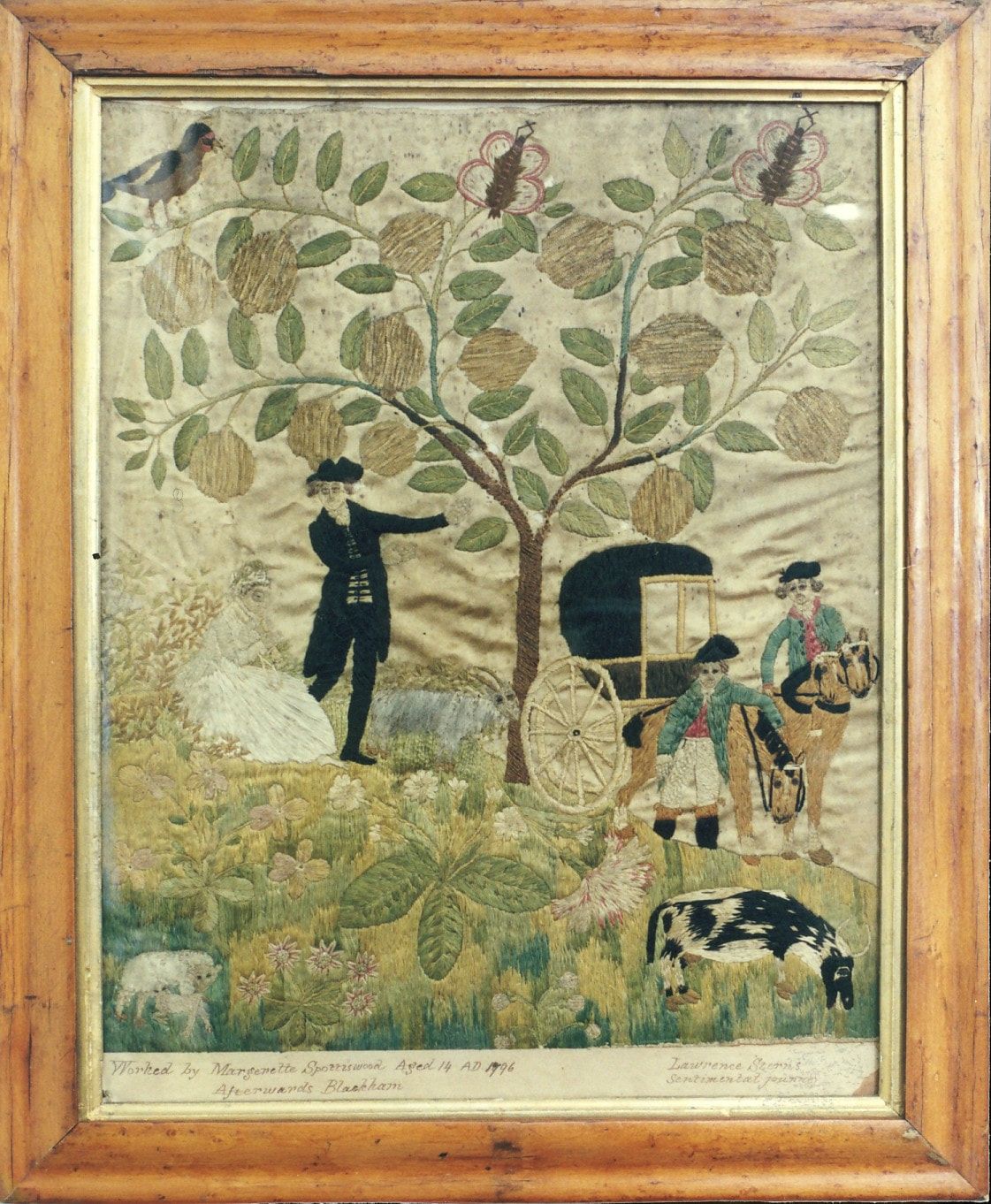 The embroidery by Margerette Spottiswood that featured in the exhibition Oh Do Grow Up… and was the cover page in the last edition of Fairhall, is also displayed in Fairhall during the current tour.

It was worked by Spottiswood when she was 14 years old in 1796. In the bottom right-hand corner she references Lawrence Sterne's Sentimental Journey published in 1795. It is reasonable to suggest that she had read his account of a gentleman, named Yorick, travelling through France and Italy, because her sampler portrays a scene from the book: Maria dressed in white, is sitting under a tree, playing her pipe with her pet goat next to her. (Actually, when the encounter with Yorick occurs, the goat has died and been replaced by Sylvio, the dog but I think we can allow Margerette some artistic licence.) Close by are Yorick‟s chaise with the postillion astride the left horse and his resourceful manservant, La Fleur. However, Yorick walks with Maria and the dog the short distance to Moulines where her widowed mother lives.

Sterne's Sentimental Journey falls under the genre of Sentimentalism which exemplified an emotive perception of and response to people and situations, ranging from melancholy to optimism. For example, Yorick discovers he left Dover, without a passport. There is a danger he will be thrown into the Bastille which he convinces himself will be akin to home confinement because he can purchase food, pen, ink and paper while incarcerated. However, the sight of a caged starling leads him to contemplate the misery of captivity, so he decides to try and get a passport through a French acquaintance, a duke at the court in Versailles. By the end of the 18th century this literary genre was falling out of favour.

Dorothy Morgan, guest curator of the exhibition-house tour Fair Hall to Glad Parlour: The Flower, Its Beauty & Meaning in Art & Ornament also writes about this embroidery:

The flowers in the embroidery are interesting from several points of view. The figures, animals and lemon tree are largely to scale. However, the two birds, the butterfly and the flowers are larger than one might expect. The pansy, primrose, daisy and clover are represented in a manner often found in old herbals and even in medieval tapestries, growing vertically out of the ground, occupying a circular or oval space with spread leaves filling the bottom half and the flower heads (and sometimes buds) describing the arc of the top of the oval. The complete clumps of the pansy, primrose and daisy are shown, while only the clover flowers peep above the bottom of the composition. By contrast the much larger carnation is shown as a single flower head on its stem lying almost horizontally on the grass, almost as if plucked from its bush or a bouquet and flung carelessly on the ground.

Why this difference? One possible answer might be that the first four were common field or hedgerow flowers that might be found growing, as in this example, in many parts of the countryside. The carnation, however, was one of the popular „florist‟ flowers of the 18th century. The term „florist‟ was originally used as early as the 17th century to describe plantsmen who grew and bred plants for the beauty of their flowers rather than simply for their medicinal, culinary or other useful properties - it was only towards the end of the 19th century that the word took on the meaning we understand today. Thus Margerette may have known carnations as highly bred and therefore prized flowers to be admired, picked and displayed, whereas the other simpler flowers were literally part of the landscape.

This embroidery was probably purchased as a design printed onto its silk ground. However, whether designed commercially or by Margerette herself it is entirely possible that the choice of flowers was deliberate and considered. Every flower had a particular meaning which everyone understood, so even complex and subtle messages could be conveyed in the particular arrangement of flowers in a bouquet or painting. A pansy meant „you occupy my thoughts, think of me‟. The primrose signified modest worth, silent love, early youth and „I cannot live without you‟. The daisy could have a number of meanings depending on variety and colour: if white it means innocence, loyal love and purity, however this particular flower, with its touches of red or dark pink appears to be a single field daisy signifying „I will think of it‟. Again the meaning of clover depends on its colour: purple for providence, red for industry, while a four leaf clover signifies „be mine‟.

The five flower heads embroidered by Spottiswood appear to be white, even allowing for some fading of the original colours, and thus signify "I promise" or "think of me". Generally carnations indicated pure and deep love, pride and beauty, or fascination, although again each colour also had its own significance, the pink of this particular bloom sending the message „I'll never forget you‟.

So perhaps there is a hidden message in this embroidery. Margerette may be saying "I'll never forget you, I cannot live without you, think of me".

VISIT Oh Do Grow Up…