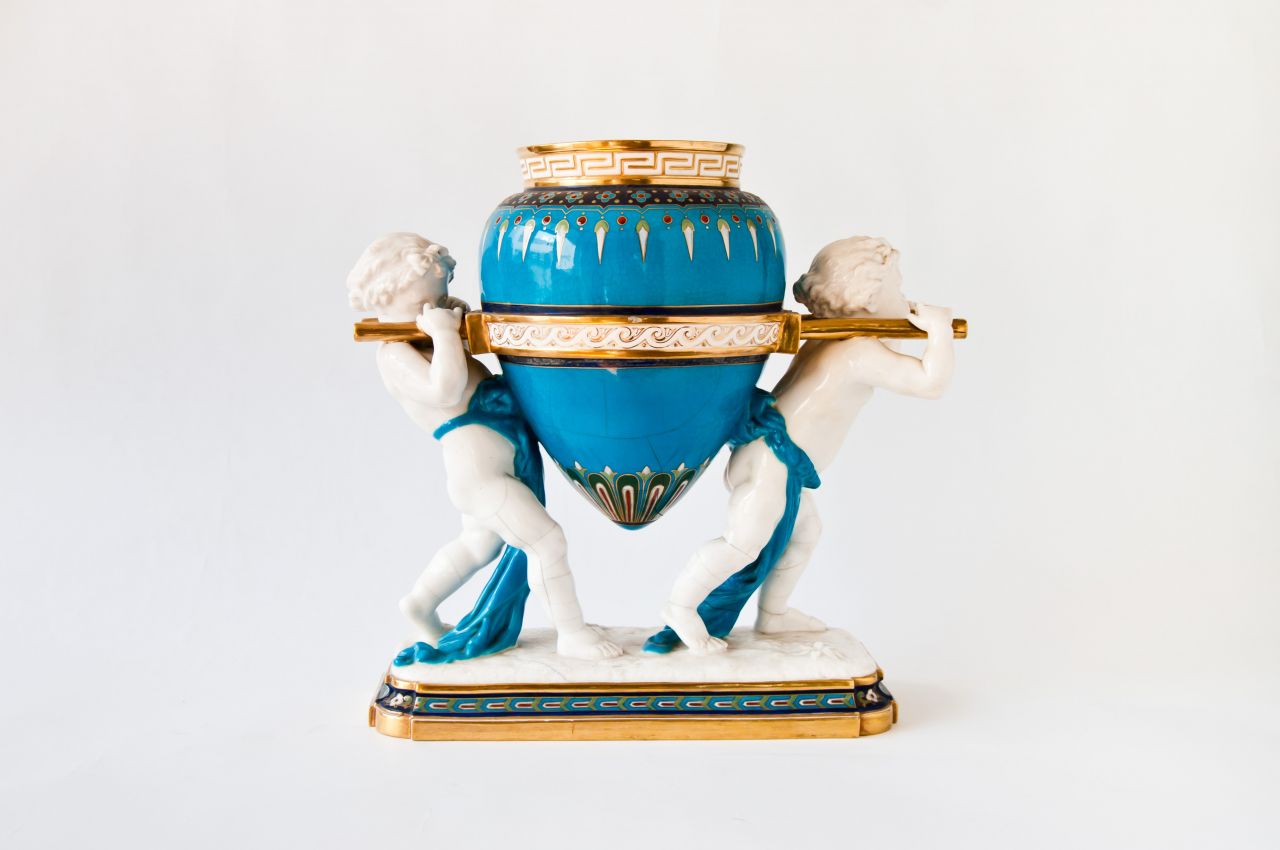 This piece, with Minton and Co. characteristics, bears a ‘Dresseresque’ design on a bleu-celeste ground, and is supported by putti from a line of Minton figures made in Parian, majolica, or bone china. Unusually without a Minton mark or date code; an identically constructed piece with a mark Mintons 1517 and a date code 1881 is illustrated in Cecil’s book.

The vase is decorated in Chinese cloisonné style enamel,with bands of differing decorative motifs featured against a bleu-celeste background. The neck features a gilded Chinese key motif, while immediately below a stylized floral band can be likened to Chinese embroidery, with which Dresser was familiar. The shoulder of the vase is adorned with a ‘Dresseresque’ Egyptian style abstracted botanical motif. It features elongated lotus-like buds in green and white, alternating with raised crimson dots. The shapes are both surrounded and connected by delicate lines of gilding. The same motif appears on a pair of blue Minton vases dated 1869 attributed to Christopher Dresser, on display as part of the Robert Wilson collection at the NGV. Smaller Egyptian style flower buds decorate the bottom of the vase, alternating with a geometric pattern which is repeated on the rim of the rectangular base.

At the midway point a Vitruvian scroll in gold and white encircles the vase. Gilded rods protrude from the body of the vase at either side and extend over the shoulders of the putti holding the vase aloft. With their plain white glaze and trailing drapes these figures are similar to models used for Minton majolica ‘revivalist’ ware. Although majolica ware had enjoyed enormous success since its introduction in 1850, by the 1880s Minton had reduced its output because of competition from cheaper products both from England and Europe.

The shape of the vase in The Johnston Collection seems to reflect Dresser’s view that the ovoid shape and the ‘subtlety’ of the elliptical line is particularly pleasing. A coloured drawing attributed to Dresser and exhibited by Minton at the 1862 London International Exhibition, depicts an elongated ‘Chinese bottle’ adorvned with a simple version of the decorative motif featured on the more compact Johnston vase. The rounded bottom of the Johnston vase can also be compared to illustrations in Dresser’s book of Egyptian and Chinese water bottles, although the latter generally have a narrowed neck.

In 1848, Herbert Minton acquired the services of Leon Arnoux from Sevres, with the aim of making ornamental wares for the luxury market. Arnoux, a modeler and designer, brought with him his knowledge of new glazes and the vibrant ground colours associated with Sevres. He also introduced Majolica ware, a body previously unknown in England. The Great Exhibition of 1851 was a triumph for Minton, where an elaborate dessert service was bought by Queen Victoria. It combined bone china with Parian ‘allegorical’ figure supports, some in the form of Renaissance ‘revival’ della Robbia-like putti.

Herbert Minton was a supporter of the Design Reform Movement, established in 1835 to improve the quality of British design, with training based on historical styles. Staff employed by Minton were encouraged to visit museums, and were given access to important private collections. Minton also employed independent designers, the most famous being Christopher Dresser with whom they were associated from about 1862. Trained as a botanist, Dresser attended the School of Design, establishing himself as an independent designer. He made his services and those of his workshop available to a variety of manufacturers, providing advice and designs for ceramics, metal ware, textiles, wallpaper and carpets.

In his book Principles of Decorative Design published in 1870, Dresser also encouraged students to visit museums and galleries. He wrote of the importance of geometry and repetition and the ‘idealisation’ of botanical forms, and expressed his admiration for the decorative styles of the East, especially China and Japan, as well as those of ancient Egypt and Greece.9 Much of his writing reflects the philosophy of his mentor Owen Jones, whose Grammar of Ornament published in 1856,10 included a colour plate by Dresser depicting both naturalistic and stylised botanical drawings.11 Dresser, however, stated that all Renaissance ornament ‘repels and chills me’,12 the antithesis of the putti strategically placed in the Johnston piece.

It is evident that Minton combined two disparate styles to make a piece that would appeal to the Victorian taste for ‘exoticism’, with the buyer perhaps reassured that his or her purchase was in ‘good taste’. It is unlikely that Dresser himself would have been similarly reassured by the mix in styles.

We are grateful to Dr Matthew Martin, Assistant Curator –

of Victoria, who generously shared his time and expertise.

This article was originally published in fairhall, Issue 4, November 2011, pp 16.