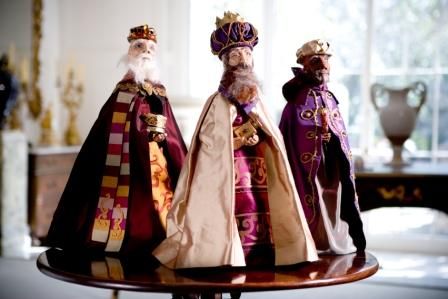 65 contemporary artisans, from Castlemaine have collaborated to interpret antique furniture and the decorative arts for a Christmas exhibition at the Johnston Collection, a private museum in East Melbourne. The exhibition titled Christmas: A Colourful Canvas celebrates the diversity of craft from the Castlemaine region in northern Victoria.
Each year the Johnston Collection hosts an exhibition to coincide with the festive season. This year Castlemaine craftspeople covering numerous disciplines were asked to reference objects from the Collection working with the theme A Day in the Life of Mr. Johnston.

William Johnston (1911- 1986) was a notable and enigmatic antiques collector with a taste for the finer things in life. Inspired by historic English country houses, he wanted his substantial collection to be available for public view and appreciation after his death. Johnston established a charitable trust to ensure a small house museum could operate after his death thereby preserving his treasures.

The museum houses some wonderful objects, all of which can be viewed in situ at the East Melbourne mansion. The house has been configured to give the feeling that Mr. Johnston is still in residence and it this concept that the Castlemaine artists have explored to create masterful works for the show.

“This year I approached artists from Castlemaine with the view to promote creative disciplines that are to a large extent undervalued by the general public”, says Nina Stanton, curator and director of the Johnston Collection. “I wanted to highlight the diversity of contemporary and traditional craft and bring it to the forefront of peoples’ minds so they realise creativity takes on many forms”, adds Stanton.

The most striking element of the show is undoubtedly attention to detail. Painstaking effort and countless hours have been applied to interpret some of the fascinating objects from Mr Johnston’s collection.
An oriental urn in deep blues and greens is the inspiration behind a wonderful quilted jacket created for Mr. Johnston to wear; the intricately carved headboard of Mr Johnson’s four poster bed has been referenced in embroidered bed linen; Wallpaper in the Yellow Room has been the catalyst for the design of hand printed placemats on an expansive dining table.

Christmas: A Colourful Canvas will run until the end of February. A visit to the museum will inspire budding craftspeople and those with a passion for all things Christmas.