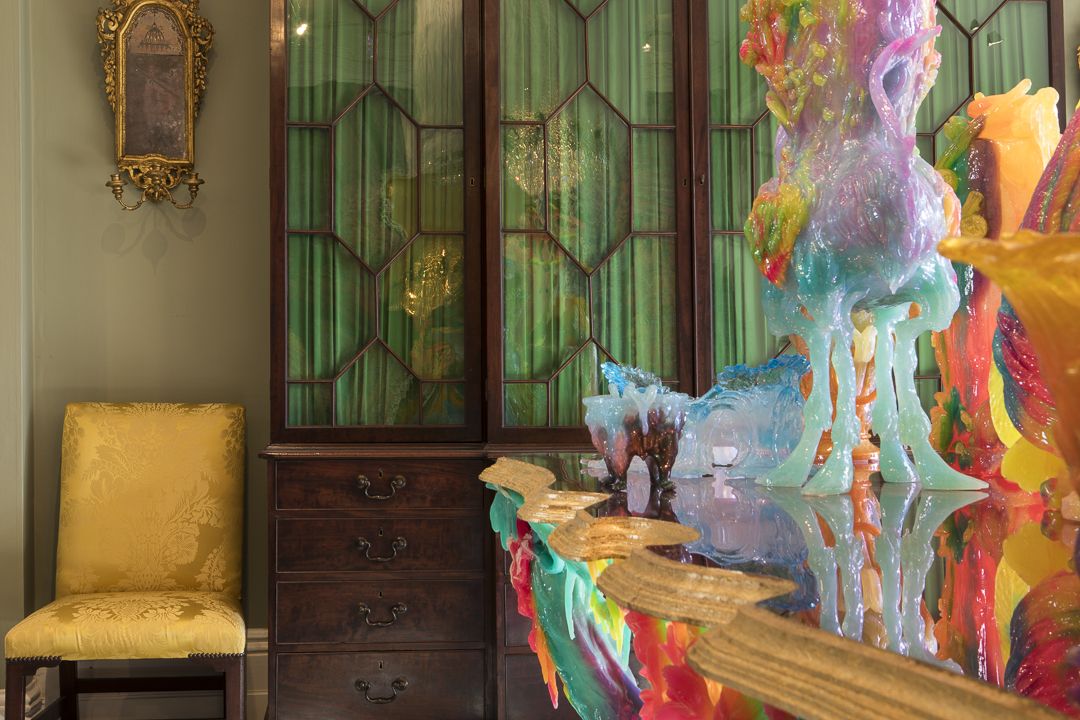 We're all part of the animal kingdom, appearing in what Darwin called "endless forms most beautiful and most wonderful". As part of our continuing 'house of ideas' series and through contemporary artists and historical objects, this audacious exhibition brings together and seeks out representations of animals which have continued to inspire and inform us over time.

In ANIMAL KINGDOM, exquisite animal-inspired objects from The Johnston Collection will be juxtaposed alongside fantastic creations by some of Melbourne's best contemporary makers including Kate Rohde, Troy Emery, Julia deVille, Vipoo Srivilasa, Alison Cole, Lesley Uren, and Yvonne Walton, in one magnificent show.

ANIMAL KINGDOM includes:
- An installation by Kate Rohde in The Green Drawing Room. Kate Rohde’s vividly colourful and elaborate work has seen her feature in a range of impressive exhibitions including Magic Object: Adelaide Biennial of Australian Art (2016); The Rigg Design Prize at National Gallery of Victoria (2015); and Flourish, TarraWarra Museum of Art, Melbourne (2008) among others. A skilled collaborator, Rohde’s work is familiar to visitors of The Johnston Collection from its inclusion in Romance Was Born’s guest curation of the museum in 2012. Rohde describes her work as “so excessive, with all the bling and mirrors; it’s shiny, loud, colourful and unashamedly decorative.”

- In The White Room, Troy Emery’s playful, fantastical and yet disquieting animal sculptures will be shown. Emery sculpts realistic animal figures with traditional taxidermy techniques, yet skins them in hyper-artificial and vibrantly coloured materials. His works explore the tension of animals’ existence as living yet decorative adornments; as wild creatures of nature yet domesticated and infantilized pets. Emery has seen his work exhibited in his solo exhibition From Far Away at Craft, Melbourne (2014) and in group exhibitions such as the Auckland Art Fair (2016); Glenfiddich Artist in Residence Prize, Carriageworks, Sydney (2015); and Fertile Ground, The Australian Tapestry Workshop, Melbourne (2014).

- Vipoo Srivilasa will show his playful and inventive work in The White Room. Srivilasa’s work is populated with characters in the predominate form of blue and white ceramics. His work explores his cross-cultural experiences between Thai and Australian culture, wry references to pop culture, and environmental concerns among other narratives. Srivilasa says that “Part of the fun of [my] work is in deciphering the tiny clues that I inscribe and leave on the figures. I hope that a curious viewer will linger and look closely for these markings.”Srivilasa’s extensive exhibition history includes the Gyeonggi International Ceramic Biennale, South Korea (2016); The Basil Sellers Art Prize, The Ian Potter Museum of Art, Melbourne (2016); Adrian Sassoon, COLLECT, Saatchi Gallery, London (2015); and New Blue and White, Museum of Fine Arts, Boston, USA (2013). His work is collected by institutions such as the National Gallery of Australia, Canberra; Parliament House Art Collection, Canberra; Queensland Art Gallery I Gallery of Modern Art, Queensland; and the Korean Ceramic Foundation, Korea.

- In The Yellow Room Julia deVille’s mesmerizing and thought-provoking work with its signature combination of jewellery with taxidermy will be displayed. Guided by her beliefs in the rights of animals, deVille only uses animals that have died of natural causes. Recalling the notion of memento mori and Victorian mourning jewellery, deVille’s says her work “is about death and life… and to be reminded [of their proximity] can be a positive thing.” Her work gently prompts her audience to reflect on the ethics of the treatment and consumption of animals, and firmly departs from the trophy-hunting history associated with taxidermy. DeVille has exhibited extensively in Australia and internationally. She was featured in Dark Heart: 2014 Adelaide Biennial of Australian Art, Art Gallery of South Australia, Adelaide; Melbourne Now at the National Gallery of Victoria (2013/14); and Theatre of the World, Museum of Old and New Art (MONA), Hobart (2012). Her works are held in public and private collections internationally and she is represented by Sophie Gannon Gallery, Melbourne.

- In The Bedroom, Alison Cole, a highly skilled stumpwork and goldwork embroiderer who has practiced in the field for thirty years, will exhibit her work based on mythical creatures including the unicorn, the gryphon and the Welsh red dragon. Cole exhibited at The Johnston Collection in 2003 and again in 2006. In addition to writing and teaching extensively, Cole was featured in the public programming for the exhibition Exquisite Threads, National Gallery of Victoria (2015) and was commissioned to create work for the House of Dior, Paris, France.

- Embroiderer Lesley Uren’s work will be on display in The Sitting Room and The Study. Uren’s embroidery is renowned for its fine gold and silver metal thread work and her favoured motifs of native Australian flora and fauna. Uren is a senior statesperson of the embroidery world having attained her Diploma of Needlecraft in 1957, being a founder of Embroiderers Guild Victoria and honoured with an Order of Australia in 2013 for her services to the arts and crafts and as an educator. Her work has been the subject of a solo exhibition at the Castlemaine Gallery, Victoria (2003) and at the Buda Historic Home and Garden at Castlemaine (2014).

- Embroiderer Yvonne Walton is well-known for creating a compendium of insect life published on leaves of fabric. Her intricate tiny insect worlds drawn with thread and bead are on display in The Study.

The contemporary works in ANIMAL KINGDOM are displayed against the back-drop of William Johnston’s extraordinary collection of Regency, Georgian and Louis XV furniture, paintings, ceramics and objet d’art arranged in a domestic setting. Visitors to this exhibition will see the many references to animals within the collection highlighted - including the decorative features of furniture (such as ball and claw feet, camel back sofa’s, the ‘serpentine’ line of mahogany chests), in paintings, textiles (such as the polar bear rug), ceramics (such as on the many Staffordshire Pottery and Derby Porcelain) – and experience the habitat of the Fairhall ‘animal kingdom’.

William Johnston (1911 – 1986) was a prominent 20th century antique dealer and collector who bequeathed his former residence, Fairhall, and collection to the people of Victoria.
Since it first opened to the public in 1990, The Johnston Collection has commissioned and exhibited contemporary art and design in dialogue with its historic collection. This regular program of re-installation and intervention of the permanent collection has enabled the museum to continue to attract new audiences and repeat visitors through its doors.