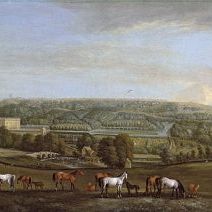 We celebrated the 300th anniversary of the birth of ‘Capability’ Brown in 2016. Brown was the key genius behind the development of the English landscape garden style which swept over Europe and the USA and continues to dominate a great deal of Western garden design today. It brought the "sublime and the beautiful" from painting into the landscape in a revolutionary way. He was involved in no less than 140 different British gardens.

In our first lecture we look at Brown's life and art, and especially the great gardens of Blenheim and Petworth, perhaps his greatest achievements.

DR IAN GEORGE AO has been an art critic and historian since the 1960's. His postgraduate work was in aesthetics. Since then he has served on the Visual Arts Committee of the Festival of Perth, as a Trustee of the Queensland Art Gallery and Vice-President of the Queensland Festival, had two terms on the Community Arts Board of the Australia Council and is a regular lecturer at the National Gallery of Australia, the Art Gallery of SA and the National Gallery of Victoria.