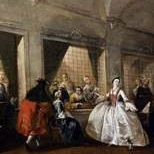 THE MYTHS OF VENICE with Sylvia Sagona

This alluring city of angels, rising out of the waters and hovering on the border between East and West wove miraculous legends about herself, and played them out in extravagant masked pageants which drew tourist crowds from the Middle Ages onwards. Her painters and poets alike celebrated the myth of Venezia, which successfully blended the contradictory stories of Venus rising from the sea with the Annunciation of the Virgin Mary.