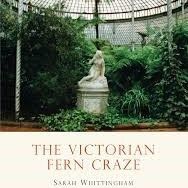 Fern Fever (or Pteridomania, to give it its official name), hit Britain between 1837 and 1914 and peaked between 1840 and 1890. Although in previous centuries ferns played an important role in customs and folklore, it was only in this period that they were coveted for aesthetic reasons and that man's passion for them reached its zenith. The craze for collecting ferns reached such epidemic proportions that it affected the very existence of some species. The fern craze started to gather momentum in the 1840s; books and magazines maintained that fern growing was a hobby that anyone could enjoy as ferns would grow in the glazed fernery, garden, shady yard, window box or even indoors in Wardian Cases. The mania also spread from the living plant to depicting it in architecture and the decorative arts. Even roads, villas and terraced houses were named after the fern. This book, the first to deal exclusively with the subject for nearly forty years, looks at the how the craze developed, the ways in which ferns were incorporated into garden and home, and the spread of the fern through Victorian material and visual culture.  Softcover.