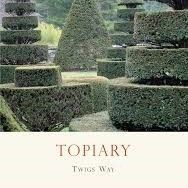 Topiary, the art of creating sculpture in clipped plants, originated with the Romans, who employed 'toparii' to clip their hedges. The fashion traveled throughout Europe in the Renaissance, using rosemary, lavender and hyssop as well as the more traditional evergreens of yew, holly, myrtle and box. Louis XIV's Versailles was a triumph of art over nature, and in the low countries cone and lollipop shapes formed, and soon hopped around the globe to populate the gardens of England and America. However, as the fervor for 'natural' landscapes swept through Europe, eighteenth century nurserymen were left with serried ranks of overgrown topiary figures. Fashion mocked the few gardeners who continued to clip, and in 1890 William Robinson claimed that 'a man with shears in his hands is doing fool's work. But as 'ye old Englishe garden' found favor again, so the chess pieces, crowns and artful peacocks broke cover, often claiming an unbroken history of clipping by generations of gardeners. Even Gertrude Jekyll, that doyen of the flowery border, had her favorite topiary yew cat. Despite box disease and labor shortages, topiary has seen a revival in the twenty-first century, and amateurs in the art can purchase 'preformed' rabbits and deer to graze suburban lawns.