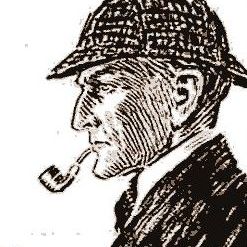 SHERLOCK HOLMES | A collection or an obsession? with John Byrne

What, if any, is the connection between Samuel Johnson & James Boswell and Sherlock Holmes & Dr Watson?

Both pairs of men are forever linked in our minds and appear alive to us through and by their friendship. But Johnson and Boswell were actual historical figures who lived in 18th century England whilst Holmes and Watson sprang, fully formed, from the fertile imagination of Arthur Conan Doyle a century later. Holmes & Watson are currently the subject of two high ranking television programmes whilst Johnson`s last appearance was as a figure of fun in an episode of "Blackadder". Why is this so and is it a just treatment of two towering figures of 18th century literature? Is Watson a "Boswell" to Holmes?

John Byrne is known to you as a collector of Johnson & Boswell but he is also an avid Sherlockian (as are many Johnsonians). He will tell you why this is so and will display treasures from his library to illustrate his lecture. Those attending are encouraged to wear "deer stalkers"!

JOHN BYRNE is a retired solicitor and founding member of the Johnson Society of Australia. He is currently a Governor of Dr Johnson's House, London, former President of The Johnson Society, Lichfield, England (2008-9), and former President of The Samuel Johnson Society of The West USA (2008-9). He has been a Johnson collector for over four decades and lectured widely in USA, UK and Australia. His most recent lecture at The Johnston Collection was DREAM LIBRARIES | My own & those I have visited.