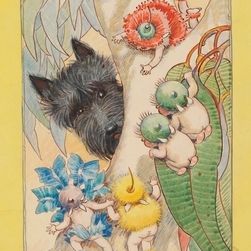 Scottish settlers arrived in Australia with the First Fleet in 1788 and currently represent 8.3% of the population with Scots ancestry the fourth most commonly nominated by Australian residents. International Tartan Day is celebrated annually on 1 July and a strong Scottish cultural presence continues to be found throughout our history and within our public collections.

This talk will highlight Australian expressions of Scots nationalism as represented though depictions of motifs such as tartan, heather and the thistle in the State Library of NSW, and including the story of the 1988 Bicentenary design competition for Australia’s National Tartan.

MARGOT RILEY is a cultural historian with special interest in textiles and dress. From 1992-1994, she completed the Masters in Museum Studies Program at the Fashion Institute of Technology in New York and, since her return to Australia, has been working as a Curator with the collections of the State Library of New South Wales in Sydney. Her previous talk at the Collection was FINE FEATHERS MAY MAKE FINE BIRDS, but do they make fine ladies? (2015).