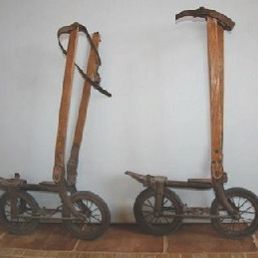 ROAD SKATES AND A HISTORY OF THE WORLD with Valerie Krips

When Neil MacGregor and the BBC produced a series of programmes about the history of the world told through 100 museum objects, radio was, rather surprisingly, their chosen medium.

The result was an astonishing success. Many thousands of objects were uploaded to the website, including these road skates. This talk discusses the choice of radio as a medium, and the objects chosen to provide a history of the world, and of individual lives.

VALERIE KRIPS, who lives in Melbourne, retired from the University of Pittsburgh in 2006. She is a Fellow in the School of Culture and Communication at the University of Melbourne. Her book Perfect Charity, written with Mary Clark and Heather O’Conner, was published by Morning Star Publishing in 2013.