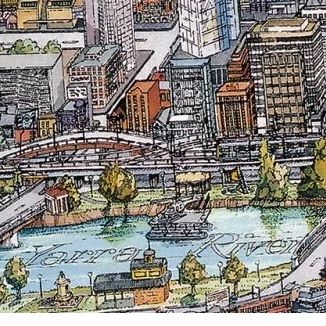 Pictorial maps have been used and admired since the first medieval cartographer put pen to paper depicting mountains and trees across countries, people and objects around margins, and sea monsters in oceans.

You may have seen AC Cooke & Samuel Calvert’s 1880 illustration of Melbourne, and if you were around in the 1990’s it’s likely you remember The Melbourne Map, inspired by that first etching and produced by two young Melburnians, Melinda Clarke & Deborah Young.

Join Melinda Clarke, Deborah Young and Lewis Brownlie as they describe the journey of mapping in the digital age, and the joy of discovering and documenting Melbourne all over again.

MELINDA CLARKE is the driving force behind the Melbourne Map published in 1990. She’s now on a quest to bring the enormously popular image back to life including all the new infrastructure, buildings, sporting arenas, parks and add a few more suburbs to the drawing.

DEBORAH YOUNG is an artist and garden designer who first joined the team in 1987. She designed and drew the original character line drawing for the first edition – The Magic Melbourne Map. This historic view of Melbourne is held in the State and National Library archives, Historical Society records and adorns the walls of many a home and business around Melbourne and indeed the globe.

LEWIS BROWNLIE is a new recruit. He has spent the last couple of years drawing Melbourne, one building at a time, attracted to the older colonial feel of his own past. Usually making artworks on location from direct observation - he finds this the most fulfilling method of capturing the feel of a place. He produced a colouring book of the city of Melbourne and more recently a colouring book of Fitzroy Gardens & Cooks Cottage – and a portrait of Fairhall and William Johnston’s cup for The Johnston Collection.

image:detail from the Melbourne Map, 2017