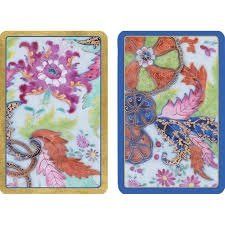 These sets of playing cards contains two beautiful card decks. They feature designs from museums and artists around the world, and are as attractive on display as they are in use.   This vivid design from a Chinese export porcelain dish in Colonial Williamsburg’s collections is popularly called “tobacco leaf.” However, it was actually inspired by Asian plants as depicted on Indian textiles and was a fashionable import into the American South in the late 18th century—early global chic. Game (Playing Cards):