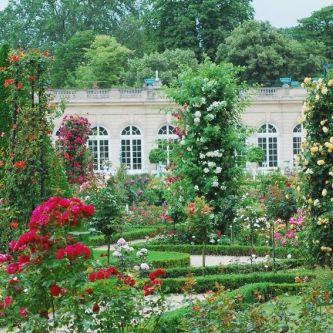 French gardeners such as Lenôtre were famed for their imposing geometric style showcased at Versailles. So when something unusual and whimsical was called for the French Royal court turned to a Scottish gardener, Blaikie.

When the Comte D’ Artois, brother of Louis VI, made a bet with Marie Antoinette about creating the Bagatelle gardens, he called in Blaikie to pull it off. The extraordinary Parc Monceau complete with grottos and ruins, was also designed by Blaikie for the Duc d’Orleans.

Josephine who considered herself a trendsetter commissioned Blaikie to design the gardens of Malmaison in the fashionable English style at a time when her husband Napoleon was at war with the British.

Over the centuries France and Scotland have often been allies against their common enemy; the English. Indeed, during the 100 years War, Joan of Arc was supported by Scottish guards in her victory over the English at Orleans. It would be Scottish spies employed as mapmakers for Henry VIII who would supply the French with vital intelligence for a thwarted invasion. When Mary Queen of Scots, who had been brought up at the French court, married the Dauphin of France, there were hopes that the two countries would be finally united. She brought the French language and customs to the Scottish court.