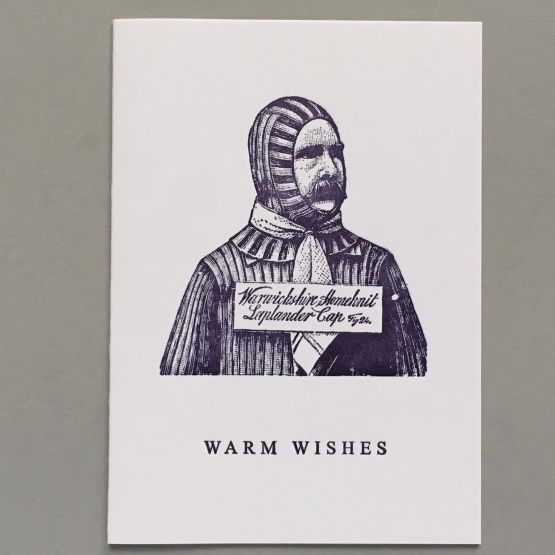 The Balaclava Sleeping cap. Warm Wishes no. 017 General price list,1908, Army and Navy Co-operative Society Ltd; University of Glasgow Archive Services.The house of Fraser Archives:GB248 FRAS KEYHOLE COLLECTION CARDS bring art and history together in hand-crafted letterpress greetings cards which are bold and beautiful, thought-provoking and tactile. Every card gives a new lease of life to images that have been tucked away in archives, museums, library’s and special collections. They show images that may be of small or great importance. Images that give a glimpse of the past with a quirky, contemporary edge.   Formed in London in 1871 as the Army and Navy Co-operative Society by a egroup of military officers to supply consumer goods at the most reasonable prices, the Society grew steadily and received many requests to serve the needs of homesick military personnel and civil servants in India wanting something from ‘Home’. The Society regularly published an illustrated price lists of all the goods sold by the Society, arranged by department. In 1872, the price list was published quarterly and could be obtained at the store or posted on application to the secretary after payment of postage. The volumes also include lists of the patrons, directors and officers of the Society, the general rules and regulations of the Society, details of the store, information on ordering, discount tables and advertisements. Army and Navy stores were found throughout the UK and India and there was also one in Karachi. John Richardson writing in his book ‘The Sorcerer’s Apprentice’ remembered the importance of the A&N Stores “At its height — between 1890 and 1940 — the Army and Navy Stores was more than a mere emporium: it was a key cog in the machinery of the Empire. The two greatest jewels in the Stores’ crown were the enormous branches in Calcutta and Bombay, which functioned as travel agents, bankers, caterers, undertakers, and insurance brokers, as well as purveyors of the pith helmets, thunder-boxes, plum puddings, and all the other myriad things listed in the Army and Navy’s catalogue, which ran to more than a thousand pages. This catalogue was the bible of the British Raj. Kipling’s Mrs. Vansuythen and Mrs. Hauksbee would have been unable to function without it.” UNIVERSITY OF GLASGOW ARCHIVE services hold internationally important collections of business records covering the whole of Scotland and beyond dating from the 18th century to the present. These reflect the contribution and breadth of activity that Scotland’s business, industry and enterprise has made, and continues to make, to the world economy. THE SCOTTISH BUSINESS ARCHIVE covers almost all types of business and industrial activity in Scotland and the UK with over 400 collections from banking, confectioners and distillers to retail, solicitors and undertakers. Our holdings are particularly strong in relation to industrial concerns in the west of Scotland such as shipbuilding, railway locomotive manufacture, textiles and mining. They contain a wide variety of records including minute books, financial ledgers, legal documents, marketing material, production papers, staff records and photographs, providing invaluable insights into all areas of business activity.