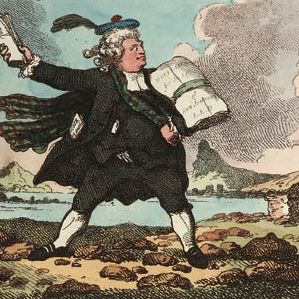 A JOURNEY TO THE WESTERN ISLANDS OF SCOTLAND with John Byrne

A Journey to the Western Islands of Scotland (1775) is a travel narrative by Samuel Johnson about an eighty-three-day journey through Scotland, in particular the islands of the Hebrides, in the late summer and autumn of 1773. The sixty-three-year-old Johnson was accompanied by his thirty-two-year-old friend of many years James Boswell, who was also keeping a record of the trip, published in 1785 as A Journal of a Tour to the Hebrides. The two narratives are often published as a single volume, which is beneficial for comparing two perspectives of the same events, although they are very different in approach - Johnson focused on Scotland, and Boswell focused on Johnson. (Boswell went on to write a famous biography of Johnson.)