WALK & TALK | The Shrine of Remembrance 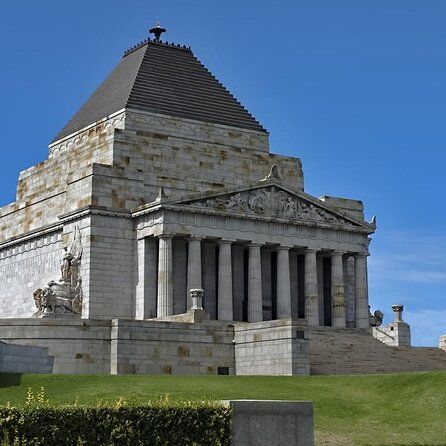 WALK & TALK | The Shrine of Remembrance

The Shrine of Remembrance is Melbourne’s war memorial, located in Kings Domain on St Kilda Road. It was built to honour the men and women of Victoria who served in World War I, but now functions as a memorial to all Australians who have served in any war

The Sanctuary inside the memorial is the Shrine’s most important space. Each year, thousands attend commemorative ceremonies to remember the sacrifices of Australian service men and women. The Stone of Remembrance is in the centre of the Sanctuary and it is symbolic of a gravestone for those Victorian servicemen and women buried overseas and in unmarked graves.

Fighting in the First World War ended at the 11th hour on the 11th day of the 11th month of 1918. Each year on this day, Remembrance Day, a natural ray of sunlight enters the Sanctuary to shine on the Stone of Remembrance. At 11am (Eastern Standard Time) it illuminates the word LOVE.

Join with The Friends to discover the fascinating history of this monument born by grief after the First World War, and now providing a place of remembrance for Australian service and sacrifice in all wars since. Learn about all the commemorative spaces, special exhibitions and the personal stories that make the Shrine a living monument.